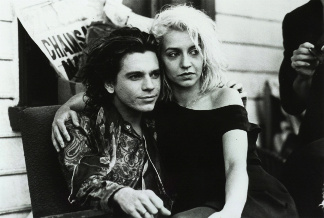 In early 1985, during promotional interviews for his new group, Beargarden, Sam Sejavka told Juke magazine’s Robbie Coates that “Richard Lowenstein, the video maker”, had recently suggested that he “wanted to make a movie about my life. I suspect he was winding me up or something.” (1)

If Lowenstein had described the film he was about to make, Dogs in Space (1986), in those terms, he certainly was winding Sejavka up; the film Lowenstein was conceiving was much more of an ensemble story, and the character ostensibly based on Sejavka remains something of a cipher, rather than a man whose life is being told.

Indeed, critics describe the film as formless and plotless. While such a summary might not be intended as harsh, it is a misrepresentation.

Many Melbournians of a certain age and background have tacit connections to Dogs in Space. I am one of them, through friends of friends and relations. For me, these connections – and more broadly, a music scene I followed closely, representations of living styles and scenarios not entirely dissimilar to my own experience in the early to mid 1980s – made the film difficult to enjoy on its original release and later, through a variety of repeated viewings, hard to resist. Over time, elements of Dogs in Space that initially appeared tokenistic or unfairly satirical have come to be amongst the most richly symbolic and valid components of a multi-faceted and open-ended (though hardly “formless”) celebration and eulogy.

Some important aspects of Dogs in Space are not immediately obvious. These contribute to the confusion around its perceived “plotlessness” and its mooted status as a docu-drama. Perhaps the most important of these, for a historian like myself, is Lowenstein’s intention that the film not represent 1979, but a number of years in the life of the household, beginning in 1979. This is not overtly stated, but understanding the film as a time progression of years, rather than a series of almost interchangeable events, is rewarding. The “docu-drama” element is highly problematic. Like Michael Winterbottom’s 24 Hour Party People (2002), which appeared two decades later but dealt with approximately the same time period, individuals from the “scene” represented in Dogs in Space play themselves or, more commonly, their contemporaries. Thus, Hugo Race plays a character called Pierre, presumably based on the bass player known as Mr Pierre, Pierre Voltaire, or Pierre Pierre. Further confusion, less justifiable, comes in the central character of Sam (Michael Hutchence). There has never been any doubt (except in the minds of some international fans of the film who believe, with no basis other than ignorance, that Sam is based on Nick Cave) that this character is modelled on Sam Sejavka. The group Sam sings in, Dogs in Space, is similarly modelled on Sejavka’s band, The Ears. Sejavka and Lowenstein fell out during the making of the film due to Sejavka’s objection to the depiction of Sam introducing Anna (Saskia Post) to heroin; Christine Harding, Sejavka’s girlfriend, overdosed in 1981 and the film is dedicated to her. Though Sejavka has not said as much, he might also have validly objected to the imputation, at the film’s impressionistic finish, that Anna’s death was mere grist to his creative mill, and that his primary interest was the pursuit of a conventional rock career.

I was a volunteer announcer on the community radio station 3RRR in 1985 when Lowenstein’s call came out for people to appear in crowd scenes in Dogs in Space. Whatever little experience I had of the world at that time, I cynically felt that Lowenstein’s request that extras should wear clothes they would have worn in 1979 would be largely disregarded. Instead, I was sure, the majority of those involved would opt to either wear the clothes and haircuts they wished they’d sported in 1979, or which looked cool in 1985 without, perhaps, looking obviously mid-1980s. I mention this simply to underline the fact that the time lapse between the film’s production and some of the scenes conveyed within it was in some respects a yawning chasm, and in others so ridiculously brief that perspective was almost impossible to achieve. The changes the Dogs in Space world had undergone are perhaps best demonstrated by the well-known story of the house in Berry Street, Richmond, where much of the filming took place. Since the events of the film, the house had been entirely gentrified. The film’s producers rented it, “de-renovated” it for the film and then re-renovated it for the owners. The backstreets of Richmond had moved on and “trendification” was truly on the march.

Sejavka has a very engaging and wide-ranging blog, Sails of Oblivion. Here, amongst ruminations on politics and art, as well as his own family life, he has periodically retyped sections from his diaries of the Dogs era, including the death of Harding and its impact. He and Lowenstein have recently reconciled, and he has written lately of reminiscence sessions conducted for the purposes of providing additional material for the Dogs in Space reissue on DVD. Inspired by these discussions, he writes of late 1970s Melbourne:

Twenty five years ago, it was a smaller, greyer, far more conservative city. There were no street cafes. Restaurants rarely had bars and you could count on two hands the number of 24 hour establishments. You’d be hassled for wearing hats in pubs and chastised by war veterans for wearing second hand medals on the tram. You could get beaten up as a poofter for wearing anything even remotely peculiar. The only alternative scenes were the sluggish festering hippies in Carlton and Fitzroy, a gaggle of Maori drag-queens in Fitzroy St, and the tribes of skinheads and sharpies in Holmesglen and Bayswater. Musical offerings included pub rock, more pub rock and maybe a bit of flaccid folk rock.

Into this dead zone stepped a new generation inspired by the punk movement in London, New York and Detroit. But it was not just the music. Because the city was smaller, because it was so disobliging of strangeness, there was a tendency for the weirdos to find each other and congregate for safety […]

An example I like to use involves the freakish hair colours most of us sported to varying degrees. In the Melbourne of 1980, if you caught sight of someone across the street with dyed purple hair, the odds were you’d know them. The scene was that small. (2) 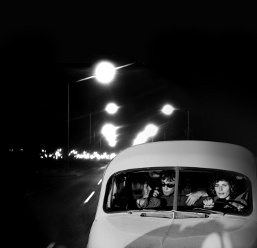 Sejavka is older than me (and he’s surely talking about 30 years ago, not 25), so I’m not qualified to debate this memory. However, I will say that he is indulging in a perhaps wilful unknowingness about previous generations of young Melbourne “scenes”. It is no negative comment on Dogs in Space to say that it is one more in a sequence of fiction-faction narratives that have captured various incarnations of bohemian and often nihilistic youth culture in Australia and, for that matter, Melbourne. Pertinently, as it has also just been reissued in a DVD pack that does it justice, Bert Deling’s 1975 film, Pure S…, is a similar rollicking drug-themed film that involves an anti-establishment, larger-than-life group of twentysomethings careering around Melbourne, briefly interfacing with the “real world” and, importantly, its media before turning back in on itself. In an interview included in the Pure S… pack, Lowenstein says he was “infected” by both the “energy and content” of Pure S… in the making of Dogs in Space; he also, importantly, recounts a story of reading Helen Garner’s novel, Monkey Grip (1977), and realising that he was, at that time, living in a house where much of Pure S… was filmed.

Prior to Pure S… and Monkey Grip were the early 1970s short films and videos of Chris Löfvén, included as bonus features on the DVD of his remarkable Oz (1976); here, a slightly earlier group of rebellious youth explore the same superficial interface with inner-city Melbourne. Lines can be further traced back to 1960s films memorialised in Nigel Buesst’s documentary, Carlton + Godard = Cinema (2003). Buesst was a lecturer of Lowenstein’s at Swinburne College, and showed Pure S… to his class.

Michael Hutchence, who plays Sam in Dogs in Space, is rumoured to be the film’s entire raison d’être, insofar as Lowenstein was able to get funding only on the basis that Hutchence would star. Lowenstein has suggested that the original “pitch” of the film to a major producer was spontaneously created by Lowenstein with Hutchence’s collusion, though other sources suggest the process was more considered.

For Hutchence, already a major pop star, this was a chance to establish himself as something other than a component of an increasingly internationally successful, but nonetheless somewhat musically mundane, stadium rock group. It was also a chance for him to recreate himself, and become identified instead with a more cool and gritty backstory than the reality of a life of relative privilege, in Sydney’s northern suburbs and in Hong Kong, notwithstanding his dubious claim that, on leaving school, he had “nosedived into the underground” (3). There seems little doubt that the other members of INXS, and the group’s management, were alarmed by their singer’s drift to other projects: Dogs in Space was followed by a spin-off musical project, Max Q, a collaboration between Hutchence and the musical director of Dogs, Ollie Olsen (INXS’ Andrew Farriss showed the extent of his regard for Dogs by making and releasing, of all things, a fishing video entitled Fish in Space). It is worth bearing in mind, when watching Dogs in Space, that it was in many respects (for instance, presumably in the eyes of many who went to see it) a star vehicle for Hutchence, and used by him as such; and that the film thus represented a drawing of the late ’70s underground scene into the mainstream limelight. As subjective as Sejavka’s musing, above, might be, the fact remains that his late-’70s coterie was still contentious in the mid-1980s and its grittiness was an unlikely subject for celebration. It is part of Lowenstein’s brilliance in Dogs in Space that he manages nonetheless to make (most of) his characters appealing despite this.

Finally, the music in Dogs in Space: the film’s soundtrack album – which appeared in two incarnations, a censored and an “R-rated” version – includes selections from international acts of the late 1970s (Gang of 4, Iggy Pop) who have gained great cachet in recent years, and local groups, most of which were specially recreated for the album’s soundtrack. These groups have occasionally been misleadingly described as belonging to the “little bands” movement of limited lifespan configurations; in fact, a group like the Primitive Calculators, who recorded an album, could not be described as a “little band”, however much they may have fellow-travelled with that movement.

As anyone who has heard the singles by The Ears – “Leap for Lunch” and “Scarecrow” – can attest, the version of this band recreated for the film as Dogs in Space is particularly unrealistic. The song “Golf Course”, which appears in the film and on the soundtrack, is shambolic in a most unpleasant way: Hutchence, who was a professional, is understandably challenged when required to sing “badly” and the song’s component parts – The Beatles references, absurd synthesiser “lead break”, excruciating backing vocals – make a shabby mess. That Dogs in Space (the band) are plainly so incompetent compared to others in their cohort – such as the impressive but largely unexplored Thrush and the Cunts – is an unexplained quirk of the film.

The film’s flaws are, ultimately, minor. One did not have to be there or have sentimental feelings for the time to appreciate that Dogs in Space has improved with age, its director-writer Lowenstein wiser about the milieu represented than even he, perhaps, recognised. As an ensemble piece conducted by professional actors (Chris Haywood, Nique Needles, Saskia Post), non-actors (the various musicians and other discoveries such as Deanna Bond) and mere performers (Hutchence), its dynamics are brilliantly effective. The Dogs world is self-contained and fantastic; as a celebration of all the angst and ebullience of youth, it is universal.

Dogs in Space will screen at the Melbourne International Film Festival on Saturday 1 August at 7:00 PM.