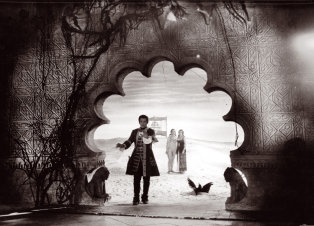 In M. C. Escher’s delightfully baffling lithograph from 1960, “Ascending and Descending”, monks simultaneously trudge up and down a square series of stairs at the centre of a building equipped with a spire and odd-looking puffy objects that look like large pillows. Archways below suggest the kind of building curious children might want to explore. The stairs, at the top of the structure, surround a courtyard that Escher doesn’t show us. Inside this odd building might be more tricks, and not just of the eye. Are the monks escaping? Observing a daily routine? Maybe on an unending journey to nowhere? All the clues are before us, yet we make of it what we want. Escher’s triumphant trompe l’œil forces us to question what lies before us, even to ask, “Is that what I’m really seeing?”

Mixing elements of Homeric epic, the quest of the Grail legend (with Spain substituted for the chalice) and Mack Sennett’s Keystone Cops, Wojciech J. Has’ sumptuously braided, wildly farcical and surprisingly philosophical Rekopis znaleziony w Saragossie (The Saragossa Manuscript, 1965) raises the same kinds of unanswerable questions and takes its hapless protagonist, Alfonso Van Worden (Zbigniew Cybulski), on a similar, seemingly never-ending journey. Written by Tadeusz Kwiatkowski, the film is based on The Manuscript Found in Saragossa, a dazzling novel of adventure, magic, evil and sensual delights populated by men who somehow survive their own trips to the gallows, soldiers of misfortune, fools, wicked spirits, beautiful women, wise men and others not so wise, dozens of creepy skulls and enough dreams and nightmares to keep an army of psychiatrists busy. Written by the Polish raconteur and aristocrat Jan Potocki (1761-1815), the novel is an expansive series of stories – and stories within stories – heard by Van Worden, a dashing Captain of the Walloon guards, over 66 days as he makes his wayward way to Madrid during the Spanish Inquisition. The book has been compared to The Canterbury Tales, The Decameron and One Thousand and One Nights, though it is not nearly so well known – rather like Has’ film. In fact, The Saragossa Manuscript is the only one of his 26 films available on DVD, according to the Internet Movie Database, making any screening of Has’ rarely seen three-hour epic a true cinematic event. The film masterfully captures the episodic form of Potocki’s novel while expanding it into a visual phantasmagoria of images bleak and lush, frightening and erotic, nuanced and glaringly obvious. Has uses a stock of recurring thematic devices to create a careful balancing of reality and dream. The film, which was released on DVD in 2002, will be screened four times at the Australian Centre for the Moving Image in Melbourne from 30 October till 2 November.

Has (1925-2000) is one of Poland’s most highly regarded filmmakers. According to culture.pl, from 1990-1996 Has was Chancellor of the Leon Schiller National Film, Television and Theatre School in Lodz. The school spawned such luminaries in Polish film as Andrzej Wajda, Andrzej Munk, Janusz Morgenstern, Kazimierz Kutz. Later, Roman Polanski, Henryk Kluba, Janusz Majewski, Jerzy Skolimowski and Andrzej Kondratiuk attended. The school remains at the centre of Polish filmmaking.

The film opens as war rages in Spain during the Napoleonic Wars. A soldier finds safety in a bombed-out house, but he finds something else: a thick manuscript illustrated with woodcuts, two of which seem to foretell the adventure that is about to begin – an illustration of a pair of gallows from which two men dangle and a pair of voluptuous women. He is entranced, as is his French captor, who delights in the book as much as his captive. The captor starts reading the text and realizes it is the story of his grandfather, Alfonso Van Worden. In the first of many of the film’s flashbacks, the scene shifts to a gully between Andalusia and La Mancha. The year is 1739. There, a captain of the Walloon guard, Van Worden, is planning his journey to Madrid with his two sidekicks.

They ride off and, before long, stop at a well and a long catalogue of odd happenings begins. Ghosts, suggestions of evil intervention and two men hanging from a gallows, exactly as the manuscript showed, confront Van Worden. In one of his most effective techniques, Has frames the scene using a tight close-up of snakes writhing next to a pile of skulls. This framing device is used to great effect throughout the movie. The exhausted and thirsty captain arrives at an inn and immediately drinks from a large carafe. He is welcomed by a beautiful maid, whose gown leaves one breast exposed. She leads him to a large chamber where two foreign ladies are waiting. They too are dressed seductively, and recall the other image Van Worden’s grandson saw in the manuscript. The women introduce themselves as Emina (Iga Cembrzynska) and Zibelda (Joanna Jedryka). They are Moors and are distantly related to the ancestors of the captain. They have never been with a man and state that they both want to be married to him and, not surprisingly, he is ecstatically overwhelmed. They dine and the women begin to tell their story. This narrative excursion leads to more … and more. Characters in stories throughout the film tell their stories even as the first storyteller is continuing his story. Van Worden drinks from a skull-shaped chalice and falls into a swoon. Are the two beautiful women real or part of a dream? Is what follows a dream or a real adventure? He promises to keep them a secret and, in return, they say that they will always be part of his dreams, suggesting more dream than reality.

The captain wakes up outside. Lying next to him are the two scrofulous corpses of the Zoto brothers: the hanged men. Hideous laughter and eerie sound effects add to an atmosphere of foreboding. He goes back to the inn, but this time for another adventure, new characters and new stories. He encounters the madman Pasheko (Franciszek Pieczka), who has a story. A wise monk (Ludwik Benoit), who has a story, asks a hungry Van Worden if he’s more interested in nourishing his belly or his soul. Van Worden ends up in the chamber again. He sees the gallows again. And he awakens outside – again – among skulls, weird sounds and the gallows. By necessity, Has masterfully edits Potocki’s sprawling 631-page novel, balancing fantasy and reality by training our eyes on repetitions and new elements. Van Worden is arrested by soldiers of the Inquisition, watches his father duel and hears more stories that wind in upon themselves, taking the viewer up the down staircase and vice versa. Watch out: you may pass yourself going one way or the other – or sometimes both ways at once.

Has divides his film into two parts. The second contains as many pleasant diversions as the first, but I hesitate to summarize further. To do so would ruin the effect and reduce this extraordinarily charming motion picture to a bland narrative. There are castles, chambers, maidens, odd fellows, noblemen, gypsies, vagabonds, good and evil, and more than enough questions, some of which are answered and some that the viewer will ask himself. The Saragossa Manuscript gives new meaning to the question: What happened?

In the end, a sheikh (played by the same actor, Ludwik Benoit, who played the monk at the beginning) explains to Alfonso what has been going on, who has been playing whom and why. But in a film like The Saragossa Manuscript, where magic, belief and an ambiguity about what is real figure so prominently in the tension, Has creates between his allegiance to the novel and the opportunity to set the novel’s stories before us like one of the smorgasbords he depicts on the screen, one must resist the temptation to wrap things up too neatly.

In most discussions of the film, we read about the role the late American rock musician Jerry Garcia and filmmakers Martin Scorsese and Francis Ford Coppola had in discovering the film and financing its restoration. According to the description of the film on the web site of the Film Society of Lincoln Center, Garcia, a member of the ’60s-era Grateful Dead rock band, saw the film in a two-hour version, was enchanted by it and learned that the three-hour version had never been seen in the USA. Garcia died before the project could be completed, but by that time (1995) Scorsese and Coppola had taken up the cause. Without their discovery and dedication, the film might have been relegated to an audience of a few Ph.D. candidates in film studies.

One of the many rewards of the film is the sound picture Has creates. Krzysztof Penderecki’s score is a triumph of atmospheric symbiosis in his reinforcement of Has’ images and light-hearted, rousing fanfares that serve as a kind of theme for Alfonso, particularly when he’s on horseback. At times minimalistic and consisting only of eerily suggestive percussive effects during the film’s many ghostly and otherwordly moments, its late Baroque and early Classical orchestral passages serve to echo the period during which the film travels. His music is also featured in Stanley Kubrick’s The Shining (1980) and William Friedkin’s The Exorcist (1973). David Lynch has incorporated the composer’s music in Wild at Heart (1990) and Inland Empire (2006). Fellow Pole Jerzy Skolimowski featured his music in Rece do góry (Hands Up, 1981). Penderecki also wrote the score for Has’ Szyfry (The Codes) from 1966. 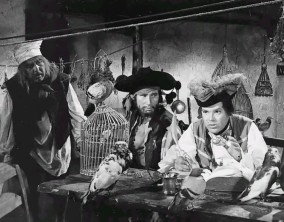 Anyone who’s sat on Grandpa’s knee to hear a story knows that there’s rarely just one, or even two, stories in his larder. Gramps is always good for a few yarns at the dinner table, particularly Thanksgiving, that most peculiar celebration of the autumn harvest celebrated in Canada and the United States, when an embarrassment of riches on the sideboard and swollen bellies cry out for some sort of divertissement. Suddenly, Grandpa’s stories, which we’ve all heard before, don’t seem so unendurable. At least they contain no tryptophans. Grandchildren invariably ask him to tell his stories again, and again, and again as the grownups endure. There are no tryptophans in The Saragossa Manuscript. But there are gallons of magic potion that Van Worden seems to consume at every turn. How else would he fall asleep so frequently only to wake up on the ground, meet a new character and start a new story?

At one point, Alfonso says to no one in particular, “It’s enough to drive you crazy.” First-time viewers of The Saragossa Manuscript might find themselves echoing the hero’s confusion. Has’ achievement is in rendering Potocki’s grand novel into a visually electric panorama of wildly entertaining characters, maddening shifts in narrative and its characters’ deliriously funny antics. The acting has its weak moments. I kept wondering during Pasheko’s over-the-top scenes if the actor, Franciszek Pieczka, was incapable (or too capable) of portraying madness and excess. But with so much excess around, who could be disappointed by having to ask such questions? Perhaps that’s part of Has’ genius. We are left wondering right up to the final frames if the ride over the next hill will land Van Worden in Madrid or under another gallows, surrounded by skulls and quenching his thirst with another carafe of magic potion. So is Van Worden. The sheikh tells him, as the soldier seems to grasp what has been happening to him, “The rest you will write yourself.” A comforting notion, though a frustrating one. We are left with the possibility that The Saragossa Manuscript is the audience’s story in a very real sense, that Has has just been playing at navigator. The quill is in our hands, to write an ending if we want, or, better, to write another story.