The Fighting Generation (1944) is probably one of the last Hitchcockian opuses still to be uncovered, if we accept that productions such as The Mountain Eagle and An Elastic Affair have been lost forever.

This extremely short propaganda film, produced to promote the sale of War Bonds, has been held at the Academy Film Archive in Los Angeles since the end of World War II. (1)

The film actually came into the Margaret Herrick Library during the war as part of the Academy’s mission to collect films. At that time, there was no Academy Film Archive, but its war film collection can actually be traced to that period.

Shot at the David O. Selznick Studios in a single day by Alfred Hitchcock on Monday, 9 October 1944, the film features a young nurse’s aide, played by Jennifer Jones, reciting a monologue written by Stephen Longstreet:

“He’s asleep now. His name is Johnny. Private First Class, badly wounded on Saipan. As a nurse’s aide, I see many cases like this. Most of them are strangers to me. But Johnny, well, we were kids together. Johnny took me to my first (high school) dance, and knowing Johnny, I feel I know all the boys here. You see, they’re my generation, part of my world, my fun, my hopes. Someday all the boys and girls will come back home. No, not all of them. But those that do, you can help bring them back sooner by buying a share of their faith in victory. By buying a War Bond. You know, they used to talk about the lost generation. The forgotten generation. Of generations without hope. But not Johnny’s generation. Please be like Johnny. He didn’t think he’d have to fight so many battles. But he went right on, giving a little extra courage. So let’s all of us do a little something extra too. And buy that Bond beyond the one we’ve planned for. Surely that isn’t too much to do for a fighting generation.”

This trailer runs just one minute 52 seconds (169 feet), with the action taking place in a hospital setting. During the opening credits, we see a nurse leaning over an injured man lying in a hospital bed, after which she turns to face the camera in close-up to recite her message.

The entire scene is designed to show the young actress to advantage, as well as to highlight the volunteer work she is involved with. 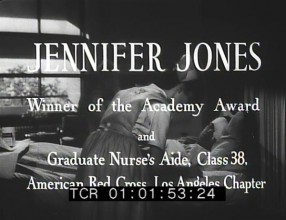 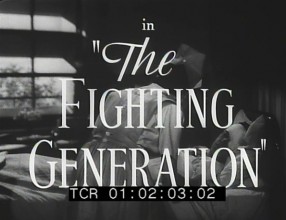 Jennifer Jones did actually graduate on 13 August 1943 from the American Red Cross, Los Angeles Chapter, Class 38, and showed a strong commitment to charity work in this capacity over the following years across the country, as did many other film industry personalities at that time.

In addition to this, the uniform worn by Jennifer Jones was by no means new to her, since she had already donned it – with great elegance we may add – in the film Since You Went Away directed by John Cromwell, which was successfully released in mid-1944. This film features a scene in which young nursing graduates participate in an oath-taking ceremony, played out in a rather pompous setting.

Jennifer Jones succeeds in making us empathize with the emotions of all these young women, no doubt because she had experienced these sentiments in real life only months earlier. 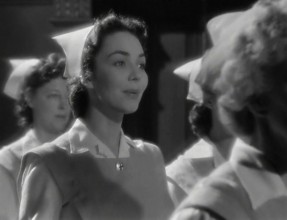 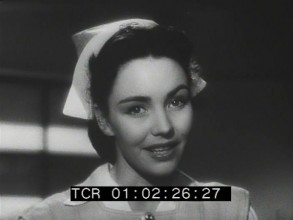 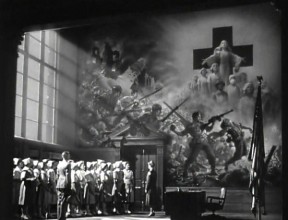 As we can observe (2) in the Vanguard Films call sheet dated 9 October 1944, other characters were also scheduled to appear in the scene, played by actors including Rhonda Fleming. Indeed Stephen Longstreet’s initial treatment included several scenes and several protagonists. (3) 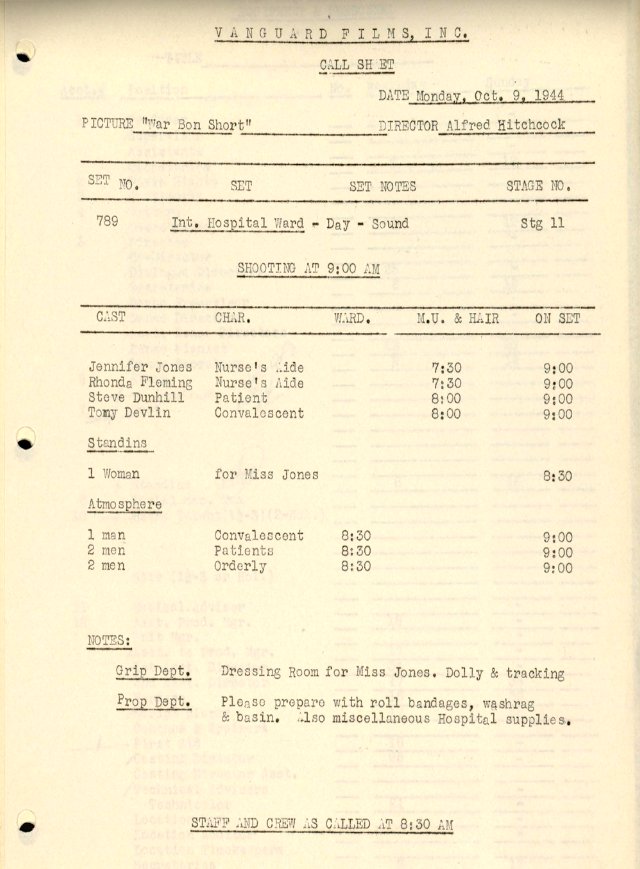 As it turns out, only Jennifer Jones appears on the screen, probably because David O. Selznick, maintaining ultimate authority over the final cut of the film, chose to focus on fostering the career of his latest up-and-coming actress, with whom he was no doubt already enamoured.

Indeed, he makes no effort to hide this in a telegram sent on October 23, 1944 to Mr. N. S., Director of Motion Pictures, War Finance Division: (4)

We have just finished editing and scoring of Bond short. I think I can honestly say that it looks superb. It runs one hundred seventy feet and I think it will do a great deal of good for the nurses’ aides as well as for the War Bond program. I assume that you will give the orders for the necessary footage, in accordance with our conversation. In as much as the short is a solo by Miss Jones, it could be very damaging to her career if the laboratory work destroyed the photographic quality which we were able to achieve-thanks to the commander [Gregg] Toland who photographed it. In view of this and the extraordinary pains to which we went to make this short, directed by Alfred Hitchcock, of first class quality in every respect and up to the standard of our very best pictures, I should sincerely appreciate if you would give instructions that the laboratory work is to be done with care, consistent with first class productions instead of with usual laboratory work which trailers receive. This is one favor that I ask on behalf of Miss Jones and ourselves and I shall be grateful for your assistance and for confirmation from you […]

His request was granted, and some 12,000 very-high-quality prints of the trailer were produced, distributed and screened throughout the country. Even prisoners at the San Quentin State Prison were shown the film, as reported by Ezra Goodman, “in order to keep the inmates posted on the latest developments of war”. (5)

In any case, the trailer was much appreciated by the authorities: (6)

Letter from the Treasury Department, Washington
War Finance Division on November 22, 1944
To David O. Selznick
RKO Pathé Studios
Dear Mr. Selznick
On Behalf of the War Finance Division of the United States Treasury Department and on my behalf, I want you to know how much we appreciate your production of the Sixth War Loan Trailer starring Jennifer Jones.
It was a fine contribution to our campaign. A great story was told in a few feet of film. When that story is magnified by the screens of 16,000 theaters, I know we will find that it has resulted in tremendous Bond sales,
Sincerely

Nonetheless, a problematic issue remains with regard to the film’s background music. Originally, it was specified that: (7)

Mr. Selznick suggested getting a track from Paramount’s “So Proudly We Hail,” particularly a scene where a boy dies and his mother talks about him […]
However, this idea was abandoned, and instead we hear a different score that includes at least one version of “The Battle Hymn of the Republic” (perhaps from the soundtrack of Gone with the Wind [Victor Fleming, 1939]?).

DOS lived up to his reputation for total control when he demanded the following: (8)

As we can see, his instructions were followed: 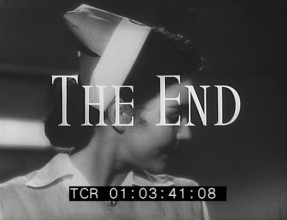 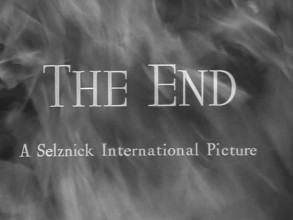 Apparently, neither Alfred Hitchcock nor Jennifer Jones were remunerated for their work on this project.

Hitchcock’s name does not appear on the credits, and it must be said that it is impossible to recognize his style, his particular signature stamp or even his sense of humour in this short film.

Did he simply wish to do David O. Selznick a good turn, or did the latter insist upon his participation in the film, which was made around the same period as Spellbound (1945)?

The fact remains that at the time of Alfred Hitchcock’s departure on his second trip to the UK that year (to meet with Sidney Bernstein to discuss editing at Transatlantic Pictures), David O. Selznick made a point of showing his irritation:

Telegram D.O. Selznick to Miss Jenia Reissar, 11 October 1944 (9)
[…] I should say that I am surprised by the discourtesy of seeking out Hitchcock for a second trip to England without so much as even contacting us which is something that would not be done with an American producer by even the United States government – STOP – I should also like it to be said that I hope that one of the motives behind bringing Mr. Hitchcock back to England is not a desire to negotiate a private deal with him for the future. Regards.

It is nonetheless clear that Hitchcock’s reputation with regard to money can be confirmed by two anecdotes from this production, although it must be remembered that, at this time, Hitchcock was not an American citizen.

Letter from 15 June 1942, from Mr. E. L. S. to Mr. Selznick (10)
[…] With the exception of Alfred Hitchcock, Alan Marshal, K.T. Stevens, and Phylis Walker (aka Jennifer Jones), everyone on the D.O.S.P. payroll has authorized a deduction, either weekly or monthly, for the purchase of U.S. War Savings Bonds.
Whitney Bolton has agreed to call on Hitchcock and impress upon him the importance of subscribing to Government […]

Letter from 3 July 1942, from Mr. E. L. S. to Mr. Selznick (11)
[…] If we succeed in getting Hitch to invest 10% of his salary in Bonds, we will also be over the top. Hitch’s last proposal to Whitney Bolton was that he would invest 5% of his salary in Bonds if Myron would invest 5% of his 10% commission in Bonds. This is a typically ridiculous Hitchcock proposal – According to Henigson, Myron personally is already purchasing a considerable amount weekly […]

Archival material can be cruel at times!

Pr Janet Staiger
The University of Texas at Austin

Christelle Le Faucheur
The University of Texas at Austin