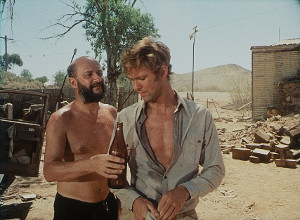 After decades of being little more than an exotic location for overseas filmmakers and production companies, Australia was shocked in 1971 with the release of two films that would forever change all notions about what should or could constitute an Australian Cinema.

They were, of course, Nicolas Roeg’s Walkabout and Ted Kotcheff’s Wake in Fright.

Roeg’s film, with its exquisite poeticism and mystical use of montage, proved somewhat easier for many to embrace than the brutal honesty of Kotcheff’s deconstruction of Australian mateship – an exploration not matched in intelligence or courage by any Australian filmmaker since.

Walkabout recently re-entered our hearts with a director-approved restoration (with a key scene re-instated) and a glorious DVD release. In contrast, Wake in Fright has been almost unseen for decades, with even late-night television screenings proving a thing of the past. But a glorious new 35mm print and soon-to-be-released DVD will see this magnificent film elevated to its proper position at the highest reaches of Australian Cinema. (See Gregory Stephens’ loving piece on Walkabout and Raffaele Caputo’s insightful interview with Wake in Fright’s Ted Kotcheff.)

A key film that prefigures both these classics is Norman Lindsay’s Age of Consent, the last film to be directed by the revered Michael Powell. Powell, of course, had been Down Under previously with They’re a Weird Mob (1966), one of the funniest comedies made south of the Equator, but there is a melancholic beauty in Age of Consent that gives it a special place in many people’s hearts. (Scott Murray examines the long-awaited DVD release.)

Now, while celebrating iconic Australian films of the past, one must also happily note the extraordinary success of Warwick Thornton’s début feature, Samson and Delilah. For decades, films about Aboriginals were exclusively made by white directors; today, there are brilliant Indigenous filmmakers (Ivan Sen is another) making movies about the lives of Australia’s oldest inhabitants and its spiritual guardians. We now have the glorious and unexpected situation where the most beloved – and commercially successful – Australian film of this year (so far) is an Aboriginal feature.

Moving away from Australian shores, there are many diverse cinematic delights to examine in Issue 51, ranging from Ken Mogg’s dazzling and meticulous analysis of Alfred Hitchcock’s The Birds to Sally Shafto’s affectionate look at Luc Moullet and John Orr’s thought-provoking exploration of the role trauma plays in British Cinema.

There is a much-needed Spotlight on Viviane Vagh, with five authors looking at her films and media installations, and an overview of Slovak Cinema by Peter Hourigan, who continues to chart in Senses a filmic culture that was momentarily and unfairly forgotten when Czechoslovakia split in two nations.

One could fill up the remaining column inches by listing all the beautiful pieces in this issue – all thanks, of course, to Senses’ wonderful and erudite contributors – but brief mention should be made on the state of the new website. It is now within days of completion and will be tested over the next few weeks for its launch with Issue 52.

Senses apologises sincerely for the unexpected delay, but hopefully all our readers will think the wait worthwhile.

In the meantime, there is Gwendolyn Audrey Foster’s re-examination of that troubling last film of the great Leo McCarey, My Son John, while Linda C. Ehrlich looks at Luis Buñuel’s …