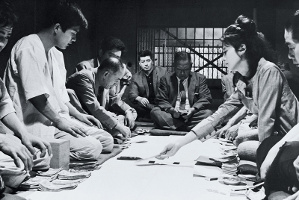 Like Imamura and Oshima, Shinoda Masahiro was a university-educated intellectual who was employed by Shochiku as an assistant director in the early 1950s and felt stifled by the company’s conservatism. But Shinoda was less openly rebellious than the other two and took the opportunity to learn a great deal about camera technique, editing and shot composition by working conscientiously as an assistant to all of the company’s leading directors.

At Waseda University Shinoda had specialised in theatre history and lacked training in visual art. When finally allowed to direct in the ’60s, he broke dramatically with Shochiku tradition by employing radical young poet (later noted underground playwright) Terayama Shuji to write scripts and emerging avant-garde composer Takemitsu Toru to compose discordant scores for his films. However, long after he had left Shochiku and had achieved critical recognition for his period set art movies (especially Double Suicide/Shinju: Ten no amijima, 1969), he admitted that he learnt a considerable amount when working under Shochiku stalwart Ozu Yasujiro, and had studied his methods.

Pale Flower/Kawaita hana (1) is both a genre movie and an art movie. It is a contemporary yakuza film, made at the start of the golden age of the genre (which lasted from 1963 to 1973), although it was Toei and Nikkatsu rather than Shochiku that became specialists in the genre. It stars Ikebe Ryo as the world-weary yakuza hit man, Muraki. Ikebe was often cast in supporting roles alongside stars Takakura Ken and Tsuruta Koji (Japan’s “John Wayne” and “Robert Mitchum”, respectively) in Toei yakuza movies. Its narrative, like that of many other yakuza films, opens with the hero’s release from gaol; involves gang warfare, shifting alliances, betrayals and reprisals; and features a young opponent who becomes the hero’s buddy and acolyte. But the hero loves a lady more than his buddy, and, unlike many examples of the genre, does not end up dead in his buddy’s arms after a sacrificial bloodbath. The film’s settings of bars, racecourses, gambling dens and dark streets are also characteristic of the genre, but Pale Flower is much darker than most – night scenes predominate and the darkness of night is weighted with symbolism. Shinoda does include the yakuza “cut-finger apology” ritual, but he is not interested in the giri-ninjo code that the yakuza genre inherited from the samurai movie. His hero is not motivated by devotion to his boss (both gang bosses are portrayed as stupid old men) or to any political or social code; he is a true loner, an existential outsider like Albert Camus’ Meursault. He is attracted to the mysterious young woman Saeko, whom he recognises as his soul mate, a fellow thrill-seeker bored with life. On the one occasion when he is tempted to consummate relations with her, he abstains, his motivation ambiguous. Is it because the man of action must repress sexual desire and not become emotionally dependent on a woman? Is it because sex would destroy the high romantic ideal she represents? Is it because he recognises the unbridgeable class barrier between them? Sex is available to him with Shinko, his regular woman, the woman who loves him, the woman he rejects. Shinko lives in her wicked stepfather’s clock shop where the clocks tick ominously and symbolically, almost as if they had escaped from an Ingmar Bergman movie. More culturally and generically incongruous are the repeated images of the “Mona Lisa” in the décor and the use of Dido’s aria, “Remember Me”, from Henry Purcell’s opera, Dido and Aeneas, to accompany the hero’s final grand gesture for his lady-love. The last exchange of looks between Muraki and Saeko suggests that the thrill of the kill surpasses, or at least substitutes for, sexual orgasm. This is part of a pattern established in the film, as they have previously shared the thrill of high-stakes gambling and high-speed driving.

The stunning romanticism of the assassination sequence – the majestic bearing and slow ascent of the hero to the arena; the removal and replacement of diegetic sound by an operatic aria; the choreography of the killing in dream-like slow motion; and the gazes of Muraki’s audience, buddy and lady, riveted by the spectacle, admiring his performance – is balanced by the cynicism of the epilogue. We see that Muraki’s grand gesture has changed nothing; he is, in the end, impotent and ineffectual. The two old gang bosses are still in charge; the girl is dead; and he is back in prison, serving out his sentence for murder.

Alongside the climactic operatic sequence, the film offers other set-pieces of breathtaking artistry, notably the gambling scenes involving the flower card (hanafuda) games and the hero’s nightmare. In the gambling scenes the composition of shots is very theatrical and formal; there are abrupt cuts from one set-up to another – ceiling shot, subjective shot, group formation shot, medium close-up – while the soundtrack features the metronome-like click-clack instructions of the caller. In the nightmare sequence, which precipitates Muraki’s offer to perform the execution of the rival boss, even though it isn’t his turn, the darkly discordant music of Takemitsu and the psychosexual imagery create a surreal vision of what Chris Desjardins calls “existential dread as a lived-in experience” (2).

Pale Flower’s script was adapted from a story by Ishihara Shintaro, the early post-war novelist who produced popular fiction about rebellious and delinquent Japanese youth, and whose works were regularly adapted to the screen. He was not a great writer – Mishima Yukio called his style “a hotchpotch of rough-hewn brevity and romantic babble” (3) – and he eventually abandoned writing for a political career, becoming a right-wing Japanese nationalist. With the inspired assistance of Kosugi Masao’s widescreen black-and-white cinematography and Takemitsu Toru’s avant-garde music, Da Vinci’s “Mona Lisa” and Purcell’s Dido, and a great performance by Ikebe Ryo, Shinoda transformed Ishihara’s potboiler into a work of art.