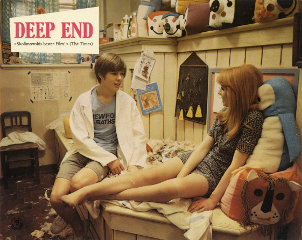 In British poet Philip Larkin’s “Annus Mirabilis” (written in 1967, published in 1974), the cynical, middle-aged speaker simultaneously romanticises and ridicules Britain’s “Swinging Sixties”. While he laments that he is too old to indulge in the free love of the Sexual Revolution, he also mocks the notion that it will provide the youth with any more happiness than traditional marriage. The speaker suggests that free love will be just as awkward and unfulfilling as back in his day when both genders were forced into

A sort of bargaining,
A wrangle for a ring,
A shame that started at sixteen
And spread to everything. (1)

This prophecy was realised on-screen three years later in Deep End. Set in London in the period when the optimism of the “Swinging Sixties” and Harold Wilson’s first term as Prime Minister was dissipating, the film illuminates the darker edges of an era when British youth was typically portrayed “swinging down the street so fancyfree” in such popular films as Georgy Girl (Silvio Narizzano, 1966) and Alfie (Lewis Gilbert, 1966) (2). Instead, Skolimowski’s black comedy, like Larkin’s poem, paints the picture of a British culture suffering from the emptiness of sexual decadence. Deep End begins as an eccentric coming-of-age drama and gradually reveals itself to be a disturbing tale of sexual obsession.

The film stars the baby-faced John Moulder Brown as Mike, a British 15-year-old dropout, who takes a job as the male attendant in a London public bathhouse to help support his parents financially. The bathhouse is frequented by lustful teenagers, repressed housewives, and sexual degenerates, and Mike is introduced to the sordid underbelly of the business by Susan (Jane Asher), the beautiful redheaded female attendant. Susan persuades Mike to exchange his male patrons for her female ones, so they can both earn bigger tips by helping the customers indulge in their sexual fantasies. “You don’t have to do anything for it”, Susan says nonchalantly. “Just go along with the gag. That’s all they want.” Mike learns this firsthand when a middle-aged female customer (Diana Dors, playing off her then-image as a blonde sexpot past her prime) massages her large breasts with his head (against his will) as she fantasies about Manchester United’s George Best scoring six goals against Northampton in the F.A. Cup. “Tackle, dribble, dribble, shoot”, she screams as she reaches climax. This wrestling scene with Dors, who Andrew Sarris cites as “a frightening reminder of what Marilyn Monroe might look like if she were alive today” (3), is played for laughs, but it also suggests Mike’s fear of sexually assertive women, which becomes increasingly evident.

Infatuated with Susan, whose sexual liberation equals his sexual repression, Mike begins stalking her so he can interfere with her sexual trysts and express his affection. Played with cynical precision by “Swinging Sixties” icon Asher – the former girlfriend of Paul McCartney – Susan is a working-class variation of Diana Scott (Julie Christie) in Darling (John Schlesinger, 1965). She plays with the affections of multiple male suitors and uses sex as her bargaining chip. In addition to her playboy fiancé, Chris (Christopher Sandford), Susan is also seeing a married swimming instructor (Karl Michael Vogler), who flirts lecherously with young girls at the bathhouse. Even though she is determined to “wrangle for a ring” to move up the social ladder, Susan sees nothing wrong with sleeping with other men on the side. Her unabashed promiscuity disturbs Mike. After stealing a cardboard cut-out of a stripper resembling her outside a Soho strip club, Mike follows Susan on the subway and confronts her with his discovery. He demands to know if she is the nude woman in the image. “It cannot be you… because you’re not like that”, Mike insists. “What am I supposed to be like?”, Susan retorts. Her defiant tone illustrates that she sees herself as a modern liberated woman, who refuses to allow men to control her. However, strangely, Susan is Mike’s kindred spirit. Like him, she is essentially lonely and does not always appear completely at ease, or satisfied, with the new gender roles that the Sexual Revolution has thrust upon her.

In his 1981 discussion of Deep End, Danny Peary remarks that Mike’s growing sexual obsession with Susan “becomes as difficult to watch as James Stewart in Vertigo” (4). Peary’s comparison of Deep End and Vertigo (Alfred Hitchcock, 1958) is apt, because there are similar moments in each film where Skolimowski and Hitchcock express their male protagonists’ regressive attitudes towards women through visual style. Skolimowski invokes Hitchcock’s narrative and stylistic techniques by limiting our point-of-view almost exclusively to Mike, thus implicating us as Mike begins to go off the “deep end”. Following Mike’s night of stalking Susan and Chris in Soho (culminating in the outburst on the subway), we begin reconsidering our identification with him. Robin Wood’s discussion of our renegotiation of identification with Stewart’s Scottie in Vertigo could be applied easily to Mike in Deep End. “Identification is not so much annihilated as severely disturbed, made problematic”, Wood argues. “We now know far more than he does, and what we know reflects critically on him, on our own prior identification with him, and on the whole concept of romantic love on which our culture has placed such high ideological value.” (5) We are disturbed by Scottie and Mike’s unhealthy desire to possess an idealised (entirely male-constructed) woman. Each character possesses little understanding or concern for female sexual desire.

In addition, both Skolimowski and Hitchcock suggest their protagonist’s heightened passions through expressionistic water imagery. Echoing the melodramatic waves crashing in back of Scottie and Madeleine/Judy (Kim Novak) in Vertigo, Mike’s desire for Susan in Deep End is expressed in an offbeat fantasy sequence lasting slightly over half a minute. After returning from his argument with Susan on the subway, Mike throws the cut-out into the water of the bathhouse’s swimming pool. As Mike jumps into the water, Skolimowski and editor Barrie Vince utilise a jump cut to make it appear that Mike has shed his clothes spontaneously. This sequence becomes even more hallucinatory through Skolimowski’s use of slow motion as Mike caresses the cut-out under the water. Suddenly, the cut-out morphs into the real-life Susan, which suggests Mike’s increasing inability to distinguish fantasy from reality (6).

Deep End was made during the period after Skolimowski ran afoul of the Polish government with his anti-Stalinist allegory Rece do góry/Hands Up! (filmed in 1967, but completed and released in 1981) (7). Following in the footsteps of his former collaborator Roman Polanski, who directed his screenplay for Nóz w wodzie/Knife in the Water (1962), Skolimowski left Poland and relocated to England seeking greater artistic and commercial possibilities. However, unlike Polanski who scored a success immediately with Repulsion (1965), Skolimowski watched his career flounder with a series of box office failures, including The Adventures of Gerard (1970), Deep End, and King, Queen, Knave (1972). As evident from Paramount’s lurid promotional poster for Deep End – showing blood dripping on Mike from Susan’s disembodied head – the studio had no idea how to market the film and, after it faired poorly both commercially and critically (8), the film began popping up on the bottom half of double bills with such disparate youth films as Romeo and Juliet (Franco Zeffirelli, 1968) and Friends (Lewis Gilbert, 1971) (9). Unfortunately, Deep End’s unavailability – except in poor quality bootlegs with washed-out color – has prevented the film from receiving the re-evaluation it richly deserves.