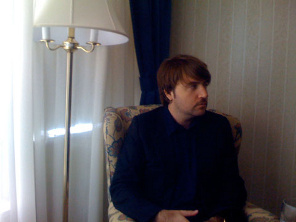 Like Hamlet’s two doomed friends in Tom Stoppard’s Rosencrantz and Guildenstern are Dead, the Three Kings who wander through Albert Serra’s El Cant dels ocells (Birdsong, 2008) are tangled in an existential snarl. Were one of the Wise Men to wander too far away from his companions, one suspects they would all suddenly lose their essential Three Wise Men-ness and vanish in a cloud of smoke. They inhabit, as Serra describes it, an absurd “land of nowhere”, a fleeting moment of historical time and space in which Christianity is relatively free of ideology and meaning, and among Serra’s many remarkable accomplishments in the film is his discovery of a cinematographic analogy for that moment. In an era when the long take has become a hallmark of world art cinema, Serra tests the limits of each composition. The Wise Men are, at one moment, bumbling sojourners on a fool’s errand and, at the next, genuine icons of faith and devotion. Serra’s camera stands at a distance, watching it all with an amused but reverent curiosity. His images are simple and lovely – filmed reflections of one King’s observation early in the film: “At times we’re awestruck by the beauty of things.”

I grew up in a very pious Christian home, and it occurred to me while watching your film that I really only know the story of the kings through a few iconic images.

These are truly iconic images.

I assume that is something that interested you? Since so little is known about the wise men, you have great freedom to interpret them however you like.

What interested me was to mix into the film different atmospheres. So, in the film there is humour but at the same time there is a seriousness. There are some classical, iconic religious images, especially in the shots of the Virgin Mary (Montse Triola) and Joseph (Mark Peranson), which I took quite seriously, but at the same time there are also profane shots. The risk of the film, what I love about it, is the mixture of these two atmospheres. 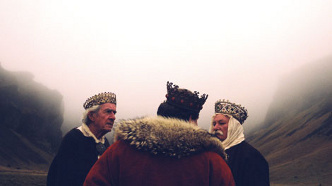 We are talking about three men. (1) Christianity has not been born yet. All of the ideology, what Jesus means, we added later. We’re talking about the pioneers. Just three men who probably feel stupid, you know? They don’t know why they are going to see this child, or where they’re going, or how long it will take. They’re following a star to find a small child in order to adore him. There is something absurd here, something profane, because Christianity doesn’t yet exist.

But, at the same time, it’s the beginning of everything. At this moment, Christianity is being born but it hasn’t yet grown up. We’re in this land of nowhere. It’s an absurd situation because they don’t know Christianity will become this big thing, but at the same time they know they are looking for something very important.

You keep using the word “absurd”. My first note, midway through the opening shot, was “Beckett”.

Yes, of course. Absurdity in cinema today is something provocative. We are used to seeing narrative films where every shot is related to the shot before and to the shot we will see next. My taste for films is nearer to the way you read a poem. When you read a poem, you don’t expect every verse to have an obvious meaning. Perhaps it’s only a suggestion. Perhaps it’s only there because a word has a particular sonority or creates a particular image or atmosphere. You don’t expect each line to be perfectly comprehendible.

My film, like a poem, has freedom inside of it, but at the same time it’s very calculated. Each shot is carefully worked by the author, but always with some freedom inside it. It’s like a koan – one image colliding with another.

I shot 110 hours and edited it myself. You have to be very sensitive to edit all of this material. The film was clear. It took me two months to build the structure of the film and then I edited for another four months, but I only cut one image! The work of this four months was editing the length of each shot.

This is important. I am one of the only filmmakers today who works on the set without a monitor. I use digital technology but in an old school way. Like [Luis] Buñuel or [Carl Th.] Dreyer or [Yasujiro] Ozu or [Pier Paolo] Pasolini, I never saw one image of the film before I finished shooting. The old masters never saw footage until it had been developed at the lab. I discover the film later, when there is nothing else to do.

There seems to be a whole class of filmmakers today who trust long takes to reveal mysteries about their characters.

It’s easy to shoot someone’s face, I think. One of the points of Birdsong is trying to find some magic in images shot from very far. It’s more difficult to keep the power of the film without first shooting close-ups. In my earlier films, there are a lot of close shots of faces, and I thought, “Well, let’s try changing things a bit, because perhaps it’s too easy.” A face is always interesting. The viewer is trying to discover, “What is this character thinking?” But put him further away and it’s much more difficult to keep that magic.

I wanted to ask you about one really long shot, where the three men are walking off toward the horizon. Did you adjust the camera at all in that shot or is it just the naturally changing light?

No. The magic of this shot … When I began editing I was scared that people would get bored watching this shot, but what I’ve discovered is nobody gets bored. [Laughs.] Nobody. Nobody! Even the most primitive, stupid spectator keeps looking and keeps wondering, “What’s happening?” And it’s ten minutes. No, eleven. Eleven minutes! 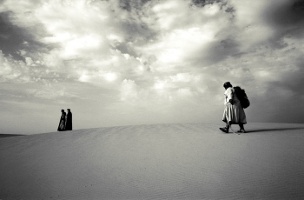 So, I sent them off walking across the desert with the walkie-talkie. And there they go. Walking. Walking. And then I started speaking jumbled words. And I could tell they were saying to each other [whispers], “Mother? Wall? Tree? What is this? The walkie-talkie must not be working.”

I’m saying something that’s completely unrelated, you know? But they have to react. Each reacts in his own way. And, five or ten seconds later, I say, “Please! A mother! Tree! Sky!” And they all stop and think, “Tree? Sky?” But they stop and look off at the sky.

So, in this shot, I got the right percentage of real freedom – because they really don’t know what to do – but at the same time there is some kind of necessity because you feel that they are following something. They are following my absurd instructions. They didn’t understand what I was saying, but there is something imperative in their walk.

I used this technique many times in the film. It’s very beautiful. I used it with Mark Peranson’s scenes. He speaks Hebrew, right? The Virgin Mary speaks Catalan. They do not understand each other. I didn’t worry about translating, but, when you read the subtitles, they’re okay, like intuition. Again, the actors have a level of freedom, because they really do not understand exactly what the other is saying, but at the same time they are bound by necessity. They are performing the roles of Mary and Joseph, so they can’t do exactly what they want.

This is all related to the first point of our discussion – this mixing of a serious and religious side with a more profane and free side.

When we finally see the pieta, you shoot it from above and behind Mary.

Yes. We got that in one shot. I wanted to make a simple film, like paintings from the Middle Ages. It’s not narrative. It’s one image … stop … another image. It’s like if you were in a church and saw Middle Age paintings side by side. Very simple.

One of the other iconic images is of them spotting the star. You stage it so that they strike a pose, pause, reposition themselves, strike another pose, pause and so on.

That shot is very humoristic, but also serious. And you never really know what to think of the atmosphere of any single moment.

I’ve heard you describe Birdsong as one of the first truly religious films in many years. 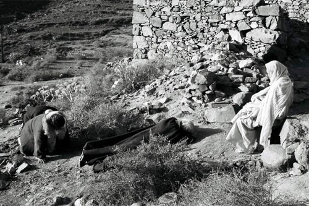 In what tradition of religious films would you like to see your film included?

What distinguishes their films from others? What makes them truly religious?

Well, they are not “truly religious” films, no? Great art, I think, always has ambiguity and a richness that allows viewers to apply many points of view. Pasolini was a Communist and he made religious films. Rossellini was engaged politically but made The Flowers of St Francis [Francesco, giullare di Dio, 1956].

I thought of St Francis many times while watching Birdsong.

It has the best ending in film history. Do you remember? When they have to decide where to go, all of disciples, to spread the word of St. Francis? Do you remember? [Serra stands up and begins walking in a small circle, re-enacting the scene.] They start doing this, until they fall. And when one falls, that is the direction they must go. Do you remember? I think that is the best ending in all of film history. It has that beautiful ambiguity. It’s serious – they really do want to go and spread the word of Christ – but the moment is also poetic and humorous.

There’s one especially poignant line in Birdsong. One of the wise men picks up a stone and says, “At times, we’re awestruck by the beauty of things.” I love that word “things”. It’s a material beauty.

We are talking about three wise men, who were supposed to be magicians or men of great intelligence, but it’s the simple things. In St Francis, there is the scene where one man is accidentally burned and begins to complain and curse, and another man says, “Oh, do not bother Brother Fire.” This kind of purity and innocence is magic, and it’s what I wanted to create in the atmosphere of my film.