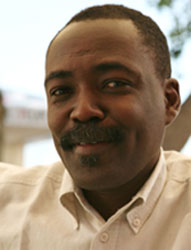 Mahamet Saleh Haroun was born in Chad in 1963. He studied film at the Conservatoire Libre du Cinéma in Paris and journalism at Bordeaux I.U.T. (Technical Institute). He worked for several years in the press and radio before directing his first film, Maral Tanie (The Second Wife, 1994). An internationally acclaimed representative of the contemporary generation in African cinema, he was able to make films thanks to the support of older colleague filmmakers. Bye Bye Africa (1999) received a jury mention at the Venice Film Festival in 1999. Abouna (Our Father, 2002) has been screened at Cannes and New Directors/New Films in New York. Invited by the Flaherty International Film Seminar (1) during the Summer of 2007, Haroun’s Darratt (Dry Season, 2006) – for which he also wrote the screenplay – confirmed his restraint in telling stories. Thus, after a series of award-winning short films ranging from thriller to comedy, from fiction to documentary, Haroun’s personal style has become clearer and stronger, in that he allows daily life and psychological situations to come through the lens. Especially in Abouna and in Darratt, the director explores feelings of loss and anger, of recovery and revenge thanks to the mute eloquence of objects, an intuitive sense of rhythm in the editing and extended long shots of his characters in the African landscape.

I met with Mahamet-Saheh Haroun in New York City during Museum of Modern Art’s (MOMA) re-screening of films from the Flaherty Seminar.

DALLE VACCHE: During your visit in New York, you mentioned that your vocation as a filmmaker began when you were an 8-year-old child and saw the beautiful close-up of a woman’s face during a Bollywood film in Chad. You said that this was only the beginning of a much longer discovery of what you wanted to do with your life. Would you tell us just a bit more about the emotional and intellectual itinerary of this vocation?

HAROUN: After this Bollywood film, I kept thinking about the actress’ smile. Later on, I started playing with my friends by inventing new games. But my friends did not seem to care about my fictional experiments. So I began to feel isolated. The more I spent time by myself, the more I observed life and people around me. Eventually, I became a loner and I started imagining one story after another. My favourite refuge was a Lebanese theatre managed by a Lebanese man. I used to go there every evening and the programming included Bollywood, Westerns, kung fu films from Hong Kong. By the time I became a teenager, I decided to study cinema, so I moved to Paris to learn everything about filmmaking.

Your films are full of fascinating references to other films by European, Asian, and African directors. In previous interviews, you mentioned the names of Abbas Kiarostami, Takeshi Kitano, and Hou Hsiao-hsien. Can you give a few concrete examples about the ways in which these colleagues’ works sustain and influence your own very personal filmmaking style?

Abbas Kiarostami’s Close Up [Nema-ye Nazdik, 1990] had a very strong impact on me. It was so powerful that I spent all day thinking about this story, but I also felt distressed. I love Kitano for his elliptic way of telling stories and his sense of the burlesque. Hou is one of my favourite directors, because of his sense of tempo, the rhythm he gives to his stories and his deep melancholia.

In Bye Bye Africa, you take your viewer on a fascinating tour of old abandoned movie theatres in the capital of Chad. What happened to bring about the demise of these places?

Movie theatres have been destroyed because of civil war that started in the capital of Chad, N’djamena, in 1979. And, since then, there is no exhibition infrastructure in the country. All we have is something we call video-club. There, we can watch pirated Hollywood and Bollywood films. I also premiere my new films there, on DVDs. 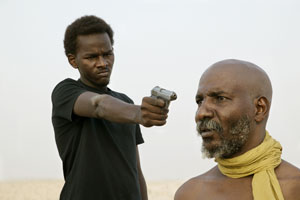 As you explained at MOMA, you love Charlie Chaplin and silent film, hence dialogue is reduced to a minimum in your films and objects loom large. In Darratt, the bread loafs are charged with great intensity and fly into the screen from the off-screen. Would you comment on these moments? What or who is the off-screen about and why?

Yes, I do love silent movies. For me, the first and most important rule is to tell a story in a visual way. Dialogue must be used only when you cannot express what you need by images. In Darratt, the bread thrown by the beggars, who are off-screen, flies back into the frame. Even beggars do not like bread made by an evil person. Breadmaking is feeding, a symbol of generosity and charity. Everybody knows that Jesus distributes bread to the poor and this is why the baker in Darratt, after his violent past, tries to find redemption.

Why, besides Chaplin, did you quote Yaaba (1989) by Idrissa Ouedraogo in your film Abouna?

Because I love Yaaba. It is one of the best African films ever made about childhood. It looks like a film made under Chaplin’s influence. We all belong to Chaplin.

Abderrahmane Sissako was your producer for Abouna. Who has produced Darratt and how are you going about the production of your next film? What will it be about? Do you already have a title?

Darratt, too, was produced by Sissako. I have already written the script for my next film. The title will be A Screaming Man Is Not A Dancing Bear. I hope I will shoot it in 2008 in Chad, with professional actors. It is a story of a sixty-year-old man who is fired from his job and his son takes his place.

What do you think of the overall situation of African cinema? It appears that the French government is putting in less money into West African film culture. It seems that South Africa wants to be the new African Hollywood, and Nollywood, just like the country itself – Nigeria appears to be totally out of control. How do you feel about the way things are going in your continent?

I used to say that, as an African filmmaker, I can compare myself to a child of the streets. I try to get money from any source that enables me to make my films. 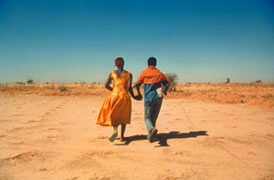 Contemporary African artists are very much in demand. The Venice Biennale included many of them. Do you think that this renaissance and international demand for African visual artists will also help the cinema?

I do not think so. Only our talent will help us. No one can create in our place. We have to account for ourselves.

You have been at FESPACO (Panafrican Film and Television Festival of Ouagadougou) many times. What would you like see happen in the future of this institution?

To evolve in the right sense, FESPACO must be a free association, including other African filmmakers, but not only people from Burkina Faso.

Are you familiar with the Imagine Film-Making School headed by Gaston Kabore in Ouagadougou?

During your MOMA visit, I heard you say that, during the filming of Darratt, you had to interrupt the production for a while, because of the fighting nearby on 13 April 2006. Would you explain what was going on and why? And would you comment on the situation in Darfur?

During the shooting of Darratt, some rebels attacked the capital. We had to interrupt for one day. And then I decided to continue, an act of resistance against barbarism.
What happens in Darfur is terrifying. I hope that the international community will stop soon this shocking barbarism.

In Abouna, one boy provokes or accelerates the death of another, but it never becomes clear exactly why. In Darratt, the ending is a bit of an intriguing surprise. You do not follow a strict causal chain in your narratives. Especially in Darratt, it is hard to decide where the centre of the film is, in terms of the conclusion. Would you agree with this?

No, I don’t agree. This way of thinking about narrative applies to Hollywood cinema. I do not follow that model of storytelling. I enjoy trying new approaches and taking risks.

At the centre of the film in Abouna is the contemplation of a poster of the sea that comes to life and the waves begin to move – the cinema itself. What is the status of images in daily life for you? Are images still comparable to religious icons or are they secular forms of memory? Is the cinema about dream and illusion for you, or is it also about something else that is not just deception or fantasy?

For me, the cinema is primarily about your vision of life, your own philosophy. Of course, the cinema combines memory and history. And, of course, for me images are definitely comparable to religious icons. But, in today’s life, images are everywhere and they have become banal. It is a troublesome situation.

One of the films from Mali at FESPACO 2006 was Faro by Salif Traorè. The narrative was based on animism because the water turmoil, the protagonist’s psychological upheaval and the community’s issues were all on the same horizontal axis. You do not work like this. In fact, at MOMA, you told me you work vertically, because at the end of Abouna and Darratt there is some “grace”. That is a word that usually refers to the cinema of Robert Bresson and Eric Rohmer. What do you mean by “grace”?

I love Bresson: he understood everything about the cinema. I like his bare, strained style, his elegance. Pickpocket [1959] is a lesson of cinema. Grace is something that you can’t explain. It comes, it happens. It is a divine gift, it comes from the sky, it could happen to every exacting artist.

What does oral story-telling mean to you besides non-linear narrative? 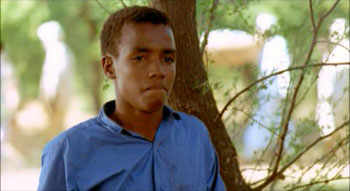 You can do well tragedy, melodrama and comedy. Actually, all these registers seem to slide one out of the other for you. Is this the case?

Yes, that is right. In real life, all these levels are mixed, so…
By the way, I have just finished a TV drama for Arte, a French television channel. The title is Sex, Gombo, and Salted Butter. It is a comedy.

Would you say that these flexibility of registers is also at the heart of Abderrahmane Sissako’s Bamako (2006)? Is Sissako a sort of mentor for you?

Sissako is not a mentor. He is a good friend, that is all. About Bamako, ask Sissako.

In Guelwaar (1992), Ousmane Sembene spells out that Africans have to take their future into their own hands and help themselves in constructive ways without always relying on foreign aid. Do you agree with this position?

It is a little bit extreme. Of course, we can help ourselves, but I think that we all belong to the same world, and generosity, solidarity among us, is not a bad thing.

You are clearly sensitive to a strong African intellectual tradition that includes Leopold Seghar Senghor, Aime Cesaire, Kwame Nkrumah and others. The voice-over in Letter from New York (2001) recites a poem about New York by Senghor, but many of these figures have radically different positions about African issues. So, who are your philosophical mentors as far as your cinema?

You mentioned at MOMA that your grandfather was in a platoon of Chadian soldiers who nearly liberated Paris from the Nazi. Yet they were kept outside the city for racial reasons, so that an entirely French platoon got this honour. Was this a sheer coincidence or were you thinking of a recent film – Indigènes (Days of Glory, Rachid Bouchareb, 2006) – about Moroccan soldiers not getting their pension from the French government?

No, things did not unfold as you indicate. At least as far as my grandfather was concerned, it was absolutely a sheer coincidence.