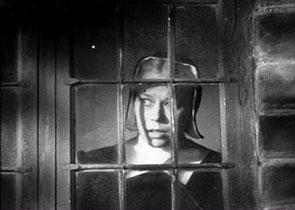 Day of Wrath, Carl Theodor Dreyer’s first feature film in over ten years (after Vampyr, 1932), is a passionate yet restrained story of sin and guilt, and much of its power lies in its reserved approach. Set in 17th century Denmark, the story begins with an old woman named Herlofs Marthe (Anne Svierkier), who is accused of being a witch by her fellow villagers and the religious authorities. Forced to flee from her home, Herlofs Marthe seeks refuge in the house of Anne (Lisbeth Movin), wife of local village pastor Absalon (Thorkild Roose). Anne agrees to hide Herlofs Marthe because the elderly woman claims that Absalon saved Anne’s mother, who was labelled as a witch, from being put to death. But the villagers soon find Herlofs Marthe, and she is swiftly tried by the authorities (or more accurately, she is tortured until she confesses) and then thrown onto a burning pyre (a shocking scene that shows no explicit violence, but whose impact lies in its very matter-of-fact presentation).

All of this happens on the day that Martin (Preben Lerdorff-Rye), Absalon’s son from his first wife, comes to stay at the family home. Martin meets Anne for the first time and she visibly perks up in his presence. The arrival of Martin lifts Anne’s spirits and she quickly grows to like him, particularly as he is closer to her in age and seems similarly romantically inclined. However, Anne is under the constant, suspicious gaze of Absalon’s mother, Merete (Sigrid Neiiendam), who distrusts and resents her daughter-in-law. Anne gradually falls in love with Martin and he appears to return her affection, but what seems like a blissful ideal will eventually, and perhaps inevitably, turn to tragedy, as fear and suspicion take hold, tearing the family apart.

In Day of Wrath, Dreyer shows how a family and a community governed by strict religious doctrine can be so easily swayed by superstitious beliefs and come to believe so intently and so readily in witches. As Anne’s relationship with Martin develops and their attachment grows, Anne starts to behave inappropriately and openly flirts with him in the home. The natural reason for this behaviour is that Anne feels the need for a relationship with someone closer in age and similar in temperament. However, this is overlooked in favour of superstition, with people coming to believe that Anne has used the devilish powers of witchcraft for own selfish ends. All the characters may ultimately come to believe that witchcraft governs Anne’s behaviour (including Anne herself), but this is because the authorities have drummed the belief in witchcraft and its apparent evil power into everyone.

The film is full of contrasts that reflect both character and theme. For instance, while the tranquil daytime scenes with Anne and Martin seem to offer an escape (or more accurately, a brief respite) from the oppressive atmosphere of the community, the interiors are often gloomy and oppressive, with bright shafts of light and dark shadows (enhanced by the black-and-white cinematography) seemingly ever-present. And although there are moments of calm and peace in the film, there is always a sense of impending doom hanging in the air. The spectre of death seems to reach into even these idyllic exteriors, as when Anne and Martin see a horse and cart pass them by, with the tree branches in the cart being taken to the pyre that Herlofs Marthe will later be hurled into. And later, as Absalon journeys home across some fields, he claims to feel the presence of death.

While Day of Wrath depicts a male-dominated society that is overseen by a religious hierarchy of men, Dreyer’s focus is predominantly on the three main female characters. Anne is presented as a woman who is married to a man that seems incompatible with her as a partner, despite Absalon’s good intentions and genuine affection for her. The film shows how Anne lights up when Martin suddenly appears in her life because he seems to be a more suitable partner for her. Merete is depicted as a jealous, possessive woman in the vein of the domineering Hitchcockian mother, a woman who cares deeply about her son, and can’t bear the fact that he has chosen to be with Anne. But while Merete initially seems to be cold-hearted, her suspicions about Anne prove to be well-founded: the younger woman does betray her husband’s trust by falling in love with Martin and pursuing him, and then becomes cruelly dismissive of Absalon. Arguably Merete could be seen as the most honest and principled character in the film: it’s the rest of her family who harbour guilty secrets.

And finally, there’s Herlofs Marthe, a moving and defiant character who, despite being on screen for a relatively brief period at the start of the film, lingers in the memory throughout the drama. She is introduced in a memorable sustained shot that opens the film, which begins by showing Herlofs Marthe at home giving a woman some herbs. The shot then introduces the distant toll of a bell and some indistinct voices yelling off-screen, and culminates with the old woman rushing from her home as she realises that the voices belong to people hunting for a witch, and that the witch is her. The opening is ambiguous (it is never established exactly what sort of herbs Herlofs Marthe gives the woman, or if they do possess any miraculous power) and we are never given any strong evidence as to why Herlofs Marthe is being persecuted as a witch (her remedies and beliefs may go against the values of the Church in her community, but what we see of her behaviour before she is captured does not appear to be destructive or harmful). She is not portrayed as a malevolent character, and our sympathies are undoubtedly with her as she is tortured and then later killed.

Once Herlofs Marthe is gone, the focus mainly falls on Anne, who becomes intrigued by the tales of her mother’s apparent powers of witchcraft, particularly her ability to wish people dead at will. Because the authorities encourage the belief in the existence of witchcraft – but not its practice – Anne comes to believe that she has inherited her mother’s power. At the end, as with Herlofs Marthe’s abilities, the question of whether Anne has the power of witchcraft, or if she has just convinced herself that she has, is left open. But whether or not witchcraft actually exists in the world of this film is not the issue. What Dreyer is criticising is the Church’s relentless persecution and murder of Herlofs Marthe, and the subsequent pressure that its strict rules exert over Anne. These two women seem to be punished more for their independent thoughts and free-spirited attitude to life rather than any obviously abnormal behaviour on their part. While Anne’s romantic pursuit of Martin and callous treatment of Absalon is improper, these actions are no reason to condemn the poor woman to her eventual fate. In fact, Anne seems to have been so heavily influenced by the beliefs of the people around her that she ends up condemning herself.

Even though the behaviour of the religious authorities of the time is criticised, Dreyer finds humanity in the characters that represent the Church. Just as the director doesn’t demonise Merete (despite her seemingly cruel behaviour towards Anne), and although Absalon and the Church authorities preside over the witch-hunt of Herlofs Marthe, we also see that Absalon cares for Anne and comforts his dying colleague Laurentius (Olaf Ussing), showing a humane and tender side to Absalon’s character. Absalon is shown to be a moral man who feels guilty about his marriage to Anne and is troubled over letting Anne’s mother go free. Ultimately, it’s the rules and practices of the authorities and institutions at the time that are shown to be at fault. We see how these organisations use their power and influence to crush an individual’s spirit, foster superstitious beliefs, and create fear and confusion among the people they purport to protect and enlighten (1).