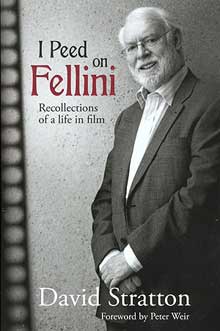 Every film lover in Australia owes David Stratton an enormous debt of gratitude. He was largely responsible for the growth and success of the Sydney Film Festival, which he directed for 17 years; he did almost as much for the Melbourne Film Festival, which then relied on the same imported prints. All along, he fought valiantly against our local censors, who finally agreed to leave festival screenings alone, though admission was, at that time, restricted to “members” buying tickets on a subscription basis. Personally speaking, he and Margaret Pomeranz were probably the first film critics I encountered in any medium, giving their yin-and-yang assessments of current releases on what must have been some of the earliest episodes of SBS television’s The Movie Show. Later, when I was in my teens, his weekly Cinema Classics program introduced me to films like Genroku Chûshingura (The Loyal 47 Ronin, Kenji Mizoguchi, 1941-2), Goto, l’île d’amour (Goto, Island of Love, Walerian Borowczyk, 1968), and Vale Abraão (Abraham’s Valley, Manoel de Oliveira, 1993) – this in the days before DVDs and BitTorrent trackers, when my odds of locating such titles unaided were slim to none.

For me back then, Stratton was nothing more or less than the face of authority, with his trademark beard and glasses and his air of sober assurance in laying down the law about the cinema of every time and place. It’s a surprise to learn from this memoir that he never attended university, and only in late middle age found his calling as a teacher; it took him almost as long to gain confidence as a critic, though when he finally accepted a job as a Variety correspondent, he never looked back. He is hardly a scintillating writer, but I Peed on Fellini has the virtues of his newspaper prose, including honesty, attention to detail and an open mind. Beyond that, the book holds automatic interest as a quirky self-portrait by one of Australia’s best-known film commentators, appearing, for once, with his pants down (so to speak).

The literal meaning of the title is explained in the preface: on his first trip to Venice, a nervous and intoxicated Stratton found himself standing at a hotel urinal next to his idol Federico Fellini, and in the midst of his excitement, nature took its course. But the real significance of the story only emerges later on, when Stratton cites a much older memory of urinating in his pants during a screening of The Princess and the Pirate (David Butler, 1944), the first live-action film he was ever taken to see. In this strange fashion, his lifelong love of cinema is linked from the outset with scandal and self-display, an impression corroborated in other passages: most strikingly, we learn that, as a toddler, he fantasised about filming every waking moment of his life, using his mother’s make-up mirror as a camera. This book, in a sense, fulfils that dream, with memories tumbling willy-nilly onto the page. He notes that the numberplate of his first car was MGK 333 and that his mother’s friend’s father helped design the London Underground system, but he leaves it to the reader to determine if these facts hold any significance whatsoever.

It’s clear, at any rate, that movies supplied Stratton with all the glamour which his family background signally lacked. Born in Wiltshire, a week after Britain’s declaration of war on Germany, he’s the descendent of several generations of Methodist grocers, surrounded by “a world of bacon, cheese, tea and coffee” (p.6). While his father is away at the war, his mother occupies herself with volunteer work for the Red Cross, leaving him in the care of his grandparents until he reaches the age of nine and is packed off to boarding school. Through it all, movie-going remains a burning obsession: the images on posters, and even the titles themselves, are “more tempting than any forbidden fruit” (p.28). Soon he is making notes on every film he attends, and filing away the cinema adverts he clips out of the newspaper with the same avidity he will eventually show as a collector of DVDs.

In their haphazard organisation and faintly pompous tone, these early chapters feel rather like extracts from a modern British novel by, say, Michael Frayn or Ian McEwan, in which a naïve, outwardly staid narrator is faced with repeated, baffling glimpses of the underside of life. The atmosphere of Stratton’s childhood is defined by the war and its aftermath, a period when spies potentially lurked around every corner; back home for the summer holidays, he discovers a USSR flag in the family garage, and wonders if his parents might be secret Communists. His lifelong “fondness for conspiracy theories” is encouraged by his viewing of a forgotten thriller called The Window (Ted Tetzlaff, 1949) about a boy who witnesses a murder (p.41); still more haunting is a scene from an unidentifiable trailer in which a little girl exclaims “The man next door hasn’t got a head!” (p.18).

He is curious about other kinds of mysteries, too. Tantalising hints about sex are dropped by his father or his friends; when a gay teacher is fired from his school and subsequently commits suicide, he has to find out the real story from the local press. Naturally, the movies have their role to play in this side of his education; Gentlemen Prefer Blondes (Howard Hawks, 1953), with the “delectable” Marilyn Monroe (p.48), comes as a particular eye-opener. But after leaving school at 16, Stratton has small success as an apprentice grocer, and this part of the book ends with a scathing assessment of the socially clumsy, blindly Tory and “probably quite boring” 22-year-old who, in 1963, embarked for Australia with his schoolteacher bride, on what was intended to be a two-year visit: “I had no head for the practicalities of life; I wasn’t artistic, I couldn’t draw or make things, or repair anything…” (pp.72-73).

This is the man who, just a few years later, as a young film festival director, would find himself jetting around the world on a regular basis and rubbing shoulders with just about every cinematic luminary of the day. Back then, as he reminds us, festival schedules were far less hectic than they are now, leaving him ample time to bask in a hothouse atmosphere halfway between La Dolce Vita (Fellini, 1960) and Celebrity Big Brother. Nobody could blame him for being starstruck, even if some of the encounters he records are brief and unexciting. Orson Welles is a fellow guest in a hotel in San Sebastian, but “wasn’t very communicative” (p.220). Andy Warhol is equally distant (“perhaps he was stoned” [p.250]). Other vignettes are more memorable: Myrna Loy smoking a joint at a party in Los Angeles, Jimmy Stewart presenting an award to a leather-clad Rainer Werner Fassbinder, Joseph von Sternberg advising the technicians at a Sydney TV studio on where to position their lights. There’s the elderly Joan Fontaine, who arrives for her stint on a festival jury armed with a stopwatch, an unflattering photo of her sister, Olivia de Havilland, and a copy of How to Run Meetings; and there’s Harriet Andersson, who sits naked next to Stratton in a sauna, whereupon, he winningly explains, “I had great difficulty to keep from demonstrating the extent of my lust in what would have been a wholly inappropriate way” (p.211).

Stratton’s trips to Eastern Europe are particularly significant, not only widening his political horizons but giving him further opportunities to look out for possible conspiracies. In the mid 1970s, he conducts a brief affair with a Hungarian receptionist; when her interest wanes, he starts to suspect her of being a government spy. But what could the Hungarians want from him? He never learns the answer, and “Elizabeth” disappears after a couple of pages. A few years later, he’s perhaps not wholly displeased to learn that his travels have long been monitored by an Australian security organisation, and that he aroused particular suspicion by attending a function at the Polish Consulate in a red tie. Truth proves, after all, to be stranger than fiction.

Perhaps strangest of all is the moment when he runs into Laura Mulvey and Peter Wollen, the 1970s rock stars of Anglo-American film theory, who are researching a monograph on Raoul Walsh; he offers to lend them his own taped interview with the director, but they lose interest when told it contains no mention of a castration complex. Stratton is not the man to go to war over a theoretical issue, and the last few decades of debate about the methods and purposes of criticism largely seem to have passed him by. His own causes are more practical, yet closely tied to private emotion: it is hard to miss the continuity between his committed anti-censorship stance and his childhood attachment to films as points of access to a magical, potentially illicit world. There is something chivalrous about his attitude, as if he were defending his loved ones against a physical threat; as he reminds us, a “cut” print is irreparably damaged, even after the offending frames are restored. His protests against his adopted country’s treatment of asylum seekers are personal in a related way: nothing less would be expected from a decent man who himself arrived here as an immigrant, who cherishes friends from many cultures, and who routinely uses words like “cosmopolitan” and “sophisticated” as terms of high praise. The passages devoted to the decline and fall of the SBS television network, once a symbol of multiculturalism at its finest, are likewise among the most bitter in a very genial book.

Stratton’s commitment to self-disclosure has its limits: he says little about his two marriages, and even less about the children and grandchildren to whom I Peed on Fellini is dedicated. At some point, two images of the author crystallise, which can never quite be reconciled: the modest, kindly man who smiles shyly from the cover, and the tireless monomaniac who, throughout his career, seems to have done more or less as he pleased, overcoming most forms of resistance through sheer staying power. One more story, which does not appear in the book but still says something about its author: Stratton has told at least one interviewer that his original draft was “longer and more personal”, but that on advice from friends, he “stripped out the sex” (1). It is ironic, and somehow telling, that after a lifetime’s devotion to the cause of freedom of speech, he should finally succumb to self-censorship. Perhaps he dreams of marketing a special uncut edition, for subscribers only.

I Peed on Fellini: Recollections of a Life in Film, by David Stratton, William Heinemann, Sydney, 2008.