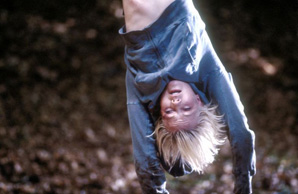 “The Midnight Madness category was originally devised as a spot for films that didn’t really ‘fit in’ with a traditional festival agenda… back in, say, 1988, when genre films didn’t necessarily ‘belong’ at a film festival,” explained programmer Colin Geddes when Cinematical asked him on the importance of a midnight movie program in a festival like Toronto. (1) Although nearly two decades have passed since its launch, there’s much to be said about Toronto’s agenda now: how genre films still aren’t chosen to front its professional image despite the Midnight Madness program’s reputation, which stands like a flaming beacon in the event’s colossal waves of variety.

I’m not sure what the traditional festival agenda was in the ‘80s, but along with commerce, aesthetic pretensions dominate today. Art is defined as much by big league festivals as it is by reviewers complicit in trumping the spectacle of the emotionally staggering five-star masterpiece by one of the most important filmmakers in top form. Since new films touring the circuit are banking on wider distribution, sobering cineaste fare routinely maintains an edge over all else in numbers and popularity. If genre films are incompatible with this popular clique, presumably they’re too kitsch for highbrow tastes. Yet, this dialectic fails to account for a film like Babel (2006). The latest example in the chic circle jerk genre, its design has been sold as a fine dining affair despite its conceit as a sleazy international buffet.

While any picture possessed by a familiar form is begging to be classified, content is second to how festivals specialising in genre fare ultimately decide what their programs will screen. For Toronto’s Midnight Madness however, the alliterative epithet says it all: thrill is the order of the night, for this is an experience that delights in matter out of place. “Madness” doesn’t demand discomfort, but any charismatic programmer would be hard pressed not to appeal to distress. Blood and body parts are welcome but don’t guarantee a good time, for as previous editions have shown, the right side of the brain is best left intact. Although hostile to campy send-ups, the field of play is obliging, and flaunts artists as diverse as Dario Argento, Peter Jackson, Eli Roth, Miike Takeshi, Oshii Mamoru, Prachya Pinkaew, Johnnie To and Tsukamoto Shinya – among many others who dream in restless fantasies.

Of importance too is the program’s empathy for its fans, many of whom have stuck through its adolescence. And since this is a rare space that condones juvenile racket, Midnight Madness films must rock the house. If a film is unlikely to electrify, it might be better off in the Masters section. Toronto’s standard line-up is ten features over ten days, placing it in awe of a festival like Spain’s Sitges, a league member of about two-dozen European venues devoted to international genre cinema, or even relative upstarts such as Puchon’s PiFan and Montreal’s Fantasia. Nevertheless, a genre program in Toronto’s hypermarket is blessing enough for fans. The faithful are like classical music nerds who esteem the town’s annual beach dance party because of the chamber orchestra that never fails to live it up at the remote breakwater. 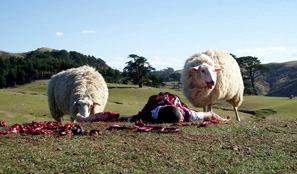 The year’s line-up was a “mixed bag,” according to Geddes. This means there was at least one major stinker, but I’ll save these for later. As expected, the hordes that turned out to receive Black Sheep (Jonathan King, 2006) and Gweomul (The Host, Bong Joon-ho, 2006) were left insatiable, proving that the bar on mutant mayhem had been raised. If there’s one thing that hasn’t been said about South Korea’s aqua-jabberwocky movie, it’s that it has a rival – a peer with a sense of humour. The real black sheep of the New Zealand paddocks is in fact a livestock industrialist who genetically manipulates his sheep. When trespassing activists clumsily let loose a mutated lamb in his herd, a nasty chain of infections from sheep to humans unleashes, coinciding with a visit by power suit investors keen to inspect the genetic handiwork. The ensuring riot is as uproarious as it is unnerving, where it’s up to the industrialist’s younger brother who must subdue his ovinophobia to arrest the mob and stop the scapegoating of more sheep.

Mixing amusement with perversity isn’t easy, but the challenge turned up other inspired attempts. After presenting Creep (2004) two years ago, the UK’s Christopher Smith returned with Severance (2006), a rambunctious groaner that oddly chose to brand itself with a misleading “The Office Meets Deliverance” tag. The UK office of a multinational arms supplier is forced to attend a teambuilding retreat at a company chalet in the Hungarian woods, but no sooner do the seven teamsters discover proof of the company’s unethical past when they get stalked and hunted down like game. Featuring a rich ensemble of white collared misfits, this self-conscious but witty spoof of the slasher numbers game plays up its cast of archetypal opposites with glee, pitting their survival potential against the audience’s expectation of who will remain standing.

Though not pure comedy, Kim Chapiron’s Sheitan (2006) – Persian for “satan” – was at least able to rouse some comical jitters, notably in producer Vincent Cassel’s doubling as a hillbilly who terrorises three Parisian boys after a girl they lust over at a club invites them to her family’s countryside manor. The dwelling is empty, save for Cassel’s caretaker and his pregnant wife, both voodoo doll worshippers by night, who welcome them with the kind of French hospitality that even the Parisians find appalling. The young and hip Chapiron, waving a digicam towards the sprightly crowd while introducing the film on closing night, said that LSD had inspired this debut. I’m sure it did. He added that everyone would enjoy the film if they were on magic mushrooms, but then neglected to hand any out.

In comedy especially, overstatement can be the kiss of death. Cultural differences may allow for great entertainment, but Borat: Cultural Learnings of America for Make Benefit Glorious Nation of Kazakhstan (Larry Charles, 2006), whose red state rampage was strategised from an offensive position, tripped early on and limped for over an hour to the credits. Never as funny as it aspired to be, its stone cold gags froze throughout. Too proud to admit this, they then overcompensated on gross-out antics, which were more tedious to sustain. Kazakhstan protested the caricature. So did those Americans who found themselves bamboozled. Some are said to have called lawyers. They need not have, for the joke was never on them. Only those with a smug desire to see conservatives behave like conservatives could have self-inflicted this punch line on Borat’s behalf.

Among other fallen angels, Jonathan Levine’s teen slasher All the Boys Love Mandy Lane (2006) was rewarded when the mohels at the Weinstein Company picked up distribution rights, surely to have it carved for next Thanksgiving. For now, it could learn a tip on subversion from Scott Glosserman’s Behind the Mask: The Rise of Leslie Vernon (2006), a smarter work that was regrettably absent. The other washout was the soft porn anthology Trapped Ashes (2006), involving the directing talents of Sean Cunningham, Joe Dante, John Gaeta, Monte Hellman and Ken Russell in a flaccid tale of several visitors trapped in movie studio’s haunted house, who must disclose their most frightening anecdotes to escape. Dante helms the master narrative stringing the flashbacks, each directed by the remaining quartet. Despite the cult celebrity, no amount of head scratching could relieve its prickles of inconsistency, but for Russell’s titular entry, “The Girl with Golden Breasts”, which lampooned a dilettante actress who undergoes a revolutionary boob job using cadaver tissue as transplants, only to see their biological function reversed in a most alarming way. 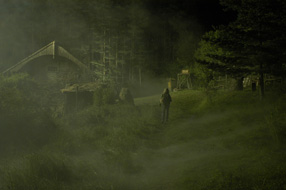 For fans of the real haunted house, there it was in Spaniard Nacho Cerdá’s Los abandonados (The Abandoned, 2006), drab and derelict as it lurked in the forests of an unidentified Russian locale. Upon a lawyer’s urging, an American adoptee returns there to inherit the property of her natural parents, a couple she never knew. The locals know the place is damned, but as with all movie heroines, she must be satisfied with empirical evidence. She meets a man who claims to be her twin brother on a similar task, but this reunion not only provokes a reenactment of their family’s sinister past, but also causes their doppelgangers to stalk them – their apparitions as chilling to behold as bodies dredged from a lake. With more to savour from its visual and sensory palette, Cerdá’s debut feature unfortunately remained careless on its verbose plot, whose design wasn’t as commanding.