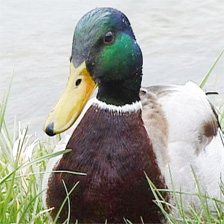 – Friedrich Hölderlin. “Hymn: The Ister” (quoted in The Ister)

… for man, it is an eternal question. Who are we? Should we develop computers? Should we land on the moon? Should we raze that forest? Build that dam on Hölderlin’s river? Should we do that? Technics is the question. As soon as I am technical, I am questioning. That is why Zeus is forced to send Hermes.

– Bernard Stiegler (interviewed in The Ister)

… philosophy will not be able to effect an immediate transformation of the present condition of the world. This is not only true of philosophy, but of all merely human thought and endeavour. Only a God can save us. The sole possibility that is left for us is to prepare a sort of readiness, through thinking and poeticising, for the appearance of the god or for the absence of the god in the time of foundering [Untergang] for in the face of the god who is absent, we founder.

One temptation when faced with a film of the sheer density of David Barison and Daniel Ross’ cine-essay The Ister is to run away from even dabbling on the surfaces of its labyrinthine complexities, to flee its wide-ranging lateral connections, to shun its intellectual ambitions. But cowardice, especially aesthetic cowardice, before such an awesome piece of film- and thought- making is despicable, and, worse still, un(der)-acknowledging…

So, do we “dive straight in”, negotiating cerebral rapids we know we do probably understand, half-managing those twists and eddies that we only “half-understand”, and completely avoiding the ruminative onrushes that we’ll perhaps never really “get” (after no-matter-how-many viewings and re-viewings)? Such a (pseudo-)rigorous response would possibly risk incoherence, and, again worse still, run “dry” and flush out as faux-academic – qualities refreshingly foreign to this often genuinely fertilising, seriously playful work. A work whose three hours of running (or is that “flowing”?) time sports the stately waddle of the darling duck that we see bookending the opening and closing frames, finally wandering, Chaplin-style, along a man-paved bank toward a truly “open” ending…

Or, alternatively, should we just “go-with-the-flow” of this “riveroad-movie” (German genre: wasserstrasse film) in order to impressionistically “get-in-the-know” of where it might be conveying or conducting us? For, before and above anything else, the film doesn’t really merely furnish a cinematically illustrated lecture on German philosopher Martin Heidegger’s famous 1942 interpretive reading of 19th Century Romantic Hölderlin’s hymnlike poem, The Ister. Rather, instead, we are provided with a sensitively considered and richly replenishing experience of responding and re-responding to the implications and ramifications of Heidegger on Hölderlin via A Meditative History of Modern Technology, by way of, amongst other filters, The Socratic Method. Yet our experience isn’t truly a dialogue of spoon-fed questions and answers around these pertinent topics, it’s instead a poly-vocal symphony; carefully orchestrated around the (many) pressing issues it sets up, an ever-expanding forum for at least nine speakers (if we include the two participatory filmmakers, themselves).

In short, the movie is a trip, a conceptually suggestive journey, and a thinking-and-feeling person’s travelogue along the Danube River (whose lower section was known in Graeco-Roman times as The Ister). The voyage takes us full-course, so to speak, from the waterway’s mouth near The Black Sea to its still-contested source in Germany, moving from Romania and Croatia though to Hungary, and on to Vienna and inevitably beyond, with a few pointed detours along the way. There are four principal “unravel”-guides, elucidating various issues, each of them a pre-eminent expert in his field of thought and endeavour: Bernard Stiegler, Jean-Luc Nancy, Philippe Lacoue-Labarthe, and filmmaker Hans-Jürgen Syberberg.

Just as Heidegger uses Hölderlin’s mystical ode as an inspirational launching-pad for ruminations on technology (informed by his earlier ground-breaking treatise Being and Time, 1927), so too, Stiegler uses Heidegger’s Hellenism as a template for both pointing toward the contemporary post-Industrial-Revolutionary crisis of “permanent innovation” as well as for pointing backward to ancient Greek mythologies which explain the acquisition by man of “tekhne” or “technics” (derived from the fire Prometheus was compelled to steal from Hephaestus.) Without the indisputable benefits of this volatile “gift”, man would indeed be bereft of qualities. From mythical “being” humankind historically “becomes” technical, affecting such essentials as memory and an understanding of our own mortality in the process.

So far, so heady. However, the flamboyantly leaping logic of these notions as we read, see, and hear their expression are visually countered by telling images that present, without ever imposing or overstating themselves. For instance, the concept of a highly Romantic (mythologising?) tradition in German culture versus a Post-Industrial, technical one is nicely conjured by a high-angle shot of the mist-laden Danube (straight out of a painting by Caspar David Friedrich) being followed by a very similar shot, which this time includes a mechanised tourist-friendly viewfinder flanking the image to the right. Mention of Roman emperor Trajan’s arrival in ancient Histria is, a little later, juxtaposed with footage of President George W. Bush and his wife disembarking from a plane to attend celebrations to mark Romania’s admittance into NATO. A track along a scale model of Trajan’s Bridge forecasts an ironically charged interview with Nemanja Calic, the Supervising Engineer of a Debris Clearance Project undertaken in the aftermath of NATO’s bombing of the major bridges of Novi Sad.

And just prior to the testimony from Calic (who matter-of-factly observes: “It is better to join your enemy than to face him and die”) we’re witness to one of the film’s most poignantly treasureable indirect signals, or “metonymic teasers”: the marvellous medium close-up of a young boy in a blue-grey jacket simply, and almost gently, smiling. This repeated visual haiku for something akin to “hope” or “human happiness” reaches a perfectly placed note of poignancy and underlying sadness by the third time it’s invoked. Such delicately positioned criss-crossing of the pictorial with the pensive is surely one of the great and enriching strengths (and stylistic gambles) of the film, inviting not-inappropriate comparison with what Chris Marker achieves by “coming back” to the shot of the Icelandic children on a road in Sunless/Sans Soleil (1982).

Meanwhile, if we’re still a bit confounded by how technics might be “technically” defined, Jean-Luc Nancy puts forward the distinction that “tekhne” is the knowledge or know-how that is obtained from “physis” from what physis does not offer of itself, The perhaps slightly misguided application of that “know-how” is then exemplified by a strangely solemn account of efforts in Budapest to retrieve not only the original Holy Crown of King Stephen of the Magyars but also his sanctified right hand! Concurrently, hollow-looking Ozymandias-like statues of Marx and Engels are, as the titles tell us, “relegated to an outdoor museum in the Buda hills”. We use our smarts to choose our own memorialising follies, what Stigler might term our own technically constructed “memory-supports”. (Previous to this we’ve been mischievously shown that even the philosopher’s wife, Madame Nancy has a private personal collection of cosmopolitan statuettes.)

Lacoue-Labarthe steadily and sternly steers us through the logical efficacy and (deeply problematic) ethical dimensions of Nazi-affiliated Heidegger’s “scandalous” post-WWII pronouncement that conflated the phenomena of mechanised agribusiness with the production of corpses in Nazi concentration camps. After which, he and the film edge effortlessly toward the stark reality of the once technically efficient Mauthausen Camp with its Sculpture Garden and grimly reminding “stairs of death”, these images preceded by Lacoue-Labarthe’s eloquent epiphany concerning how the Holocaust revealed humanity “all of a sudden short of breath”. It’s here where Lacoue-Labarthe brilliantly relates breath to human spirit itself, and back to the ancient Greek pneuma, adding: “And this is something Heidegger never wanted to hear, replacing such thoughts [i.e. historically cutting short the breath of spirit] with “lapidary remarks”…

The film’s final section features cineaste Hans-Jürgen Syberberg (who directed 1977’s Hitler: A Film from Germany) reflecting upon “memories of our old universe in the black studio of our imagination” and stating that the new, reunified Germany is “another Germany…. very friendly to everyone else, not so strong, but weak… a Germany that lost certain things. Maybe Hölderlin too. And Heidegger.”

The bittersweetness of these remarks are hauntingly underscored by finally making us privy, after all this (fascinating) meta-discourse about and around Heidegger and Hölderlin, to hearing the actual sound-recorded reality of the celebrated philosopher reading out the 72 lines of the originary hymn. Syberberg has already “cued” the filmmakers to do this, recommending the use of Heidegger himself (“not a normal actor”) and the results are oddly anti-climactic, vexingly “empty”. The, at times, madly mystifying lyric climaxes in a line that declares that what the river does, “No-one knows”. Cut to the non-knowing (but somehow all-knowing?) duck performing its sweetly solitary promenade alongside the film’s nominal subject.

That this veritable Aladdin’s Cave of speculative associations and rewarding insights has been so beautifully shot, and so elegantly edited by two young Australian scholars (and obvious film-lovers) constitutes its own ontological miracle. Across written text, spoken word, articulate visuals, and an endlessly creative and enquiring pneuma, Barison and Ross have fashioned an enduring documentary masterpiece. To paraphrase Heidegger, they have thought through and cinematically poeticised a “readiness”, an alertness to our all-too-human engagement with past and present worlds, with our past and (non-?)present gods (and demons), with our all-important relationship with our reason(s) for being and becoming. What we surely have here is an illuminating exemplar of the Godardian ideal: “Research as Spectacle”. Philosophy in Motion (Pictures): an authentic “narrative of ideas”.