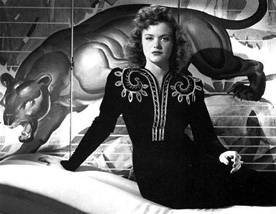 When the completed Cat People was first screened for RKO president Charles Koerner in the autumn of 1942, he wouldn’t speak to producer Val Lewton or director Jacques Tourneur, “then left in a hurry” (1). Critics were not bowled over by it, either – and then it took off with audiences, grossing an estimated $4,000,000, and saving a studio left seriously in the red by the indulgence of Orson Welles’ expensive but unprofitable masterpieces Citizen Kane (1941) and The Magnificent Ambersons (1942).

This success paved the way, for better and worse, for the rest of legendary producer Lewton’s career. Of the 14 films he guided into being before his premature death in 1951, nine were, ostensibly, “B” horror flicks. However, he and his creative teams invested these modest projects with a style and resonance that have distinguished them in the genre. To this day, Lewton is one of the few film producers who have left a body of stylistically coherent work.

The Russian-born Lewton (anglicised from Leventon) was a voluminous reader and compulsive performer – his aunt, Adelaide, became one of the early 20th century’s most celebrated actresses and flamboyant personalities, under the name of Alla Nazimova. He cranked out a number of novels, some a bit unsavoury, before finagling his way into a job as what is variously described as editorial assistant to or story editor for producer David O. Selznick.

In 1942, he took on the responsibility and challenge of helming a low-budget production unit at RKO. His task: to create a series of inexpensive and successful horror features. He achieved this, in spades.

He impressed his first effort with his own personality. An outwardly affable man, Lewton suffered from bouts of anxiety, hostility to authority figures, and a number of phobias – including, most significantly, an aversion to be being touched and a terror of cats. These obsessions coalesced into the thematic centre of Cat People.

The film can be dissected according to any number of theoretical approaches, and, as such, is a bit of catnip for intellectuals. Its incredible popularity at the time can probably be ascribed to its forthright discussion of sexual feeling – and its seeming demonisation of the same. The brief shot of water glistening on the heroine’s naked back as she crouches, sobbing, after a kill, is one of the more disturbing moments in 1940s film. But the armchair Freudianism underneath the film’s most wearisome bouts of imagery (doors, keys, swords) has long ago lost its punch.

More persuasive is Dana B. Polan’s assertion that “Cat People is a tragedy about a world’s inability to accept, or even attempt to understand, whatever falls outside its defining frames” (2). The doomed Irena’s struggle owes a great deal to The Wolf Man (directed by George Waggner and scripted by Curt Siodmak) from the previous year – particularly the cursed protagonist, who struggles to warn those who scoff around him (Siodmak was on board for Lewton’s next film, 1943’s I Walked with a Zombie).

In Irena’s case, the burden of proof increases exponentially, due to her sex. The completely unacceptable source of her transformative power, and the ease with which she is dismissed, insulted and preyed upon, mark important points, culturally, for pre-feminist America.

Her dark warmth is no match for the wooden, obvious, two-dimensional characters by which she is surrounded. Her strange tales are not even discomforting, and are easily pooh-poohed. Even when she returns to her estranged husband, Oliver, ready to engage with him sexually, he blandly informs her that it is too late, and leaves her to ominously rip the fabric of the couch she sits on.

Irena’s otherness only reaches those she kills or nearly kills. The film’s most unbelievable moment is also its most visually impressive – a drafting room, lit at night only by beams shining up from the now-antiquated “light tables” used by design firms, in which crouch and cower Oliver and the “regular gal” he is friends with at work (and turns to when his marriage is stymied), the two of them stalked by Irena in the form of a black panther.

As Oliver lifts a T-square and (none-too-convincingly, thanks to actor Kent Smith) sings out, “In the name of God, Irena, leave us in peace!” Cat People reaches a kind of nutty transcendence. Shadows are flung upward, a pragmatic tool is pressed into supernatural service, and a beast relents.

Another, more disturbing idea is that Lewton is playing out his fears and shortcomings. Irena, like Lewton, who devised the plot, is the personification of passive/aggressive. The only way she can convince she is dangerous is by allowing her animal self to be aroused. Her aversion to touch is, in this sense, a protective move. Meanwhile, she is full of stories, secrets, legends that she longs to relate, but that no one takes seriously.

Many ascribed Lewton’s early death to his inability to be taken seriously as an “A-movie” producer. In fact, his particular set of talents and limitations seem to have fated him perfectly for the series of horror films he created with such care and passion. He was not some artist to be pitied, struggling to rise above vulgarity and shock – he used these elements to create his shadowy, evocative world (3).