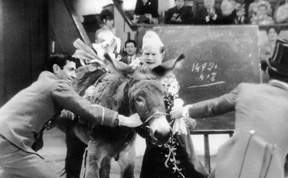 Quite typical in the critical writings on Robert Bresson is the temptation to assume that because his films often deal with religion, they are somehow themselves religious – narratives of figures who pass through a fallen world to achieve grace or even salvation. Balthazar the donkey has, for instance, been interpreted minimally as a character of purity and innocence who is witness to the joys as well as the depredations of the world (his name is that of one of the wise men whose mission it was to be there to consecrate the birth of the baby Jesus) or, maximally, as a Christ-figure himself, his journey from birth to death a veritable Calvary that ends in sweet martyrdom.

No doubt, such spiritualising readings are possible: their very persistence in the critical literature on Bresson shows how tempting they are. But scenes from Au hasard Balthazar like the one in which the drunk village idiot Arnold, on his way out of town and seeking to bid farewell to his origins, looks upward, looks downward to his donkey mount and then falls off and dies, should give pause to interpreters of Bresson as invoker of the transcendental. Here, the “heavenly” look upwards does little but bring the naïf crashing down to an ignominious end. Bresson’s cinema can seem finally to be nothing so much as the farcical deflation of spiritual vocation in which humans receive not so much grace as the constant reminder that they remain immersed in an everyday world where they can’t often even imagine that there is anything worthwhile beyond their given material conditions. Moments of happiness – let alone a deeper transcendence – are fleeting (like the visit of Mouchette in the film of that name to an amusement park). Bresson’s characters are rooted in a materiality of earthy and earthly existence and there they remain. If Balthazar bears similitude to the humans around him, it is that, with them, his life course is “one damn thing after another” (to invoke the characterisation of the French existentialists of the nature of existence). To the extent that he does differ at all from the humans, it is that he has no choice: his trajectory along the stations of life (which some religious commentators assimilate to the stations of the cross) is determined by accident, by coincidence, or by the “chance” that would be one possible translation of the French “hasard” in the film’s title. In contrast, Bresson’s humans are vaguely offered options and might have imagined or actually set out to build a different life course even if they rarely do seem, in fact, to heed the potentially life-altering advice and exhortations of others (Marie, for instance, is continually being told to give up on her n’er-do-well lover Gérard, and when she finally does decide to change her ways, this leads her to her destruction).

Bresson’s cinema is an intensely materialist experience which immerses its characters in a directly and viscerally physicalised environment. It also implicates the spectator in the experience of materiality through an emphasis on basic elements – water, mud, dust and dirt, earth, etc. – and on careful appeal to both a visual and aural sensorium (Bresson’s films have a well-honed sound design to go along with their carefully parsed imagery). We might even be tempted to assimilate this materialist cinema to the dialectical materialism of Marxism. After all, Bresson’s famous close-ups of hands often have them engaged in financial acts of exchange (see, especially, Pickpocket, 1959, and the aptly named L’Argent, 1983). Likewise, so much of Au hasard Balthazar chronicles how the donkey circulates from one exploiter to the next, each finding his or her own way to extract any last bit of value from the beast. Take, for instance, one of the film’s memorable characters, the grain merchant who Marie turns to ambiguously for shelter: this figure offers perhaps one of cinema’s most trenchant depictions of a naked, venal self-interestedness, a portrait that is unforgiving because the character himself is so unforgiving and stands for nothing but interest and exploitation.

But it is worth remembering that the grain merchant is a very old man: proto-capitalist he may be, but he is also an index of a vanishing world, soon to be supplanted, like so many other anachronistic figures (including Marie’s stubborn father, wedded to the land) are, by an encroaching modernity. Perhaps no image so well catches Au hasard Balthazar’s overlay of various temporalities – modernity and rural life together – as the scene in which Gérard resentfully performs his job of distributing bread for a baker by pacing forward on his motorcycle with baguette-laden Balthazar in tow.

With Gérard (and with Marie’s fatalistic attraction to him), Au hasard Balthazar approaches the sociology that was common in 1960s New Wave cinema (and visible in the films of Godard especially, who structured a major interview with Bresson around Au hasard Balthazar) and that chronicled the empty hedonism and destructiveness of disaffected youth. But it seems evident that the meagerness of affect in these yé-yé youngsters extends in some way to the whole community beyond them and even to the film’s own sober look at this community. More than sociology, Bresson’s cinematic materialism purely shows (rather than diagnoses) a world that simply “is”. Life, cruel or not, is finally an inevitable passage from birth to death, and in that passage life is what it is.

But if there is no ultimate escape in Au hasard Balthazar, and if few characters seem to make choices to outrun their fate or redeem their purpose on earth, the film perhaps paradoxically allows the spectator a glimpse of freedom precisely by depicting no higher, guiding truth. Specifically, the lack of moral voice to the film means that the spectator is “free” – at least during the course of the film’s unfolding – to react to this world as he/she wishes (including religiously if so desired). Maybe that’s not much of a freedom but it’s perhaps the best that this claustrophobic cinema can offer.

In this respect, one of the most stunning scenes in Au hasard Balthazar is also one of its seemingly simplest: the runaway Balthazar is brought into a circus and introduced to the other animals in a sequence of cross-cuts that go back and forth between his gazing eyes and those of the other former denizens of the wilds. The scene condenses much of the complexity of interpretation in the film overall: we can, if we wish, read emotions, meanings, and even acts of empathy and communication in this ping-pong of looks from one animal to another. Or we can just watch (like Balthazar himself), witnessing a world that seems curious, if not outright cruel at times, but that passes inexorably without our ability to alter its course. The scene is like a curious parody or replay of the famous experiment by Soviet director Lev Kuleshov, in which cross-cutting between an expressionless actor and a series of objects supposedly was read by spectators in ways that imputed envy, desire and sympathy to the gaze of the actor as he looked on each item anew.

Shot in the chest, Balthazar has as his destiny to die and we watch that unfold as an implacable logic. Beyond all easy moralism, Bresson lets the world simply be, and that perhaps provides the spectator with much more than any easy spiritualism or redemptive solution.