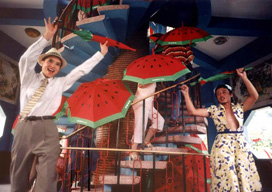 As expected, this current issue of Senses of Cinema contains the 2005 World Poll. As old as Senses itself, this is the sixth such edition of the ‘year in review’ poll.

Inevitably, it has changed and mutated over the course of time, but it still adheres to the basic principles of that first edition. Then, as now, it was not to be a conventional ‘10 Best Films’ list – too reductive a format to allow for the myriad encounters people have with films and film culture over the course of twelve months of viewing experiences. Nor were the contributors’ lists to be tied to the limited pool of theatrical releases on offer in the marketplace. So, perusing the lists on offer, the reader is likely to find mention of the gamut of extremes from a Hollywood blockbuster on release in a multiplex to an obscure student film screened in an inner-city café.

It was with considerable foresight that the then Editors of Senses titled the initial exercise “Favourite Film Things 2000” (see Issue 11, December 2000–January 2001), and it continued under such a name for a subsequent number of years. It is only a small issue of semantics, but the use of the term “things” freed the exercise from being one about the film as ‘object’, pure and simply, and allowed for the acknowledgement that a multiplicity of unquantifiable factors impinge on why we treasure a film – the specific viewing context, conversations with friends, who and what we read about a film, and so forth.

Much of that information is filtered through the thoughtful and varied annotations that individual authors have chosen to supplement their entries. It also meant that contributors could mention films in which a detail – a performance, a colour scheme, a specific sequence, a camera movement, an edit, the sound design – rather than the whole film left a lasting impact which made for a memorable experience.

Its subsequent renaming as the “World Poll” was in acknowledgement of the growing involvement of our international contributors. Even allowing for the repetition of film titles that recur from list to list, all told there are several hundred titles mentioned, which reflects the ever-increasing multiplicity of viewing experiences – film festivals, special retrospectives, cinémathèques and the continuing discoveries to be had via DVD editions – within the global film culture.

Therefore, finally and most important, we thank all the writers who took up the invitation to participate in this year’s World Poll, thereby making it into a rich tapestry of voices from around the globe.

For those readers less inclined to indulge their time on an annual world poll, there is no need to panic: the usual full range of stimulating articles will keep you engaged.

Our thanks go to all the authors who contributed to the general section of the journal.