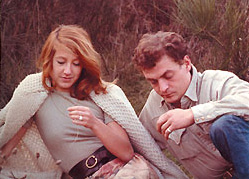 I think the single trait that singled-out Maurice Pialat from most other filmmakers is that he dared to look at things in the face, frontally, directly, without any kind of sentimentality, embellishment, softening camera movements or preparatory transitional shots. And what he saw – usually what he had really seen, actually experienced, since most of his films have an autobiographical background – is precisely what, brutally unadorned, as a raw block of space-time thrown or shoved at them, viewers see – a hard, terrible violence. Prior to this “terrible violence” the films build tension before exploding unexpectedly, the audience as un-warned and unprepared to cope as the characters in the story. That’s why, so often, a shot in a Pialat film can be compared to a blow, to a rock falling, to a gunshot.

The situation in La Gueule ouverte – a title which refers to the open, almost yawning mouth of a corpse – lends itself very well to the representation of a particular kind of depressive and exasperating, powerless and sometimes almost endless-seeming waiting surrounding a death that is either expected or is suddenly seen as the possible outcome of a long illness, as the result of an unsuccessful chirurgical intervention.

Family members, not always close or on the best of terms, are forced to meet again or are thrown together at close quarters – in the parents’ home, a hospital corridor or waiting room – with nothing much to say or do but wait, though perhaps with affairs or grievances to settle. They are mostly “alien” relatives, with little in common or nothing to talk about – boring, uneasy and uncomfortable. Meanwhile, the daily lives of each person go on unabated, including their own sentimental troubles, job problems, anguish or dissatisfaction at the course of their own individual lives, relationships, businesses. The presence of death always invites recollections and reassessments that are often unsavoury or bitterly disappointing.

This is what Pialat so very nakedly shows in this film. He presents a kind of X-ray that moves beyond the fleshless black-and-white abstraction offered by such in-depth clinical explorations of the body – those that reveal what lies underneath, is often hidden behind the walls of appearance, below the skin or in the marrow, inside the chest or the brain. But Pialat presents a kind of flesh and blood, muscle and bone X-ray image – an image that is endowed with movement and jumps eerily from one sequence to another. Proceeding not to the sequence which would have conventionally been next, but to one three or four steps removed from it. There is no chronological, dramatic continuity to speak of, rather the logical, unstoppable forward movement of time running out.

These qualities make La Gueule ouverte the opposite of filmed theatre, and also quite a test for the audience. It is a hard film to sit through, one that requires some strength to watch unflinchingly from beginning to end.

The film shows without the slightest trace of sublimation, self-pity or sentimentality what it really is to stand in hopeless, powerless watch for hours, days or even months, feeling inadequate and useless while tiredly sitting near a bedside or restlessly walking up and down, aimlessly, like a caged tiger around the house, waiting for the once and still (or perhaps again) loved one to die. This figure is probably in pain, or suffering from some sort of physical or psychic decay, and is unable to speak fluently or even to breathe. These are the sorts of things one rather chooses to ignore or forget and does not want to think about, or which one knows directly from close quarters experience.

This isn’t normally what producers wishing to cater to audiences want to get from a filmmaker, no matter how talented or honest he is. This is also not what most people who go to the movies seeking entertainment and a way of “killing time” until dinnertime, expect or want to witness for 90 minutes. People don’t like to be reminded of their mortality, not even by poetry, and much less in such a stark, humourless, prosaic way, proceeding through an unrelenting succession of shots like those of the earliest Lumière films.

That’s why La Gueule ouverte was one of the least commercially successful films Pialat ever directed, despite being one of his best. It is perhaps the most balanced and true, and the most faithfully realistic film he made. But there you are – that was precisely what Pialat wanted to show: that time is always killing you, no matter what you do or how healthy you are, regardless of whether you feel sorry or happy.