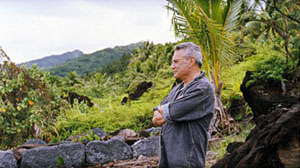 Claire Denis’ latest film-poem, the nearly non-narrative L’intrus (2004), is a startling examination of bodies and their inherence in the world. Meaning is transmitted through faces and gestures, and how they impede, and are impeded upon, by the landscapes around them. From Beau Travail (1999) onward, I have been struck by how concrete the bodies of Denis’ performers are, how each movement is scratched into the frame – no current filmmaker devotes so much attention to the beauty of human motility and tactility. This attention necessarily subverts narrative, as the cause-effect chains of the story are replaced by connections that are solely associations of images. This gives these recent films their woozy, dream-like and incantatory quality.

L’intrus was inspired by a brief essay, by French philosopher Jean-Luc Nancy, of the same name. The essay is a reflection by Nancy on the physical and metaphysical fallout of the heart transplant he had received ten years previously. What the work boils down to is this one question: “If my heart was giving up and going to drop me, to what degree was it an organ of ‘mine’, my ‘own’?” (1) His body becomes a stranger to himself, and he loses the sense of individual wholeness that he managed life with before.

He now has to objectify part of his body to his consciousness – an object that he ignored before, something that was as “absent to me till now as the soles of my feet walking” (2) was now “intruding through its defection” (3). A failure in the fabric of our everyday existence makes the banal visible to us, and its continual failure keeps it from retreating from conscious thought. He is no longer whole, but a “montage, an assembly of functions” (4), constantly objectifying the body and its processes.

Michel Subor puts this assembly of functions into motion in Denis’ film. He plays Louis Trebor, a father who has rejected his son, and who is dying. He receives a new heart, as the scar on his chest shows, but the origin of this new heart is buried in a fever dream of multiple intrusions. His cabin in the forest on the French-Swiss border is set upon by a gang of rather nice-looking youths, and a bohemian girl makes his abandoned cabin her home. Both are met with violence as his cabin rejects these strangers just as his body battles his foreign heart.

The boundary between interior and exterior conflict dissolves, as Trebor’s new heart becomes an expansive metaphor for the unsuitability of his body for human connection. The intruders’ violent ends echo the combativeness with which Trebor dealt with the world around him. It is not only his son he rejects in order to retreat inside himself in his cabin, but also his lover, who he pushes away with detached scorn.

Whether the violent episodes are real or imagined becomes unimportant, what matters is the swirl of images, the connections Denis is able to make between Trebor’s body and the fiercely present world. The negligence he shows his son when he approaches him on the street, palming off a few dollars on him, is given equal weight to an image of Trebor soaking his face in the sun, or a heart pulsating in the snow. All are of a piece of his “assembly of functions”, as his perceptions, his imaginary, and his emotions are no longer part of the centripetal force of an “I”. The cause-effect manner of the rational mind gives way to a poetic miasma of the collision between consciousness and the imaginary:

There is simply the physical sensation of a void already open in my chest, along with a kind of apnea wherein nothing, strictly nothing, even today, would allow me to disentangle the organic, the symbolic, and the imaginary, or the continuous from the interrupted – the sensation was something like one breath … (5)

Denis’ narrative is like this one breath as images merge into one another, dreams are indistinguishable from reality, and meaning comes from the beautiful disunity of the human animal. What Denis wrings from this is remarkable. Images of Trebor from the period previous to the transplant find him melting into the intruding world – we see him eager to annihilate his ego in nature. He is seen naked, swimming in the water, a close-up of his hand caressing the sandy shore, then petting one of his omnipresent dogs. These caresses follow a scene in which his son, played by another Denis regular, Grégoire Colin, furtively makes love to his wife, with a languorous close-up of his hand exploring her body. The difference is acute: Subor loses himself in the world; Colin finds himself in the embrace of another.

The images of Subor after his surgery find him weighted with intrusions, forever haggard. Denis lovingly details the wrinkles on his face, and soberly documents his fall, imaged in the forest dreamscape as frozen on the ground, his wound torn open, being dragged behind a horse. This nightmare of the wild recurs throughout, jarringly edited into the landscapes he attempts to escape to.

Along with this landscape, the image of a dark-haired woman recurs, played by Yekaterina Golubeva. She is Subor’s shadow, forever watching him, forever intruding upon him, the exteriorisation of his foreign, mercenary heart. Anywhere he roams, she is there, a reminder of the fragility of his heart and of his sham relationships – a non-living rebuke to his relentless interiority.

The opening of his chest lets the world in with it: “It is not that they opened me wide in order to change my heart. It is rather that this gaping open cannot be closed. I am closed open.” (6) The operation opens him up and lets in the ceaselessly changing world of human relations he had shut himself off from. He attempts to escape from the site of the intrusions, the cabin, and from the world of his disappointed son and empty affairs. Instead of confronting these intrusions, he tries to outrun them, camouflage himself against them. The two landscapes where he attempts this are the antiseptic modernity of Pusan, South Korea, and the tropical paradise of Polynesia.

Pusan is an intermediary space where capital is exchanged for use somewhere else. It is a space that does not intrude because it is all surface. Trebor becomes calm as he slips into this non-combative city: he shaves, bathes, and slithers into a sharp suit before completing the sale of a yacht. The discussions indicate he will use the money for his son, an indication that perhaps he’s recognizing his failures, but in the final landscape we see it’s only a further denial. He papers over his “closed open” wound with these accoutrements and this money. Agnès Godard’s images glimmer with a passive sheen. Getting comfortable out of the howling unconscious of the cabin, he relaxes by getting a massage, revealing the closed-open wound that is a brusque reminder of the intruder inside. 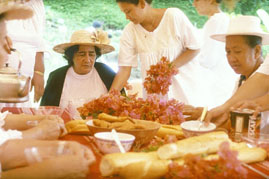 He absconds with the money acquired to Polynesia, looking for paradise, and for a son. The colour turns lush and supple, as Denis knowingly draws upon Gauguin’s romantically exotic paintings of the region. This oasis is where Trebor tries to literally rebuild his life, as he refurbishes an old house of his by the shore. Denis breaks up Trebor’s reclamation project by emphasizing the artifice of his venture, as it is predicated upon a search for a son that probably does not exist. He is convinced he fathered a son on the island years ago, but no evidence is brought forward to back it up. He is dreaming a son to replace the one he left behind.

Denis cuts in footage here from an unfinished 1965 film, Le Reflux, which starred Michel Subor and was directed by Paul Gégauff. It shows Subor trekking through the same Polynesian space, forty years earlier.  It is a jarring and affecting moment, as it pulls us out of the pulsing regularity of Denis’ images, and is a pointed example of how editing can transcend time and space, connecting decades through the body of an aging actor. His presence marks time, marks the landscape, as the landscape and time are now more clearly marking him. The sheer fact of ageing makes Trebor more sympathetic, and the following reflexive scene furthers the idea that he is simply a fool and not a monster.

This moment is a hand-held sequence of villagers auditioning various people to portray the role of Trebor’s son, in order to satisfy his search that they know to be fruitless. Each candidate steps up, and the panel jokingly rejects each one for various reasons, whether it is looks, speech or etiquette. The sequence is light and funny, which is a massive tonal shift from the melancholy reverie on death that is the rest of the film.  He spends an afternoon with the chosen actor in a hospital, accepting feigned love to cover over the “old viruses that have always been lurking in the shadow of my immune system – life-long intrus, as they have always been there” (7).

The death that haunts him never arrives, but is deflected onto one he loves – another dream-image perhaps, but the weight of the body seems all too real, and the casket is concrete and banal. The last shot we see of him is on a boat, ever journeying on, having a cup of tea with a fellow traveller as the casket lies in the background. It is a weightless, empty moment, allowing him a bit of privacy from the ceaseless caressing of the world.

Denis, ever generous, chooses not to leave us with this impotent creature, but, as with her most recent features, with an image of euphoric physical release. In Beau Travail, it is the spastic dance of Galoup (Denis Lavant) in the nightclub; in Vendredi Soir (Friday Night) (2002), it is the joyous run of Laure (Valérie Lemarcier) down a Paris street; and, in Vers Mathilde (Towards Mathilde) (documentary, 2005), it is a virtuoso performance by one of Mathilde Monnier’s dancers. With this film, Denis chooses Béatrice Dalle, who had a brief role earlier in the film as a dog breeder who rejects Trebor’s advances, to represent Denis’ look of wonder upon the world. Merleau-Ponty describes her attitude:

The world and reason are not problematical. We may say, if we wish, that they are mysterious, but their mystery defines them: there can be no question of dispelling it by some ‘solution’, it is on the hither side of all solutions. True philosophy consists in relearning to look at the world … (8)

Denis offers no solutions to the mystery, only a vision of the world where bodies can express the self in the midst of ceaseless intrusions. Trebor could not accept his intrusion – so he rejects his self and is swallowed by the world. Dalle, exerting her will over a pack of dogs, urges them on in her sled, controlling and powerful. She beams and laughs as the wind strokes her hair, wild and free and with death around the corner. And she doesn’t seem to care.