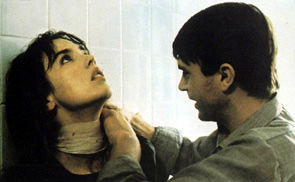 When faced with Hollywood’s unceasing parade of romantic films that sport their saccharine happy endings like labels for Calvin Klein’s ready-to-wear range, it is, to say the least, refreshing to find a film that views romantic love as a form of apocalypse. Andrzej Zulawski’s Possession (1981) is a celluloid canvas of such intense emotional torment that it can effectively act as a two-hour advertisement about the inescapable dangers of marital union.

Zulawski became an outlaw in Communist Poland, immediately after making his first two films – Trzecia czesc nocy (The Third Part of the Night) (1971) and Diabel (The Devil) (1973 but not released until 1988) – in which he easily managed to offend the government, the church, his audience and his teacher, Andrzej Wajda. He has continued in the same vein, making a further eleven films that are to this day mostly unknown to the English-speaking audience.

Possession, or its horribly mutilated 89-minute doppelganger, is a rare exception. It was distributed in America as a grindhouse exploitation film, gaining in notoriety as a laughably absurd cult film. (I first saw the film in Auckland at the Incredibly Strange Film Festival.) The director’s cut of the film, on the other hand, leaves little room for laughter. It is a baroque tragedy that develops like a Dostoevski novel rewritten by William Burroughs and visualised by Francis Bacon.

Zulawski made the film in 1981 when he was in exile from Poland, shuttling between Europe and the United States. It is a French-German co-production, made in English with a Polish creative team and a multiethnic cast.

The story starts somewhere in the middle of an unnamed European city, aptly played by the divided Berlin. Mark (Sam Neill) returns home after a mysterious government assignment. His wife, Anna (Isabelle Adjani), greets him with the news that she wants to leave him for someone else. Mark becomes so distraught that he falls into terrible depression. Unable to let Anna go and dangerously close to schizophrenic paranoia, he later establishes that she has been having an affair with a spiritual guru, Heinrich (Heinz Bennent). But it becomes apparent to both men that Anna has another lover. Marc sets a private detective on her trail, who is promptly obliterated after discovering that the object of Anna’s desire is not exactly human. The third act of the story is a horrifying grand guignol of poisoned narrative strands that entangle and choke themselves like so many snakes in a dark pit.

Do not be confused, this is above all a love story. In fact, according to the director, the film stems directly from his own life, reflecting his separation and divorce from his first wife. Viewed from this biographical stance, the film becomes a painfully honest confession by its director.

It is in many ways a classic melodrama – an “inhibited soap opera”. What makes Possession so unique is that it dares to let go of logistical barriers, accentuating the bareness of emotions that are exposed for us to see like bleeding wounds. This is reflected in Zulawski’s direction of his actors. Adjani and Neill seem to be in a state of cataclysmic seizure for most of the film: their bodies are in constant and aimless movement, lurching and jerking as if trying to exorcize some unspeakable evil. Of course, the pay-off is that Adjani does exorcise the darkness within in the form of a slimy, tentacled monster courtesy of Carlo Rimbaldi.

As it switches gears into a supernatural territory, the film becomes allegorical – but of what? Is it meant to critique the patriarchal/capitalist structures of Western society, the stifling repression of the Communist system or is it a Freudian poison-letter to the castrating horror of the female body? The film’s lasting power lies in its omnifariousness, which enables it to withstand any number of readings. But, above all, I see the film simply as a treatise on the impossibility of love. The social and cultural vacuum – exemplified by the empty city in which Zulawski has put his characters – only accentuates the primal, the irrepressible and the mystical. And the key word here is possession. Not in the sense of demonic possession – that’s a red herring thrown in by Zulawski. The title refers to the uncontrollable desire of the main characters to possess each other physically and spiritually. Zulawski wants to show that love ultimately becomes a trip to hell, and yet I don’t think he was being ironic when he called his third film, L’Important c’est d’aimer (The Important Thing is Love) (1975).

Brunno Nuytten’s amazing cinematography, with its astonishing pre-steadycam, handheld camerawork and a palette of blues and greens, perfectly captures the rotting and diseased atmosphere of Zulawski’s hermetic universe. Also notable is the pulsating score by the wonderful Polish composer Andrzej Korzynski, which plays like a demented death march and manages to be terrifying without a single violin around.

Possession‘s first reincarnation on the DVD format occurred thanks to Anchor Bay in an excellent widescreen anamorphic transfer, which preserves the original aspect ratio of 1:1.66 although the actual image looks more like a 1:1.78 format. Also included on this DVD is an commentary by Zulawski with his biographer Daniel Bird. Zulawski is eloquent and entertaining in his imperfect English and does not shy away from clarifying some of the murkier aspects of the film’s symbolism. As becomes a true cinematic renegade, the director can be delightfully nonchalant: “I don’t give a fuck about the audience”, he says at one point.

Umbrella Entertainment’s DVD seems to be a direct port of the NTSC release, thus we get no new material and the image suffers slightly from shimmer and aliasing. There also seem to be audio synch problems and the image is not enhanced for widescreen televisions. Thankfully the picture is clear and free of any major problems, and the commentary is here for all to enjoy, as well as the film’s radically different US and European trailers.

After many years in near obscurity, Zulawski’s œuvre is slowly being rediscovered by new audiences who may be responding to his curiously moralistic (or Catholicist) brand of anarchy. And whether one likes looking into Zulawski’s imploding crystal ball or not, one has to admire his courage for consistently beating his own cinematic drum in this most undemocratic of arts.