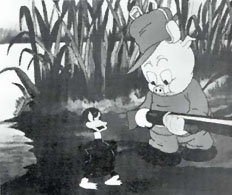 Even icons have to start somewhere.

Just as film divas of flesh and blood began their careers with humble bit parts, so did that of that temperamental, greedy, cynical waterfowl, Daffy Duck. And the unassuming cartoon short in which he first appears, Porky’s Duck Hunt, is significant not only as his debut, but as the launching point for the snappy, smart-ass tone that would separate Warner Bros.’ cartoons from its competitors, and keep their work relevant and resonant today.

American animators in the 1930s were a scruffy, itinerant bunch. Most bounced around from studio to studio, serving apprenticeships in the cartoon production houses of such figures as Walt Disney, Walter Lantz (best known as the home of Woody Woodpecker), the Fleischer Brothers (Betty Boop, Koko the Clown), and Disney’s once and future partner, Ub Iwerks. Serendipitously, an irreverent and rowdy crew came together at Leon Schlesinger Productions, in a ramshackle, bug-infested back-lot bungalow that later earned the affectionate sobriquet of “Termite Terrace” (1).

For a time this group included such leading lights as Chuck Jones, Frank Tashlin, Robert McKimson, and Bob Clampett, all working under the loose supervision and raucous inspiration of Fred “Tex” Avery (who lost the vision in one eye during an office paper-clip fight!). The team enjoyed that most happy of fates to be found inside any corporate structure – they were largely ignored. Left to their own devices, they began gradually and collectively to shrug off the nominally logical, linear, kid-oriented whimsies that emerged from other rivals’ drawing boards.

In terms of structure, Porky’s Duck Hunt uses elements of both the “hunted-outsmarts-hunted” paradigm that dominated “Warner Bros. cartoons” (although that studio ultimately owned the characters, Schlesinger was, in essence, an independent contractor until Warners bought him out in 1944) until its demise, and the hodgepodge “riffing” technique that was in common use up to that point. This latter “attack” would take a generic subject (the city, hunting, hospitals) and wring all the gags the creators could out of it.

The opening of Porky’s Duck Hunt has a Pickwickian resonance to it. To the jaunty musical strains of “A-Hunting We Will Go”, the camera pans right across an assembly of objects – a manual on “How to Duck Hunt”, and several empty boxes labelled One Sure Fire Shotgun, One Wear-Well Hunting Suit, Assorted Duck Decoys, and 25 Shells. We then find our hero, Porky, admiring himself in a full-length mirror in his otherwise tumbledown apartment.

Porky was one of the last of the studio’s harmlessly “cute” leading characters. His toddler-like appearance, clumsiness, and gentle disposition marks him as a figure geared to appeal to preliterates. Even his stutter contributes to the pity the audience may have felt for him. Joe Dougherty, Porky’s original voice, was genuinely afflicted with one, and in this film, Mel Blanc “plays” Porky for the first time, retaining the character’s distinctive speech impediment.

Poor Porky is all thumbs – he frightens his pet dog, and then accidentally blasts a hole in his ceiling. This prompts a knock at his door, and a punch in his face, from his upstairs neighbour, who displays the buckshot hole in his pants as he turns to go back upstairs.

The scene quickly shifts to the wild, as Porky cautions his dog to “be very, very quiet” – foreshadowing Elmer Fudd’s lisping catchphrase in his appearances with Bugs Bunny (and sometimes Daffy Duck). The gags, good, bad and indifferent, begin to flow. A single duck flies overhead, prompting a phalanx of hidden hunters to emerge, blasting away – and missing. A dog-headed, cross-eyed hunter (the soundtrack dredges up “I Only Have Eyes for You” – Carl Stalling’s nimble manipulation of pop tunes is displayed here) brings down a brace of airplanes.

Finally, Daffy enters the picture, landing amid a raft of decoys and quacking. Porky winks at the camera – not the first time the fourth wall will be broken here. He wades out under the surface of the lake and pops up, getting the drop on Daffy. The duck cringes but remains in place patiently, so that the joke will play out (the gun squirts a harmless stream of water). Already we are in new territory. This is vaudeville, not naturalism. Avery and company seem to have an unstoppable need to transcend the conventions of the medium. To mockingly play to the audience is the most effective way to get that audience to subvert its expectations, a tendency that only grows as the years pass at Termite Terrace (and reaching a peak in the early to mid-1940s). Now we are complicit with the animators – and now there’s a reason for adults to keep an eye on the screen as well.

More tangential joking breaks up the flow of the narrative. Daffy alighting on an unlikely floating barrel of booze leads to its blasting, transitioning to a chorus of drunken fish crooning “On Moonlight Bay” in close harmony. Later, a hand holding a sign will point out “This is an electric eel, folks”, right before Daffy swallows it and lights up – a contemptuous deflation of a bad joke.

Daffy’s first speech erupts from another interruption. Porky downs Daffy, his dog makes like a retriever (“Go g-g-get him, R-R-R-Rin-Tin-Tin!” exclaims the ecstatic swine). When the two animals return, it is Daffy who has rescued the unconscious pooch. Quickly, he whips out a sheaf of paper and cries, “Hey, that wasn’t in the script!”

Daffy replies, “Don’t let it worry you, skipper – I’m just a crazy darn-fool duck! HOO-HOO! HOO-HOO!” And away he goes, strutting, flipping and bouncing away across the surface of the lake. Clearly, after this, anything goes. Although Daffy was destined to change from pure zany to disgruntled egotist, the foundation of the basic driving conflict in Warners animation shorts is here. Hunter and hunted, predator and prey – only the damned quarry won’t cooperate! The Elmer/Bugs, Tweety/Sylvester, Road Runner/Coyote dynamic is established. (In fact, a loose remake of this film made the following year, Porky’s Hare Hunt, gives us a rabbit that, two years later, will crystallise into the Bugs Bunny we know and love.)

Later in the film, Porky again draws a bead on Daffy. The gun won’t fire. Tsk-tsking, Daffy takes the gun from Porky, fixes it, and returns it. “It’s just me again!” Daffy announces. “HOO-HOO! HOO-HOO!” Even the target’s assistance can’t facilitate his demise.

The seeds of the transition of Porky from leading man to sidekick is in that exchange. Daffy’s relentless putdowns and humiliation of Porky, as well as his grandstanding, turns Porky into a comic foil – a role he would play to perfection in such outings as Chuck Jones’ Drip-Along Daffy (1951), Deduce, You Say (1956) and Duck Dodgers in the 24 1/2 Century (1951). Only in his few appearances as the disgruntled owner of a nervous, mute Sylvester (Jones’ Scaredy Cat, 1948, Claws for Alarm, 1954, Jumpin’ Jupiter, 1955), or as the unwilling master of the little-remembered but strongly conceived Charlie Dog (Jones’ Little Orphan Airedale, 1947, The Awful Orphan, 1949) will he get to re-exercise any kind of dominance.

As Porky’s Duck Hunt plays out, the padding becomes more apparent. Porky’s shooting a hole in his boat prompts Joe Penner to rise from the water, delivering his then-familiar catchphrase “Wanna buy a duck?” (2) Porky jackhammers himself into the ground with the force of his firing. Finally, Porky’s dog swallows his duck call and begins to hiccup-quack, and the two flee for home, pursued by shot and shell.

Porky returns home. Continuity is completely abandoned – it bears no resemblance to the apartment Porky left at the beginning of the cartoon. Outside his window, a flock of ducks led by Daffy display themselves, in spite, as a shooting-gallery menagerie. Porky aims, but his final impotence is underscored when he discovers, “D-d-d-d-doggone it! No more bullets!” He throws the gun to the ground – and of course, we get a reprise of a blast through the ceiling, and the neighbour’s angry retaliation.

All in all, the introduction of Daffy, as well as the full debut of Blanc (the defining voice talent of his generation) and the intimations of the “license” to come, all make this short a groundbreaking effort.