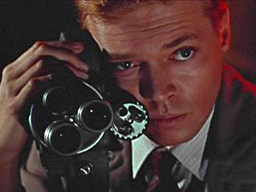 Director Michael Powell, together with his collaborator the Hungarian Emeric Pressburger, formed one of the cornerstones of the British film industry in the 1940s and 1950s. Their credits include A Matter of Life and Death (1946), Black Narcissus (1947) and The Red Shoes (1948). However, when the collaboration officially finished or stalled in the late 1950s, Powell made the notorious Peeping Tom, all but destroying his career, at least in Britain. Originally released in Britain in March 1960, Peeping Tom was greeted with a torrent of critical abuse, as well as moral denunciation (1). Allegations of “sickness”, “morbidity” and “perversion” were common to many reviews of the film, with one outraged critic even suggesting that the film should be flushed down the nearest sewer! (2) The controversial subject matter in Peeping Tom was to attract an even more intense and sustained level of condemnation than Alfred Hitchcock’s confronting Psycho, also released later in the same year. Moreover, Powell seems to have been genuinely taken aback by this vitriolic reception, possibly believing that the inclusion of sardonic humour, as well as the avoidance of overt titillation, would compensate for, or even sanction, the disturbing premise of his film (3). This premise centres on the character of Mark Lewis, played with subtlety by Carl Boehm (son of the famous German conductor Karl Boehm). Mark is shy, charming, mild-mannered – even likeable. He is also a psychopathic killer. In a perverse twist, Mark combines his job as focus puller at a film studio, with the extra curricular activity of filming his victims as he stabs them to death with a spike connected to the tripod leg of his camera.

With Peeping Tom, Michael Powell and scriptwriter Leo Marks created a dark and horrific portrayal of a sadistic killer who is helplessly possessed by an obsession with filming fear. Mark enacts this destructive and morbid obsession by filming the fear on the terrified faces of his hapless victims at the precise moment of their death.

The real villain in Peeping Tom, however, is revealed to be Mark’s father (played perversely by Powell himself, casting his own son Columba as the young Mark). Through what appear to be old black-and-white home movies, we learn that as a child, Mark was tortured sadistically by his father (a respected and revered scientist) to further his own bizarre experiments into the reactions of the nervous system to fear. When we view this disturbing footage, it is even possible to feel sympathy for Mark as a victim of his father’s torturous experiments. Significantly, this also raises disturbing questions concerning the extent to which Mark should be held responsible for his own sadistic and horrific behaviour. We also learn Mark’s father is dead, and that he escaped retribution for the sadistic and torturous experiments performed on his own son. Moreover, the reputation of Mark’s father as a brilliant scientist remains intact. This is evidenced by the glowing accolades bestowed on him and his research into scopophilia (“the morbid urge to gaze”) by the psychologist Mark encounters on the film set. Only Helen (Anna Massey), the young woman who befriends Mark, as well as the audience, know the real truth about his disturbing childhood experiences.

Comparisons can be made between Peeping Tom and Psycho, as both these films share a fascination with voyeurism. The two main characters of Peeping Tom and Psycho (Mark and Norman Bates respectively) are both voyeurs. However, Powell takes this voyeuristic notion significantly further in Peeping Tom by implicating both himself and the spectator (4). For example, at the beginning of the film – when Mark murders a prostitute – we are implicated as voyeurs. Powell lets us see exactly what Mark is visualising through the lens of his camera as he prepares to film her gruesome death. Powell focuses on the camera as a crucial prop in the representation of voyeurism. Mark demonstrates this voyeurism through his involvement with the camera and with the filmmaking process. In addition, this fascination with the camera also signifies the transition of Peeping Tom into a film-about-film. Mark’s disturbing and bizarre filmmaking project can be viewed is a highly mechanised, yet intensely private, experiment in artistic self-expression (5).

This voyeuristic notion is also demonstrated by the scene in which Mark, having filmed the horrific murder, sits at home in a private cinema to watch his “documentary”. The murder is shown from three different perspectives. We see what Mark is visualising from his viewpoint. We also see what Mark’s camera is viewing and thus his “directorial” vision. In addition, we see what the murder victim saw at the precise moment of her death (6).

Mark’s internalisation of his father’s sadistic obsession with filming the spectacle of fear results in his own horrific suicide at the film’s conclusion. Indeed, it could be argued that Mark’s suicide is the culmination of the ultimate punishment that he must inflict on himself as retribution for both his father’s sadistic experiments on him, as well as his own murderous obsession. Moreover, one could also theorise that Mark’s suicide, using his own horrific and gruesome technique, is the final aesthetic expression of this obsession (7). In addition, even though the authorities now consider the case closed, the whole sordid episode appears to be far from resolved. For example, what about the ongoing psychological affect of Mark’s horrific behaviour on Helen?

It is worth noting that, possibly as a respite from the overtly disturbing nature of the story, Powell includes some melodramatic elements in Peeping Tom. However, he employs them in an uncharacteristic and unconventional way. These elements include the dramatic use of piano music and the intentionally excessive and stereotyped acting in some scenes, pertinent examples being the characterisations of both the blind director and the psychologist.

Peeping Tom remains an unsettling, disturbing, and unforgettable psychological and visual exploration into the sadistic obsession with fear experienced by a psychopathic killer.