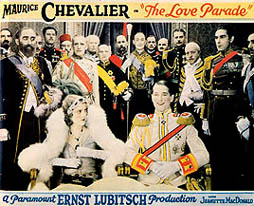 A Hit Parade of The Love Parade

1. Ernst Lubitsch, 1892–1947. “Who’s Lubitsch?” asks director John L. Sullivan (Joel McCrea) in Sullivan’s Travels (1941), thereby betraying his lack of true film culture. Lubitsch was already, by the time of The Love Parade, a world-renowned maker of comedies. The air of European sophistication he brought excused the sly innuendo, sometimes bordering on vulgarity, that characterised his work, and made him Hollywood’s reigning champion at slipping things past the censors.

In Germany, Lubitsch made his name first as a comic actor, a sort of Berlin Jewish Charlie Chaplin, then as a director of lavish costume romances. The irreverent comedy and elegant settings found in many of his German works would resurface in many of his successful Hollywood silent films, notably The Student Prince in Old Heidelberg (1927).

The Love Parade is Lubitsch’s first sound film, his first musical, in fact THE first musical we would recognise as such. Here, the first onscreen dialogue that’s not sung is delivered straight to camera – “She’s very jealous” – intimating that fourth walls are made to be broken. Lubitsch, who understood that each film requires its own pretence of reality, knew in this case that the pretence need only be paper-thin.

2. Maurice Chevalier. A blue-collar hero of the boulevards, is reinvented in The Love Parade as a suave and sophisticated military man more interested in campaigns of the bedroom than the battlefield. Though Chevalier doubted his ability to pull off this transformation, Lubitsch flattered him into thinking it worth a try, and the image stuck. Chevalier would reprise this impersonation in several more musicals, including Lubitsch’s finest operetta-film, The Merry Widow (1934). Only in Rouben Mamoulian’s dazzling and sophisticated Love Me Tonight (1932), did he resurrect a version of his Parisian working stiff persona.

3. Jeanette MacDonald. Though I confess to a low tolerance for sopranos, I can take MacDonald (she wouldn’t let her director call her Mac) in homeopathic doses. Lubitsch, a great manipulator of star images, does everything he can to make her more palatable: he stresses her sexy figure, makes fun of her propriety, and pits her against the incorrigible Chevalier, the ultimate weapon in the battle against starchiness.

4. Lupino Lane. I’m not sure what to make of this guy. A star of the English music hall, he was the kind of theatrical success Hollywood needed to look to at the dawn of the talkies. But his cheeky-chappie mannerisms grate slightly and the construction of his face makes me unexplainably angry. I grit my teeth and bear him, telepathically willing him to get out the way so we can enjoy the backdrops. UNTIL he dances. His show-stopping, acrobatic and very eccentric dancing, with the equally pliable and vigorous Lillian Roth, creates an exact template for screen dancing: immense skill and preparation marshalled to create the impression of spontaneous emotional expression in movement.

5. The Love Parade. Combining the Ruritanian settings and aristocratic glamour of operetta with the lightness of revue, the film takes musical cinema out of the Broadway theatres and into a romanticised vision of the world. It also dips a foot into the still-brewing waters of screwball comedy, with its battle-of-the-sexes storyline. Rakish army officer Maurice weds dignified and independent queen Jeanette, and finds the job of Prince Consort unfulfilling, indeed castrating. In the film’s most daring number, he laments “But Nobody’s Using it Now,” perhaps the only time in musical history the leading man has been permitted to sing a tender love song (basically) about his own penis. And lubricious Lubitsch slips this, and much else, past those policing the nation’s screens, using the power of suggestion so that he could always blame any perceived salaciousness on the censors’ own dirty minds.

Modern audiences might wish the film a little swifter (but give credit to the makers for all-but-overcoming the lumbering hardware of the early talkie period), and the gender warfare is addressed from rather too masculine a prejudice to fully please today, but the comedy still – magically – shines. It leaps nimbly from adultery (later a heartbroken cuckold himself, Lubitsch never could resist making fun of the cheated), to suicide attempts and constitutional crises, without ever confusing satire with cruelty. There’s no need to time warp your sensibilities here – this stuff is just FUNNY. Watching The Love Parade isn’t some feat of cine-archaeology, it’s an immediate and engaging pleasure, and a good laugh.

Every time Lubitsch scored a hit like this (and he virtually reinvented screen comedy every five years or so), critics and audiences thought he had taken the form as far as it could go, but the best was always yet to come. In future decades, the little cigar-chomping Berliner would give the world: an amoral but loveable comic masterpiece, Trouble in Paradise (1932); romantic comedy plus political satire in Ninotchka (1939); black comedy and political satire crossed with farce and screwball, To Be or not To Be (1942); and the sublime Heaven can Wait (1943) which is on one hand a dying man’s farewell to life and cinema, and on the other a celebration of love, the twinkling eye, and the transcendent power of feminine beauty.