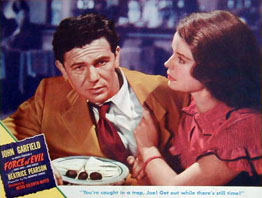 Beyond aesthetic or formal value, a major work of art identifies itself through themes able to resonate long after their initial appearance. For example, Mark Twain’s The Adventures of Huckleberry Finn (1885) remains a literary milestone not only for its freewheeling plot, revolutionary use of narration, and subversive humor, but also because its ideas about what it means to be an “American”, particularly regarding race, continue to hold true.  Abraham Polonsky’s Force of Evil represents a similarly resonant cinematic achievement. At once, a gripping melodrama, a prototypical example of film noir, and an expressionistic moral fable, the film also offers “one of the fiercest dissections of laissez faire capitalism ever to come out of Hollywood” (1). In the wake of recent corporate scandals (such as Enron), presidential election controversies (Bush vs. Gore in 2000), and a war launched under dubious pretenses (Iraq), Force of Evil’s central theme – what is the meaning of success in America? – is perhaps more compelling than ever.

Based on Ira Wolfert’s novel Tucker’s People, Force of Evil details attorney Joe Morse’s (John Garfield) attempt to convert New York City’s daily “numbers racket” into a legal lottery.  Working for gangster Ben Tucker (Roy Roberts), Joe plots to ensure “776” as the winning number on July 4th (4 July 1776 being Independence Day in the United States), knowing that superstitious working class people will bet on it. When the number hits, Joe expects every “bank” to ask Tucker to help cover their losses, thereby allowing Tucker to assume control of the entire operation. Unfortunately, Joe’s brother Leo (Thomas Gomez) manages one such bank and rejects Joe’s attempts to get him out in time. Orphaned after their parents’ death, Leo sacrificed his own future so that Joe could attend law school, generating resentment and jealousy between the brothers. Joe’s struggle to divide loyalties between Tucker, Leo and Doris (Beatrice Pearson), Leo’s assistant, comprise the heart of the melodrama and lead to a tragic, if ultimately, redemptive conclusion.

Son of a Jewish pharmacist, Polonsky grew up in New York, graduated from City College and Columbia Law School, and developed a strong political conscience early in life. Speaking about the Great Depression, Polonsky said, “I came of age in a country that had come to a standstill, with fifty million unemployed and the banks closed” (2).  Although he encountered early success writing for radio in the late 1930s (including for Orson Welles’ Mercury Theatre of the Air), he decided to work as the educational director and newspaper editor of a regional CIO union north of New York City. An unapologetic Marxist, Polonsky’s commitment to left-wing values never wavered and he continued as an educator throughout his life. Although he was hired as a screenwriter by Paramount in 1945, his first big success came with his screenplay for Body and Soul (Robert Rossen, 1947), produced independently by Enterprise Productions. The film garnered strong reviews, even stronger box office, and producer and star Garfield encouraged Polonsky to direct his own film as a result. Polonsky wrote Force of Evil as a vehicle for Garfield and the collaboration remained the last major work for either artist before they were blacklisted in 1951. Garfield died of a heart attack one year later (most agree that stress related to the HUAC hearings and the ensuing blacklist directly contributed to his death), while Polonsky would not direct another movie for 21 years (3).

A quarter of a century before The Godfather (Francis Ford Coppola, 1972), Force of Evil exposes the striking similarities between American business and organised crime. Early in the film, Joe predicts that the new lottery will become “legal, respectable and very profitable” in ways similar to horse racing or lotteries in Cuba. Consequently, defending his plan to force small banks into Tucker’s grip, Joe explains, “We’re normal financiers!” Moreover, Joe and Tucker consistently refer to their new venture as “the corporation” and others quickly accept the term. When Bauer (Howland Chamberlin) arrives late for work on the first day following the takeover, Leo instructs him, “You’re working for a big corporation, not a little man”. Similarly, when Bauer rejects a competitor’s proposition by calling him a gangster, the man surprisingly replies, “What do you mean gangsters? It’s business.”

Throughout the film, Leo weakly attempts to draw a distinction between his small numbers operation and that of Tucker’s mob. He tells Joe, “I’m an honest man here. Not a gangster with that gangster Tucker… I do my business honest and respectable.” Rejecting Tucker’s strong arm tactics, he employs a dependent band of misfits – the orphaned Doris, the meek accountant Bauer, a childlike cab driver who suffers from horrendous claustrophobia – perhaps unconsciously recognising crime as the only survival method available in the slums. When Joe pleads with Leo to leave before the takeover, Leo replies, “I’m not that big of a crook”, promising to deliver on placed bets. Harshly, Joe points out the hypocrisy of Leo’s “moral superiority” and reminds him that his bank operates on the “nickels and dimes and pennies of every sucker”. As Danny Peary notes, “Joe and Leo are equally part of the pervading corruption; and the longer they stay in, constantly moving up the wobbly ladder of ‘success’, the closer they come to self-destruction” (4). Thomas Gomez’s brilliantly manic performance physically reflects the schizophrenic nature of his frustration. He alternately rants, sweats, and screams as he feels his life slowly spin out of control. When Joe suggests that “money has no moral opinions”, Leo reflects, “I find I have, Joe. I find I have.” Polonsky illustrates that morality and success remain mutually exclusive in the current economic system and Leo’s inability to reconcile his profession with his morality leads to betrayal, neuroses, and death. In Martin Scorsese’s description, “It’s not just the individual who’s corrupted, but the entire system” (5).

Using numerous biblical references, Polonsky creates a contemporary moral fable, eschewing reality for a symbolic discourse on preserving moral integrity. The film begins with a bird’s-eye view of Wall Street, prominently featuring Trinity Church, immediately identifying money as the new religion. When Joe argues with Leo about the lottery scheme he pleads, “I’m paying you back, Leo. I’ll make you rich with an office on Wall Street in the clouds.” For Polonsky’s characters, heaven now exists in New York’s financial district. Of course, the brothers’ relationship mirrors that of Cain and Abel, directly quoted when Leo complains to Joe, “All that Cain did to Abel was kill him”. Interestingly, though, while the brothers fight heatedly, they also defend each other against outsiders. For example, when Leo suspects that Bauer may become an informer, he screams, “I’ll kill you with my own hands rather than let you put the mark of Cain on my brother”. Routinely, characters speak about moral quandaries in terms of good and evil. Disappointed with Doris’ decision to leave him, Leo says, “Black sheep like to make everybody else look black”. Meanwhile, the film’s celebrated “ruby” sequence replays the temptation of Eve and the apple as Joe outlines his philosophy of life,

To go to great expense for something you want – that’s natural. To reach out and take it – that’s human, that’s natural. But to get pleasure from not taking, by cheating yourself deliberately, like my brother did today, from not getting, not taking – don’t you see what a black thing that is for a man to do?

Garfield performs the speech magnificently, prompting Andrew Dickos to describe him as “the most biblically angry of all the young men of the screen” (6). Fortunately, for Joe, Doris resists the desire for wealth at all costs – without giving up on Joe’s potential for salvation.

With the film’s title, Polonsky describes the greed at the heart of American capitalistic culture. In his view, while wealth and power comprise success in America, they also contribute to spiritual and physical death. In fact, despite film noir’s reputation as a fatalistic genre, no other film noir (or any other movie, for that matter) comes close to matching the number of death references offered by Force of Evil: in the film’s opening moments Joe proclaims, “If you don’t get killed, it’s a lucky day for anybody”; when Joe first contacts Leo regarding the lottery scheme, Leo angrily tells him, “Come back around when I’m dead”; meeting Doris for the first time, Joe explains, “You can’t tell about life until you’re all through living it”; defending Leo’s erratic behavior, Joe tells Tucker, “Just because I’m killing myself over that dumb brother of mine doesn’t mean I’m ready to die for anyone else”. Most poignantly, Leo ruminates about the fleeting nature of life itself just before his murder, “I’m a man with heart trouble. I die almost everyday myself. That’s the way I live. Sometimes you’re dying while you’re breathing.” A pervasive atmosphere of death slowly grows over the course of the film, creating the desperate sense that while everyone strives for success, no-one wins. Salvation, instead, comes through personal responsibility and a decision to change the system. As Polonsky told Sherman and Rubin, “Having reached the absolute moral bottom of commitment, there’s nothing left to do but commit yourself. There’s no longer a problem of identity when you have no identity left at all. So, in your next step, you must become something.” (7) In turn, Joe must create his own moral universe and follow Doris’ lead toward a vision of people over profit.

Produced at a time when film noir began to incorporate documentary-style techniques in films like Call Northside 777 (Henry Hathaway, 1948) and The Naked City (Jules Dassin, 1948), Force of Evil remains proudly expressionistic. Its abstract compositions, extremely high and low angles, and single-source lighting (inspired by Edward Hopper’s paintings), convey a claustrophobic world of difficult choices. Like many of Hitchcock’s films, dangerous stairwells abound and typically signify an impending moral struggle: Joe and Tucker slowly walking down a large spiral staircase as Tucker plants seeds of mistrust; the tall, steep stairwell Joe must climb to visit his brother’s slum apartment; Bauer’s fruitless escape attempt up a stairwell during a police raid; Joe’s lonely walk down stairs and across Wall Street after he discovers his office has been bugged. Polonsky saves the largest staircase for last. Learning that Leo has been murdered and left near rocks along the Hudson River, Joe rushes to the base of the George Washington Bridge. “I just kept going down and down”, says Joe as he traverses seemingly endless stairs. “It felt like I was going down to the bottom of the world, to find my brother.” Echoed by David Raksin’s evocative score, Joe reaches Leo’s body, accepts his culpability and begins his physical and spiritual regeneration with Doris at his side. It’s a remarkable journey, particularly for an 80-minute, low-budget, crime picture. However, using “highly stylized conventions… to create critical social messages”, Polonsky replaces Huckleberry Finn’s river with city streets to update America’s struggle for identity (8). 57 years later, in the age of corporate globalisation, its lessons remain more important than ever. As Jean-Luc Godard famously said of the equally brief, yet profound Au Hasard Balthazar (Robert Bresson, 1966), “it’s the world in an hour and a half”.