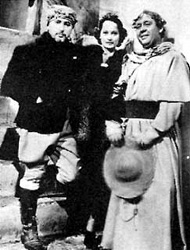 In February 1937, an extraordinary assemblage of film luminaries converged on Denham Studios to start production on a brilliant but ill-fated cinematic translation of Robert Graves’ two celebrated novels, I, Claudius and Claudius the God. Elaborate sets arose in the leafy London suburb for the drama of the volatile and psychotic Caligula’s accession to power, viewed by the historian and scholar Claudius who must pose as a groveling half-wit until his chance unexpectedly arrives to rule the Roman Empire.

When production commenced, producer Alexander Korda was at the peak of his success in challenging the hegemony of Hollywood with international hits like The Scarlet Pimpernel (Harold Young, 1934) and The Ghost Goes West (René Clair, 1936). To portray Claudius he was able to use Charles Laughton, Britain’s first international star, and the recent winner of Hollywood’s Oscar for Best Actor, in the Korda-directed The Private Life of Henry VIII (1933). After playing Captain Bligh in Mutiny On the Bounty (Frank Lloyd, 1935) he was also a household name on both sides of the Atlantic.

To play the imaginatively cruel Caligula, Korda recruited Emlyn Williams, still tasting his triumph as both author and star of Night Must Fall on stage in London and New York. As the recklessly sensual empress Messalina, Korda cast his most glamorous star – and object of his affection, whom he would marry two years later – Merle Oberon, fresh from a great personal success in Hollywood in Sidney Franklin’s The Dark Angel (1935).

On shakier career ground was the imperious Josef von Sternberg (1), famous for inventing the gangster thriller with Underworld (1927) and then guiding Marlene Dietrich through six masterworks, starting with The Blue Angel (1930). Marking time after his decisive break with Dietrich and the failure of their final collaboration, The Devil is a Woman (1935), he had moved to cost-conscious Columbia Pictures, where this most self-conscious of auteurs found himself working with reduced budgets on a thin, reductive version of Dostoevsky’s Crime and Punishment (1936), and an inventive but little-seen papier-mâché operetta, The King Steps Out (1937).

Still at the height of his powers, and unrivalled in delineating the negotiations between sex and power as well as adept at revealing the hypocrisies hidden beneath the shield of respectability, Sternberg certainly leapt at this chance for both artistic and commercial success. He also saw it as an opportunity to explore the ancient imperial court of Rome, a realm even more depraved than Catherine the Great’s, which he had memorably exposed in The Scarlet Empress (1934). While romantic in its visual extravagance, his resolutely unsentimental style carried a modernist irony and mordant edge, making it uniquely suited to the source material which looked unblinkingly into the pagan heart of Roman society.

For one turbulent month these outsized personalities struggled – seemingly more with each other than with the material – as rumours flew about the clash of personalities, epic cost overruns, and Sternberg’s autocratic demands. Filming finally halted after Merle Oberon’s near-fatal auto accident precipitated the abandonment of the production.

What happened is the subject of the 1965 documentary The Epic that Never Was, which occupies an under-populated niche as a record of an unfinished and abandoned production (one of its few counterparts being Lost in La Mancha, the 2002 autopsy of Terry Gilliam’s attempt to film Don Quixote). As such, Duncalf’s film asserts an archivist’s belief in preserving and exhibiting valuable if unrealised work, while also providing an unwitting model, from forty years ago, for today’s DVD extras.

However, the “Epic” of the title must be termed a misnomer as the film never aspired to expansive vistas or grand spectacle such as battle scenes (although the narrative itself was epic in both its historical and filmic reach). Equally, the “Never Was” component actually means “Never Finished”, since the documentary rescues over 27 minutes of footage, including a half-dozen entire sequences personally assembled and crafted by Sternberg, who edited on Sundays when no shooting was scheduled.

While the raw rushes shown initially have only clinical interest (with the director shouting instructions from off camera), the edited material unexpectedly springs to life on the screen, giving a substantial taste of what the flamboyant production promised. If the carefully nuanced lighting in certain close-ups clashes with the less studied medium and long shots, the director unequivocally succeeds in eroticising Merle Oberon by swathing her in diaphanous garments and having her stride with impudence through his sculpted lighting.

As Laughton and Korda were dead by the time this film was made (and now all have passed on), the history of I, Claudius lies in the hands of the survivors, notably Sternberg, Oberon, Williams, Flora Robson, and author Robert Graves. For our era of exhaustive commentaries by directors and other participants, this film seems too circumscribed (its length presumably dictated by its television origins) and too well-behaved, seemingly conscious of its debt to its interviewees, and insufficiently critical to probe deeply beneath the surface civilities. To be sure, the irascible and difficult Sternberg would be a poor choice for such probing, but only Emlyn Williams manages to suggest a significant subtext.

The sole criticism of Sternberg comes from waspish designer John Armstrong, unaccountably surprised that a Hollywood maestro would violate scrupulous authenticity by ordering the number of vestal virgins multiplied tenfold and by demanding ahistorical transparent veils for costumes. Among the rumours that Duncalf neither repeats nor refutes is the contemporary suspicion that Oberon’s accident was staged to win an £80,000 settlement from Prudential Insurance, thus minimising the financial loss brought about by the production’s closing. Could this be one of the changes to the documentary reportedly demanded by Oberon? And how is it that, as Duncalf tells us at the start, all the production’s records were destroyed or lost?

Purporting to present “the inside story”, the writer-director also tactfully refrains from disclosing that Sternberg was hired because Dietrich agreed to waive a $100,000 payment owed her by Korda if the producer would replace the original choice for director – William Cameron Menzies, whose Things to Come (1936) had been well-received – with her mentor. Lips are equally sealed about Sternberg’s sojourn in Charing Cross Psychiatric Unit immediately after filming had ceased (2).

The film allows Sternberg to lay the blame for the project’s implosion squarely on Laughton’s shoulders, a theme developed in Sternberg’s reliably eccentric autobiography, Fun in a Chinese Laundry, originally published in 1965, the same year as The Epic that Never Was‘ production. Conceding a backhanded compliment to Laughton (“when he was not in front of the camera he seemed no more abnormal than any other actor”) (3), Sternberg accuses him of a masochism that required the pitiless jeering and rude kicks of the film’s extras to stimulate his performance.

As evidence for these claims, Duncalf shows take after take in which Laughton seems unable to decide on a reading. In trying to accommodate the actor’s groping toward a grasp of each scene, Sternberg wrote that

I alerted his dismayed fellow players to disregard all stagecraft and follow him if need be to the ceiling. Moreover, no one but the crew, who followed my slightest signal, knew any longer when we were rehearsing and when we were actually filming, for our Claudius had a way of disintegrating before our very eyes as soon as he suspected that he was being recorded. (4)

But we also see a later sequence, beautifully played by Laughton, where for the first time Claudius heroically asserts his moral authority in public by placing demands on the Senate and the Roman Army.

Not surprisingly, Laughton’s biographer and champion (and fellow actor) Simon Callow credits the director’s insensitivity for the star’s torments of self-consciousness:

[Laughton] was thrown into a state of paralysis. Temperamentally incapable of standing up to the harsh, dictatorial style of von Sternberg, he adopted a defensive posture [which] drove von Sternberg into a frenzy; it was a mockery of him and his methods; above all, it was an abrogation of his authority, as he had, finally, to admit by calling in the producer. (5)

If Duncalf’s script stays out of the dark corners of this story, the surviving sequences that are included do suggest that an uncommonly ambitious work of both luminous beauty and ruthless psychology was underway. Dirk Bogarde concludes his narration by wondering who else would make another attempt at filming I, Claudius, raising the final irony that scarcely a decade later, in 1976, the BBC itself would produce its memorably intense and flawlessly played television version. This 13-episode production proved to be an enduring hit and a definitive rendition of the material, but no one would claim for it the visual splendour or seductive rhythms that Sternberg created. If “the gods had written the finish” (6) of Korda’s project, the indisputable yet irreconcilable talents of both Sternberg and Laughton still linger within the confines of this documentary.