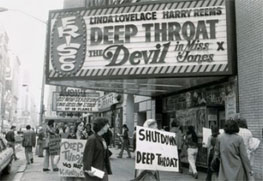 The film’s premise of a woman who discovers that her clitoris is situated at the back of her throat in hindsight provided a twisted argumentative strength for opposite sites in a debate. Whether or not you would think that pornography is degrading or not, you could find your rhetoric partner in the visuals of Deep Throat (Gerard Damiano). A self-proclaimed feminist, for instance, could chose in those days to be ‘contra’, as the movie obviously made Linda Lovelace kneel before every male figure, or ‘pro’, as the film at least seemed to care about the orgasmic pleasure of women (even if it is hard to call it a realistic one). In short, it was a visual inventiveness that helped make Deep Throat the cult and cultural phenomenon that marked its place in popular history and language.

In February 2005, a sexually explicit documentary, whose aim is to show how Deep Throat could have brought about this change in the public’s attitude toward recorded sex acts, premiered at the Sundance Film Festival. Its dodgy title (Inside Deep Throat) and poster (reminiscent of the Rolling Stones’ lips iconography) aside, the documentary supposedly represents different perspectives on what it nostalgically calls a revolution. Although more darker aspects of the film’s history are not omitted (including Mafia interference and the disastrous biography of Lovelace), the overall attitude is one of enthrallment over Deep Throat, as the film is regarded a peak of independent æsthetic filmmaking. The documentary’s producer, Brian Grazer, said to The New York Times, “The marketing of anything today worth marketing involves sex.” If we may believe Inside Deep Throat, the original Deep Throat was released in a time when we were not yet sexually anaesthetised and porn was made with the best of intentions.

Grazer is also the man who brought us A Beautiful Mind (Ron Howard, 2001) and Apollo 13 (Howard, 1995), a man who himself knows how to sell. Inside Deep Throat gives the impression that Deep Throat weighs in the balance between cult film and cultural phenomenon more toward the second. This idea could, however, be unravelled as a marketing tool to help Inside Deep Throat profit from the success of its subject. Like many documentaries, Inside Deep Throat is eager to support its subject rather than to stay on neutral ground – but this one hopes that its subject will return the support.

A feminist view is somewhat absent from this production. Can we be persuaded to believe that any such negligence is the price to pay for the overabundance of themes and voices in Inside Deep Throat? With such a diverse range of content, it is understandable that the documentary leaves certain elements underdeveloped. And the feminist side does share in the blame because not many (former) feminists were eager to participate. But what could be the reason for this hesitance? Could it be that feminism had a hangover regarding the issue ‘Deep Throat’? Or was it merely because they anticipated a mere entertaining documentary? But to think of the tone of Inside Deep Throat as a Hollywood effect, rather than an essential part of the rise of pornographic features, is to be blind for the more intimate connection between Hollywood-narrative and the rise of porn industry. What has criticism made of Deep Throat‘s success?

Criticism doesn’t seem able to provide a conclusive argument on why Deep Throat was such a success. For one, it is not an especially good movie. There have been better, just to mention Behind the Green Door (Mitchell Brothers, 1972) and The Devil in Miss Jones (Damiano, 1973). Even at its most basic level, Deep Throat lacks from a narrative inconsistency, as we can see Lovelace rubbing herself during intercourse when one is supposed to believe that ‘it’ is not where it normally should be? And how about ethical criticism, can that enlighten?

Deep Throat came out during a crossroad in feminist evolution. Before the 1970s, there was a standard “against pornography” comment. All energy was put into judicial censoring action, finding allies within the Right – thereby showing a vehement conservatism within feminism. But this idea about pornography, based on old 10-minutes loops, weakened when features began to appear. Linda Williams, forerunner of the porn-study writers, said that Deep Throat was special because now you had this feature that managed to integrate a variety of sexual numbers into a narrative that was shown in a legitimate theatre. Any serious comment on porn movies had to take the narrativity of the genre into consideration. For instance, what the business names the ‘money shot’ (visible ejaculation) is not a realistic element but a narrative convention to enhance the believability of what happens on the screen.

So a second feminist wave renounced a simple judicial approach, no longer identified pornography with two-dimensional sex, and instead increased rhetorical studies in this field. Once you believe that pornography is the representation and staging of an erotic scene, rather than sex itself, you can think it possible to control those elements that construct sexual representation and presuppositions about sexuality. The result was ambitious and ambiguous: there could be “good pornography” – that is, pornography that could let people think about what they believe sex entails and, by inspiring the imagination to a change in perspective, one could change real male-female relations. Whether or not Deep Throat had such a potential remains to be decided.

Still, Deep Throat does appear to indicate a certain functionality of sex. Orgies are intended to find out why Lovelace’s character not find her orgasm through intercourse. And after her diagnosis and cure, her escapades are instrumentally used as therapeutic means for others who have different sexual issues. But to solely see this in the light of the possibility of representational politics, as a means to change thoughts about sexuality, as the second feminist wave tried to study and what the third is trying to achieve, is to miss the story of what happened to Deep Throat in the years after: the becoming of Cult.