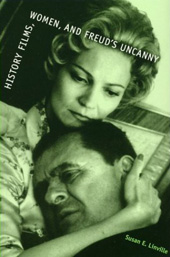 In her second monograph, Susan E. Linville, the author of Feminism, Film, Fascism: Women’s Auto/Biographical Film in Postwar Germany (1), takes on a timely topic – the obsession of recent Hollywood cinema with representing momentous historical events of the second half of the twentieth century. The subjects of the films she discusses range from World War II and the American presidency during the Cold War and the Vietnam War, to the Operation Desert Storm, contemporary techno-warfare, and globalisation. As Linville acknowledges in her introduction, the topic of her study has not been altogether ignored until now; scholars like Robert A. Rosenstone, Robert Burgoyne and Vivian Sobchack have offered illuminating accounts of Hollywood’s fascination with historical material (2). Linville’s objective then is not to draw attention to a critically neglected group of cinematic texts but rather to shed light on what the aforementioned scholars have played down in their analyses. She expands upon the familiar debate concerning the erosion of boundaries between “fact” and fiction, between History, private memory, public nostalgia and commodified fantasy in the historical film genre. Linville’s primary concern is the interplay of the erosion and affirmation of gendered and other social identities in filmic texts which, at least at first glance, promote a nostalgic, monolithic and oppressive – that is, Eurocentric, patrilineal and heteronormative – ideal of nation.

In order to grasp the ambiguity of these eroded, displaced or erased subjects, to make visible their structural absence, or to decipher their symbolic incorporation (for instance, the derealising use of women as metaphors for home or icons of nation), Linville employs the concept of the uncanny. As the author notes, ever since Freud published his landmark essay on the topic, (3) the uncanny has “served nostalgic, masculinist agendas”; and yet, the concept has also “mobilized feminist–friendly cultural critique” such as her own (30). Taking on board feminist critique of Freud’s theory and the recent reappraisal of the uncanny in cultural studies, Linville develops a sound methodological framework founded upon the uncanny as a politically charged aesthetic category, a “destabilizing third term”, facilitating deconstruction of traditional binarisms. Although the title of her book might seem to suggest otherwise, Linville demonstrates that the relevance and the disruptive effect of the uncanny are not limited to gender. The concept is equally effective, subversive, even liberating, when historicised “within the frameworks of the ethnic, racial, and sexual dynamics of particular nations, cultures, and histories, and especially in relation to postcolonialism, migratory labor, and globalization” (18), as well as within the domain of aesthetics, where it disrupts the gendered dichotomy of the beautiful versus the sublime.

Subversion of the beautiful/sublime binary is of considerable concern to Linville’s project for, as she observes, the aesthetics of the historical film – especially those of its subgenre, the combat film – have conventionally been associated with, and reduced to, a Western masculinist notion of the sublime. Linville shows, however, that the war film in particular and the historical film in general are far from devoid of uncanniness. In a compelling analysis of a selection of 1990s American films – A Midnight Clear (Keith Gordon, 1991), Saving Private Ryan (Steven Spielberg, 1998), The Thin Red Line (Terrence Malick, 1998), Nixon (Oliver Stone, 1995), Courage Under Fire (Edward Zwick, 1996), Lone Star (John Sayles, 1996), and Limbo (John Sayles, 1999) – Linville brings to light the unheimlich moments in these texts and thus identifies points of rupture and signs of textual resistance not only to Hollywood aesthetic standards but also, more importantly, to hegemonic accounts of the past. Her fascinating, audacious interpretation of the films is cemented with a detailed outline of those facets of historical events that are often swept under the carpet in the sanctioned versions of the past, yet they uncannily return in various guises, including the cinematic texts under discussion. 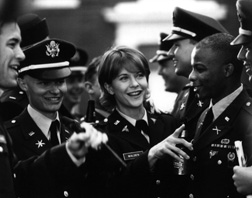 Chapter Three, one of the strongest sections in Linville’s book, is emblematic in this respect. The title of the previously published chapter, (4) “The Mother of All Battles”, is a provocative appropriation of Saddam Hussein’s infamous description of the Gulf War. Yet, in her discussion of the scandalous trajectory of gender and ethnic integration in the US military after the Vietnam War and during the Gulf War and its disturbingly placatory representation in Courage Under Fire, Linville never succumbs to sensationalist and assertive but ultimately vacuous rhetorics. Her astute, critical, but also generous reading of Zwick’s feature is sophisticated, engaging and thoroughly substantiated. Linville demonstrates that Courage Under Fire, which she considers one of the most complex and compelling Hollywood representations of the Operation Desert Storm, “goes a long way toward valorizing the ethnic, racial, and gender diversity that is a goal of the 1990s U.S. Army”; however, Zwick’s film is also “defined by images, elisions, and subtexts that point equivocally to other historical moments and cultural vantage points that erode and destabilize its overtly forward-looking vision” (92–3). Linville details these historical contexts and controversies – including the sexual harassment scandals accompanying the introduction of gender and ethnic integration in the US army, the economic motivation of the US for entering the Persian Gulf conflict, and the anti-Arab animosities – to show that Courage Under Fire glosses over these troubling issues; however, they uncannily return to disturb the film’s idealised vision of model military service.

With a routine gesture of a well-versed rhetor, Linville describes her project as a preliminary rather than exhaustive exploration of the contemporary role of the uncanny. She expresses hope that her book will inspire further exploration of the phenomenon, and she insists on the necessity of meticulous historicisation in any such endeavour. Perhaps the most important lesson to be learned from Freud, Linville writes, is “the importance of historical context to a theory, such as his, that defines itself in universal rather than historically or politically specific terms” (22), but was, of course, written in the shadow of the First World War. Almost a century later, the uncanny yet again “exists on a distinct and heightened historical plane”, pervading not only the combat film as the major form of Hollywood history film at the moment but also our culture at large, thanks to the rapidly evolving technologies of reproduction “which complement the destabilization of identities that globalization, postcolonialist dynamics, and population and labor shifts have ushered in” (22).

I fully agree with this contention; Linville’s assessment of her own contribution, however, seems too modest to me. History Films, Women, and Freud’s Uncanny offers much more than a critique of Hollywood’s reduction of women to uncanny metaphors for hearth and nation, or figures of ambivalence or absence. The book is a remarkable discussion of contemporary mainstream cinema’s ambivalent, progressive and at the same time exploitative employment of disenfranchised subjects “whose functions are instrumental in recovering and reimagining repressed history […] and in debunking nostalgic notions of nation” (34). Interspersed with Shakespearean analogies and mythological and biblical references, which economically flesh out Hollywood’s cultural and ideological heritage, Linville’s book is a timely, erudite yet perfectly accessible analysis of the history film genre, whose significance in our troubled climate of globalisation, neo-imperialism and the destabilisation of national identity should not be underestimated.