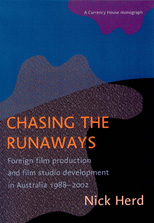 Is domestic production being “swamped” by international production? Where does creative control lie? Which sectors of the industry and the economy more broadly benefit from this production, and which are missing out? What are the ramifications for traditional cultural policy support structures designed to facilitate local voice, vision and expression? Why is so much public money being used to subsidise major international film, television and game production? And most provocatively, perhaps, to quote the back cover, “Are we surrendering control of our industry?” Nick Herd’s concise book was prompted by a series of questions about the phenomenon and effects of international production. In this useful but very drily written history of the transformation of screen production in Australia since the opening of the Warner Roadshow Studios on the Gold Coast in 1988, Herd provides some answers to these questions, although his predisposition to view international production as a bad object with no inherent cultural value and a threat to “Australian” production clouds his objectivity and prevents him fully exploring this kaleidoscopic issue.

International screen production is a slippery object with many names – foreign, footloose, fee-for-service, runaway (1). This last term in particular is favoured by those anxious about its effects on employment, on cultural policy and on government thinking about the meaning, value and resonance of film, television and game production. It is a powerful, evocative term, but also sometimes misleading in the context of screen production; it implies that all such production has a natural home (usually considered to be the US), but that it has “run away” to other countries to take advantage of cheaper labour, currency differentials, tax incentives and other forms of economic assistance which are often funded from the public purse. It is clearly true that a substantial proportion of international production is itinerant; this fact and the economic benefits which are perceived to flow from such production have convinced governments at national and local levels around the world to compete vigorously in what Herd calls an “incentives game” to attract and retain international production. But much of this production has no natural home – if producers are not drawn to particular places because of the availability of specific personnel, locations or facilities, they will travel all over the world to wherever they can get the best deal. This is the reason why several US states including California have developed production incentives of their own. In this light, Los Angeles is just another (albeit very privileged) possible production location and not its “natural” home.

As a number of recent reports have shown (2), the volume of international production work flowing around the world has increased substantially in recent years. According to AFC figures, this international production is fast approaching 50% of total production spend in Australia. Where has it come from? Herd cuts a swathe through the complex historical, cultural trends and industrial, technological and political forces that have driven this boom to locate its recent origins in the growth in platforms and demand for audiovisual content in the United States, and the inexorable rise in budgets for American film and television production. In taking such a “global Hollywood” view, Herd stands alongside Miller et al. (3) and the influential but flawed Monitor Group report for the Directors’ Guild of America in focusing on what has driven production from America to the rest of the world. But this view ignores the facts that demand and budgets are growing around the world and that international partnerships which bypass America are not only common in film, television and game production, but increasing. It also diminishes the attraction of particular places as production locations due to the availability of infrastructure, personnel or a certain type of natural environment.

Rather than a “broadcast” model of the spread of this production, I believe that it is more useful to understand the international production system in network terms in which connections between locations, producers and audiences are multiple, complex, ever-changing and multi-directional. This view acknowledges that while America is still the home of much production and more importantly of much intellectual property, the impetus for production is not restricted to the United States. The ideas and talent behind globally successful audiovisual content can now be found in such diverse locations as New Zealand, South Korea, South Africa and the Czech Republic. Herd’s focus on America is justified by his assertion that the majority of international production activity in Australia comes from the US. But while this is clearly still the case and likely to be for some time to come, links between the Australian screen production industry and countries other than the US, and particularly in Asia, have grown substantially in recent years. To take two examples, Australians were integrally involved in the production of the first film made in Bhutan, Travellers and Magicians (Khyentse Norbu, 2003), while Animal Logic, perhaps the most successful of all Australian audiovisual companies in terms of its international work in recent years, has completed extensive visual effects work on the Chinese features Hero (Zhang Yimou, 2002) and House of Flying Daggers (Zhang, 2004). There is every reason to believe that these kinds of partnership will continue to strengthen.

Government assistance to international production is rarely justified in cultural terms, or framed by cultural policy rhetorics. As Herd notes, there are five main arguments for this kind of assistance:

• It fuels investment in physical and technological infrastructure (e.g. studios and equipment) which may stimulate further production

• It strengthens connections between the Australian industry and the global audiovisual system (x).

But Herd makes the critical point that the benefits of international production are not spread evenly within the industry, with key Australian creatives – writers, producers, directors and editors in particular – missing out for the most part on the work generated by large, incoming projects. The depressed mood of these sections of the industry has deepened in the last few months with the spectacular implosion of the multi-million dollar feature film Eucalyptus, the failure of industry lobbying on the Australia-US Free Trade Agreement, and the announcement in May that the ABC expects to produce just 20 hours of drama programming in 2005 (down from 102 hours in 2001). These are also the people who have suffered most at the hands of the Australian press, which has not missed an opportunity in the last 18 months to vilify local filmmakers over the standard and performance of their work at the box office. There are some hopeful signs for local producers – Australian animation and short films continue to win awards and acclaim at major international festivals – and ambitious and far-sighted producers are beginning to recognise the potential of interactive television, broadband internet, mobile telephony and the new generation of personal media devices, such as the Sony PlayStation Portable (PSP), for storytellers and content creators. But while the recent federal budget contained a number of measures that will increase the amount of funding and assistance available to local feature film, television and documentary producers, many view the expansion of packages of assistance to international producers and the international promotion of Australia as a production location as alarming indications that the federal government and state agencies view production in Australia as more worthwhile than Australian production per se because economic outcomes seem easier to predict and measure than cultural ones.

The reality is that international production is here to stay, and content creators and service providers of the future will need to understand its dynamics and risks in order to achieve success both in Australia and overseas. Nick Herd’s study makes an important contribution to the growing stock of knowledge about international production. It should quickly become a standard reference source on the evolution of the three major studio complexes in Australia, although it is weakened by the age of some of the statistics used (a seemingly unavoidable problem), and the fact that the industry it describes has changed substantially in the few short years since 2002.