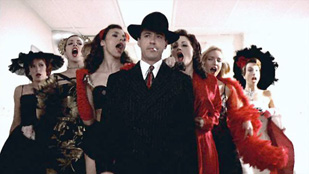 It’s a sign of the times that Keith Gordon’s The Singing Detective (2003) hasn’t been appreciated for what it is. The mainstream critical community has spoken and the film is either a) a poor Hollywood-lite imitation of a great mini-series (Dennis Potter’s and Jon Amiel’s) (1) or b) isn’t as much fun as Chicago (Rob Marshall, 2002) or Moulin Rouge (Baz Luhrmann, 2001) (2). Nowhere, to my knowledge, has it been analysed as a meaningful part of an oeuvre – specifically the oeuvre of its director, one of the most interesting voices in American film right now. A.O. Scott’s review in the New York Times (3), for instance, mentions Gordon’s name twice: once in the body of the review to identify the director and then again in the credits list. More often, the film was analysed in terms of how it relates to lead actor Robert Downey Jr.’s personal life; those parallels are interesting, but Downey is not the auteur of this film, alas.

Gordon is a former actor who appeared in a number of distinctive auteur films of the ’70s and ’80s (notably Brian De Palma’s Home Movies [1979] and Dressed To Kill [1980], Bob Fosse’s All That Jazz [1979] and John Carpenter’s Christine [1980]). Since turning to directing in 1988, he has made five features, which display a startlingly consistent vision. In the rag-tag world of genuinely independent film, Gordon has somehow been able to fashion a canon of great purity and oneness of mind. He’s resisted the impulse to do projects for the money or fame just as he’s refused to settle for being a hired hand and injecting some flavorful touches into Hollywood dreck, as Steven Soderbergh has on occasion. This makes the refusal of critics to see The Singing Detective not as a failed remake or a failed Chicago but as a successful and interesting Keith Gordon film all the more shameful.

Gordon tends to gravitate towards protagonists who are trapped: in high school (The Chocolate War [1988], his greatest film); in the senselessness of war (A Midnight Clear [1992]); in the paradoxes of patriotism (Mother Night [1996]). His mise-en-scène reflects the traps in which his characters are caught: influenced by Stanley Kubrick, he prefers symmetrical compositions and slow, formal zooms which emphasise characters existing within – rather than controlling – a given space. In The Singing Detective, Dan Dark (Robert Downey, Jr.) cannot escape his trap – not at first anyway – because the trap is essentially himself. Superficially, it’s his skin; Dark – a writer of sleazy noir fiction – is suffering from a horrible case of psoriasis, which, as the film opens, covers his entire body and makes even the tiniest movement painful. Gordon’s cinema has never been more nauseating or “clinical” in its formal perfection than it is in the scenes of Dark languishing in a hospital bed. But his problem isn’t just with his skin; as Dark’s aging hippie shrink (Mel Gibson in bald cap) comments midway through the film, diseases of the skin are inevitably seen as a sign of diseases of the soul.

Dark’s soul is surely diseased. He is Gordon’s most hateful character ever. Usually his protagonists are sympathetic for their naivete in a cruel world – or pitiable for it; Dark is neither because we have the impression that he is very much the facilitator – if not the maker – of his own unhappiness. He hates women, including the devoted wife (Robin Wright Penn) whom he suspects of treachery. Often in Gordon’s work, a female character emerges as a kind of saviour for the male protagonist; this is as true here as it has ever been, but it’s a long, hard road before this male protagonist can recognise that his wife fulfils this position. Dark’s contempt is not gender-specific, however; he seems to hate all of humanity. One would say that Dark has been embittered by his medical condition if one did not strongly suspect that total physical health would not alter his worldview.

To escape the pain and anguish of his daily existence, Dark fantasises about being the suave detective of the novels he writes. These fantasy sequences – largely musical in nature, scored to such ’50s standbys as “How Much is That Doggy In the Window” – are a major bone of contention for the critics who have dismissed The Singing Detective. Gordon himself confirmed to me that one of the most frequent questions he is asked at press junkets is how he feels making a musical on the heels of Chicago. But even to invoke Chicago – or Singin’ in the Rain (Stanley Donen, 1952) or Meet Me In St. Louis (Vincente Minnelli, 1944) or The Pirate (Vincente Minnelli, 1948) or The Young Girls of Rochefort (Jacques Demy, 1966) – in a discussion of The Singing Detective is to misunderstand utterly the basic intents of the film. The musical sequences in The Singing Detective are first and foremost fantasy sequences – imaginings of a tormented (and medicated!) mind. This lends them a fractured, dreamt quality; in several instances, reality and fantasy overlap literally as Gordon uses such devices as flyaway scenery to emphasise how Dark’s fantasies spring directly from his mind (and feature hospital staff, in addition to other “characters” inspired by people in his real life, past and present). It is the failure of many critics to recognise that this is Gordon’s intent that, I suspect, is behind many of the dismissals of the film. The Singing Detective is an admittedly poor musical, but that means about as much as saying that it’s a terrible Western; the film isn’t trying to fit any genre, but rather to remain true to the psyche of its protagonist

I’ve addressed one of the two major complaints which were lodged against Gordon’s film. The other (that the film is a Hollywood-lite imitation of a great mini-series) is predicated on an idea I find so ludicrous as to be almost unworthy of response: that a great film (or television series, as the case may be), once perfected, cannot be re-conceived or re-imagined by another artist. I find this idea ludicrous because it a priori dismisses some of the greatest films ever made. Howard Hawks’ His Girl Friday (1941) was a “remake” (in today’s lexicon) – but would anyone ever think of denigrating it on that basis? Indeed, how often is it even mentioned that The Front Page was staged previously as a film before Hawks got his hands on it (and a mere 10 years earlier at that!)? The sheer greatness of Hawks’ film makes such matters irrelevant.

Of course, it is entirely up to the spectator as to whether Gordon achieves a comparable greatness in his reimagination of The Singing Detective. But critics cannot be in a position to make a judgment one way or the other until they begin looking at the film for what it is. “What it is” first and foremost is the latest Keith Gordon film, bearing not only some of the same themes which run throughout his films, as I discuss above, but also other hallmarks of his style. The film’s jumps in time – from present day to past to Dark’s fantasy world – reflect Gordon’s interest in nonlinear storytelling (even The Chocolate War, which tells its story more or less straightforwardly from beginning to end, has interruptions in the form of dream or fantasy sequences). But it’s also more than Gordon’s film: it’s Dennis Potter’s, too, for some of the most significant changes between the mini-series and the film – notably, the inclusion of something like a positive (I won’t say “happy”) ending – are his.