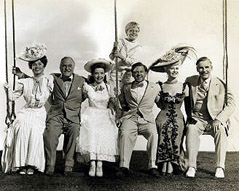 …there were only two people, in Hollywood at least, who showed any real sign of knowing what to do with the new monster medium [of sound]. They were Ernst Lubitsch and Rouben Mamoulian.

The tradition of controversial New York theatre directors literally digging up studio floors in Hollywood is a rich one. In 1936, for example, Orson Welles made his theatrical directorial debut with a “voodoo” production of Macbeth, starring an all African-American cast. Four years later, Welles was in Hollywood, and with the help of cinematographer Gregg Toland, he dug a hole in the RKO studio floor so that a camera could capture the exaggerated compositions that would define his masterpiece, Citizen Kane (1941). Welles’ place in cinematic history may be carved in stone but the great director was following a path earlier trodden by maverick director Rouben Mamoulian who, in 1926, directed an all-Negro cast in an acclaimed production of Dubose Heyward’s Porgy. Mamoulian, as early as 1922 in a London performance of Austin Page’s The Beating on the Door, had indicated his lack of affinity for naturalism on the stage. His aims, instead, were geared more towards rhythm and poetic stylisation. (2) Mamoulian’s rendition of Porgy, in turn, ended up being “a jazz of street workers, snores, brooms, rug beatings, knife sharpenings, and so on in harmonious and competing rhythms”. (3).

A disciple of Stanislavsky and a student of Vakhtangov, Mamoulian, born in Russian Georgia, was trained at the Moscow Art Theatre. He belonged to an art movement that sought to blend all facets of a production – sound, acting, lighting, motion, decor – into one “conceptual organism” (4). Mamoulian’s style would subsequently be translated and expanded into cinematic terms but not without opposition from Hollywood technical crews who – in 1929 – were concerned mainly with saving the studio time and money (5). In reaction to such a lack of co-operation on the set of Applause (1929), Mamoulian told his cameraman, George Folsey, to dig a three-foot-hole in the floor of Paramount’s East Coast studio in order to shoot a scene from below. The film crew complained that the studio had no basement; “it stands on a slab of concrete eighteen inches thick”, pointed out Folsey. Mamoulian replied, “Get electric drills. I saw Third Avenue in New York being torn up. You can tear up this thing just as easy.” (6)

Even in the world of the Hollywood musical, where the teamwork of songwriters, choreographers, and set designers was preferred to the singular creative vision of a director, studios like Paramount still realised the “potency of directorial force” (7). Therefore, unique talents such as King Vidor, Ernst Lubitsch and Josef von Sternberg were allowed a creative control that was far above the norm. Ultimately, Mamoulian was also placed in this privileged group. According to Richard Barrios, Mamoulian’s freedom in Hollywood amounted to technical and developmental carte blanche (8).

Long established as an innovator, Mamoulian himself subscribed to the view that his films were important “mainly because of their innovations and experiments” (9). Mamoulian’s self-analysis gives weight to Andrew Sarris’ view that the director’s decline into academic classicism – and his removal from directorial duties on Laura (1944), Porgy and Bess (1958), and Cleopatra (1963) – was the result of an “innovator” running “out of innovations”. (10)

A list of Mamoulian’s stylistic innovations must include, among others: Applause‘s location shooting, deployment of mobile camera techniques that broke the sound barrier and freed the camera, and use of two-channel sound recording to help liberate the soundtrack; the first use of voiceover to express inner thought in City Streets (1931); the deployment of a radically subjective camera in Dr Jekyll and Mr. Hyde (1932); and the use of the three-strip Technicolour process to psychologically and emotionally symbolic purposes in Becky Sharp (1935).

As Tom Milne has pointed out, the films Mamoulian made after Becky Sharp have been neglected. Nevertheless film scholars such as Giulo Cesare Castello and Milne himself have found reasons to rescue from post-1936 oblivion Mamoulian’s third Hollywood musical, Summer Holiday (11).

Summer Holiday was the brain-child of producer Arthur Freed, who persuaded Mamoulian to take hold of the directing reins. It is a musical adaptation of Eugene O’Neill’s play, Ah, Wilderness! Although Summer Holiday has often been compared to MGM’s 1935 film version of Ah, Wilderness!, directed by Clarence Brown and starring Lionel Barrymore and Eric Lindel, Mamoulian’s version is a transformation of O’Neill’s original into a “musical play”. In a memo to Freed, Mamoulian stated his intention that the story would be told through an integration of dialogue, song, dance, and music, where “each of these elements [takes] an organic and vital part in the telling of [the] story” (12), in contrast to the standard Hollywood musical where the story is filled out with elaborate, often overblown musical numbers.

Summer Holiday shows a period in the life of the Millers, a small-town family who embody the “spirit of America”. Mickey Rooney, who played the Millers’ youngest son, Tommy, in the 1935 version, now plays Richard, the Millers’ idealistic, pompous, dreamy-eyed teenage son. Richard is about to graduate from high-school as the story starts, intending to use his valedictory speech to express the revolutionary inanities he has acquired from a “lifetime” of recent reading. Richard’s disillusion with American social order appears to be a veil that hides his trepidations concerning adolescence, sex and social responsibility. In fact, Richard is burning with the desire to kiss his girlfriend, Muriel McComber (Gloria De Haven), who, because of her strict upbringing, shyly refuses his advances. This gives him ample reason to project his own trepidations and insecurities onto her, blaming Muriel for being afraid of her father and a society that continues to force them to repress their true desires for each other.

Summer Holiday also deals with Richard’s Uncle Sid (Frank Morgan), and his relationship with the Miller household, especially his unconsummated love for Cousin Lily (Agnes Moorehead). Sid loves Lily but he cannot give up his drinking ways in order to get his life together and ask for her hand in marriage. Nevertheless, Uncle Sid’s problem with alcohol suggests a possible outlet for Richard’s own disillusion. Later in the film, when Muriel’s father (John Alexander) discovers the suggestive literature Richard has been sending his daughter, he forces her to write to Richard and break up their relationship. This break-up sends Richard over the edge and he soon winds up in a bar with Belle (Marilyn Maxwell), a chorus girl who gets him drunk and mesmerises him with her rendition of “I Think You’re the Sweetest Kid I ever Knew.” Mamoulian uses a subjective camera in this scene to capture Richard’s drunken state; as Belle sings, she morphs from a yellow to red costume and grows more glamorous and tempting. But even within his stupor, Richard comes to realise the error of his ways. With his repentance comes the long-awaited kiss from Muriel. The musical ends with Nat unable to talk to his son about the mysteries, puzzlement and dangers of sex, his embarrassment so powerful that he agitatedly crushes a clay bust of Abraham Lincoln beyond all recognition.

Retaining the integrity of O’Neill’s stage-bound original, Mamoulian’s approach was basically to shoot Summer Holiday as a “play” with the addition of cinematic footnotes that imaginatively illustrate the ideas and atmospheric colour of O’Neill’s writing. Mamoulian uses a narrow range of colours and drops visual and aural allusions to conceptions of “Americana” throughout the film. For example, the singing of the new graduates catches the ears of a rural farmer and daughter whose pose calls Grant Wood’s famous painting American Gothic. Another sly reference occurs when the rumble of fireworks from the neighborhood’s Fourth of July celebrations brings down a picture of one of the founding fathers hanging over the Millers’ bed: “This is all your fault,” Nat tells the picture.

In his recollection of a blushful Middle America, Mamoulian represents social assimilation and conformity not as weaknesses but as strengths needed by men to overcome the liberal views which – in the film’s view – only serve to tempt them and unleash their destructive natures. But a closer viewing of Summer Holiday highlights the vulnerability of such conformity, illustrated mainly by Nat’s inability to talk about sex with his son and the way the Millers can never bring themselves to address the failings of Uncle Sid.

In Robin Wood’s largely ideological dissection of Mamoulian’s Silk Stockings (1957) – a musical remake of Ernst Lubitsch’s Ninotchka (1939) – he refers to the movie’s mise en scène and how its emphasis on individual movement alludes to the freedom of capitalism. Wood notes that in Silk Stockings, Mamoulian’s actors display a grace and freedom of physical movement as both dancer and camera “movingly express the casting off of repressive constraints” (13). But in Summer Holiday, the actors do not break into dance numbers that requires the camera to move (14) remaining faithful to Mamoulian’s idea of a “musical play” that would express O’Neill’s conception of an restrained America.

Summer Holiday took 113 days to shoot and cost $2,258,235 ($404,708 over budget); although it was considered a critical and commercial failure by Arthur Freed and the studio, Huge Fordin calls it “a milestone in the history of screen fare” for its “departure from conventional patterns” (15). Mamoulian’s restrained musical or “musical play” expands the musical genre through a cinematic reconstruction of the ideas central to O’Neill’s vision. Structurally rather than merely technically innovative, Summer Holiday can safely be included in any positive account of Mamoulian’s film career.