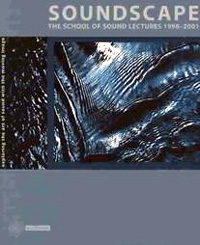 In 1998, Jerry Sider and Diane Freeman founded the School of Sound in an effort to draw scholarly and industry attention to the role of sound in audiovisual media. As Sider says in his preface to this anthology, “sound is generally undervalued in film and television, both in professional productions and where it is taught, in film schools and media courses. Technical expertise overshadows personal expression; the ‘hows’ outweigh the ‘whys’” (p. vii). Recognising an emerging interest in sound’s artistic potential, Sider and Freeman organised a symposium on the topic that first took place in April of 1998, and has since become an annual Spring event held in either London or Glasgow. During its first four years, the School of Sound attracted an impressive roster of speakers that included noted filmmakers (David Lynch, Mike Figgis, Mani Kaul, and Mike Hodges), sound designers (Walter Murch and Randy Thom), composers (Michael Nyman and Carter Burwell), avant-gardists (Peter Kubelka and the Quay Brothers), and film academics (Laura Mulvey, Peter Wollen, Ian Christie, and Michel Chion).

Soundscape, a collection of 21 essays culled from these symposia, represents but a small sampling of the fruits of Sider and Freeman’s labours. Soundscape‘s contributors include many of those listed above, and the book as a whole encompasses a wide variety of issues, such as current approaches to sound design in film, theoretical considerations of image/sound asynchrony, the role of early sound cinema in the development of culture and nationalism, the importance of sound-images to poetry, and the place of ritualised vocalising in ancient Greek tragedy. Since Sider and Freeman never organised their symposia around individual themes, the book itself is, in its editors’ words, “an eclectic collection of anecdotes, reflections, and informal theorising” (p. vii). The editors’ major criteria for inclusion was simply a desire to intermix a diverse set of “ideas and points of view colliding and combining” (p. vii) and to select those presentations that would best survive transcription to the printed page.

Not surprisingly, many of the great strengths and occasional weaknesses of Soundscape can be chalked up to its origins. The eclecticism of the collection is perhaps its chief asset with many of the essays contained here existing in explicit dialogue with one another. Indeed, since the essays are purposefully proffered as transcriptions of oral presentations, they quite frequently make reference to one another thereby perfectly capturing the symposium’s spirit of debate, deliberation, and colloquy. Moreover, the editors have wisely included a brief sampling of the questions and answers that followed each presentation, something which sadly is missing all too often from other similar collections.

One of Soundscape‘s other great strengths is its inclusion of essays by filmmakers, technicians, composers, and music supervisors. These essays comprise an insider’s perspective on the creative process and contain anecdotes that illustrate the specific challenges and problems that one encounters in developing aesthetically and culturally rich audiovisual experiences. Those who seek to evacuate authorship from film criticism would do well to read the contributions by Mike Figgis, Randy Thom, Walter Murch, and Carter Burwell, who each offer thoughtful assessments of their own work with film soundtracks. Taken in their totality, these artists suggest a myriad of ways in which subtle changes in pitch, dynamics, timbre, and key can alter and even transform the mood, tone, and feeling of a particular scene. Drawing examples from films like Leaving Las Vegas, Apocalypse Now and Blood Simple these contributors concretely demonstrate that artistic creativity is far more a matter of accident, intuition, experimentation, and problem-solving than it is of planning and design. Yet, the instinctive nature of the creative process should not negate the considerable insight these artists bring to their own work. True, the specific artistic choices of a film’s production team may not always be wholly rational; still, the contributions of these practitioners suggest that these choices are clearly knowable, demonstrable, and far from irrelevant.

Besides the essays by directors, composers, and sound designers, there are several notable essays by academics who offer new perspectives on longstanding issues and controversies in sound studies. Laura Mulvey’s essay, for example, examines the role of spoken language in the history of early sound cinema. While this period is one of the most discussed in sound studies, Mulvey takes a fresh approach to the topic that suggests that the introduction of spoken language not only resulted in the reconfiguration of the international film market, but also established linguistic communities that reinforced prevailing nationalist ideologies. Borrowing from the insights of political economy approaches, Mulvey rather neatly suggests ways in which the economic goals of film producers and the political goals of the nation-state proved to mutually reinforce one another. Likewise, Michel Chion’s contribution to Soundscape builds upon his previously published scholarship on the technological and aesthetic transformations wrought by the diffusion of Dolby technology in the 1970s. In a brief, but compelling analysis of Dolby’s effects, Chion argues that the system’s aesthetic of “fullness” and “sonic density” seemed to limit the artistic uses of silence and sonic distortion. Finally, Ian Christie’s eloquently titled “Asynchrony” attempts to open up more traditional conceptions of audiovisual “counterpoint.” Drawing on Eisenstein’s initial definition of counterpoint as a dialectic of sound and depicted action, Christie argues that one might also fruitfully expand the definition of “counterpoint” to include temporal disjunctions of image and sound, or even more simply, heterogeneous combinations of image and sound media. The latter is suggested by a brief analysis of Cecil B. Demille’s Carmen (1915), which Christie argues is experienced as a juxtaposition of mimed action on the screen and operatic performance within the auditorium.

That said, there are some other ways in which Soundscape clearly suffers from its symposia lineage. Some contributions, particularly those that relied heavily on film clips in their original incarnations, have a “you had to be there” quality. The book offers prose descriptions of several examples shown during the proceedings, but a prose description lacks the temporal and experiential element that is so vital to understanding the interactions of images and sounds. Moreover, because these essays have been transcribed from oral presentations, the text is occasionally marred by misspellings that might have been caught by a more knowledgeable proof-reader. Some of the more egregious examples of these transcription errors include renderings of SMPTE as “SEMPTE”, Josef von Sternberg as “Joseph von Sternberg”, and the Chicago band OK Go as “Okay Go”. Worse yet, in Peter Wollen’s essay, a description of Singin’ in the Rain (1952) contains two different spellings of the name “Kathy Selden” on the exact same page.

If Soundscape has an overriding theme, it is that the greatest artistic possibilities for film sound are realised in carefully planned collaborations between directors, composers, and sound designers. However, each of the practitioners represented here acknowledge that such collaborations are almost never possible. Given that most film craftspeople work with hectic production schedules, deadline pressures, existing patterns of industrial organisation, and the inertia exerted by prevailing aesthetic norms, it is extremely rare that such an ideal meeting of the minds ever occurs. That said, the artists and academics represented here offer a wide variety of insights on the aesthetic possibilities and cultural implications of sound’s role in audiovisual media. This book is sure to have something of interest to film buffs, academic researchers in sound studies, and to practitioners in the filmmaking community.