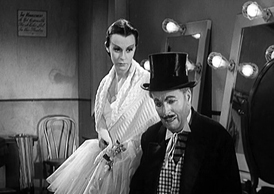 Translated from the French by Inge Pruks

Chaplin dies in Limelight. It is indeed the only time in his film career that he acts out death. The penultimate shot in this film is one of the most extraordinary in Chaplin’s total body of work as director. To begin with, the camera remains in wide-shot as it slowly approaches the group which surrounds the old clown dying on the divan. (He has been transported from his dressing room to the wings so that he can watch Terry [Claire Bloom] dance). The technicians bustle around him, the friendly though grumpy theatre manager welcomes the doctor, the music begins to gather in strength. At a distance it is not possible to tell the exact moment when Calvero’s eyelids close, a sign of life fading away, but the doctor notices it quickly and a sheet is drawn up to cover his face. It is then that the camera, after this series of small gestures, like a pantomime backed by stage music, withdraws briskly and catches Terry in close-up as she twice crosses our field of vision during her dance. Cut: the next shot, which is also the last, takes in the entire width of the stage where we see the performance of the young woman in silhouette (no longer the luminous Claire Bloom of the preceding shot but her double, a course of action which did not trouble Chaplin, having been brought up in the golden age of cinematographic illusion).

From death to life, from old age to youth, from the final collapse to the dance, no words describing the link traced by this camera movement could avoid trivialising the emotion of this instant. Like the hand on the cradle in Intolerance (D.W. Griffith, 1916), it expresses the power of classic cinema, a lost eloquence which resists analysis and asserts itself with a simplicity no longer affordable. And yet, watching the film again, I recognise, astonished, that right at the beginning, as used to be the case in silent cinema, an early intertitle announces it: “The glamour of limelight, from which age must pass as youth enters.” This is something the sound era cannot enjoy: recourse to the written word for something other than information, beyond its function as a narrative impetus. And immediately following, a second intertitle, even more evocative, even more old-fashioned: “A story of a ballerina and a clown…”

That’s all it took to head off from 1952, the release date of the film, an era when American films found it difficult to digest, if they didn’t actually refuse it, the Wellesian legacy, which wasn’t yet perceived as such; an era when, torn between political fears of the Cold War and industrial fears of a television takeover, it was ready to founder in an adventure called Cinemascope. And all of a sudden, another last intertitle: “London, a late afternoon in the summer of 1914…” It is, of course, the date of Chaplin’s beginnings in the cinema, having arrived in the United States the year before; but it is also the date of the end of a world, “yesterday’s world” as Stefan Zweig would say in 1940… Even though the 1914-18 war is sketched into the background of the second part of Limelight, it is the world which has been destroyed by this war that concerns the film. “Late afternoon”: that which precedes twilight, this “elegant melancholy of twilight” which is mentioned on two occasions during the course of the film by the character of Calvero.

Even though Chaplin will not learn of the legal proceedings undertaken against him by the State Department until he arrives in London for the film’s premiere, the imminence of exile is palpable throughout Limelight. But this exile is actually a return to origins. The long-gone London which the film recreates in American studios, far from the majors, is akin to the synthetic France brushed in by a few approximate visual references in Monsieur Verdoux (1947). It is of course the country of childhood, the world of music hall which will struggle to survive until the ’40s, the street musicians, a rich blend which the young comedian from a troupe called Karno would draw on to construct his character.

This London evoked by Chaplin in Limelight is tinged with wishful thinking: here poverty is not the abject misery of the slums, and even the fact of being called up for the army can be worn with a certain nonchalance. And yet, in the film this agony of the Edwardian era is not the insular limbo which testimonies of the period might otherwise suggest: on two occasions the name of Freud slips into the dialogue and, the moment when he rails against explanations which only offer synonyms, Calvero concludes that after all, “a rose is a rose is a rose”, allowing himself to add in a mischievous tone that his find is not bad and would be worth quoting. These reminders of what was new in the cultural context of the era, unexpected in the framework of a work of fiction visibly related to Victorian melodrama, show that the author did not wish to limit himself to a melancholy celebration of his own bygone days. 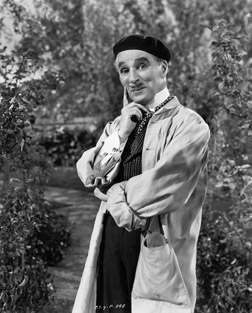 [“You have lost the battle, aged king
without a kingdom and in flight…”]

Critics and historians of other times have criticised in Chaplin the wordiness of Monsieur Verdoux and Limelight, an excess of reflection on Great Themes, most of which is quite conventional, which he allowed himself to pour out to his heart’s content. It seems to me that, having so long resisted the talkies (but not films with sound itself), Chaplin is reacting with his habitual insolence: “You wanted words? Well, here they are!” After the rumblings and eructations proffered by the representatives of power, from City Lights (1931) to The Great Dictator (1940), here we have Chaplin himself speaking at the end of this last film. And he speaks in order to say things which are important, his eyes staring into the lens in an extreme close-up: in spite of the cutaway shots to Hannah (played as though by chance by Paulette Godard, the one who seems to have been up to that moment of his life the only companion endowed with a sense of humour and an intellectual curiosity that in the United States was usually associated with Jewishness), it is the spectator who receives his words full on. The last sequences of Monsieur Verdoux are not sparing in boldly saying things which would challenge the ears of the victors freshly returned from the 1939-45 war, at a moment when they were entering a new arms race. And Limelight, a film which deals with old age and disillusionment, which illustrates the art of self-effacement making way for youth, is crammed with reflections which are no longer on politics and society but, dare we use the word, on life.

Langlois saw in Verdoux a Chaplin who had grown old. Calvero declares this identity very early in the film: “tramp comedian”, that is how he is defined by an old poster on the wall of his boarding house bedroom. There is no spectator who is not in the know when viewing this film, at least there weren’t any at the time of its release: even the youngest at that time would have recognised the silhouette of Chaplin’s tramp, survivor of a thousand chase sequences with authority in hot pursuit, vulnerable only to the beauty of young women whose charms he could never aspire to. This acceptance of his place as an outsider in the romantic tradition (his tender, wounded smile in the close-ups at the end of City Lights, his fragmented silhouette on the fading tracks of a circus which follows him, at the end of The Circus [1928]) finds belated compensation in Calvero’s chaste and sentimental relationship with Terry: / the aging survivor of an outmoded tradition / is loved by the young ballet dancer who, with his help, has taken her first steps in the realms of a “noble” art…

Through Calvero’s belated happiness it is Verdoux who receives reparation for his ideological rather than sentimental disappointment. He too had saved a beautiful young woman who was disillusioned with life. But she, incidentally a reader of Schopenhauer, reappears many years later, settled into opulence, covered with jewels, the mistress of an arms manufacturer. (Marilyn Nash, the serenely beautiful actress who plays the role, left the screen to become the real life Mrs Philip Yordan, a screenwriter well-known for lending his name to colleagues on the black list during the McCarthy era).

The film is both explicit and ambiguous on the subject of Calvero’s art. The first two numbers where we see the old clown performing are presented as dreamed memories. The next one takes place in the fictional present: it is an admission of the gap between Calvero and his public, a humiliation for the artist. The last is a series of several tableaux which prove to be a resounding success, but the film leaves a lingering doubt – at this commemorative evening, organised by the manager in response to Terry’s pressure, there is indeed a hired audience; however, the shots of the public honouring Calvero seem to express an authentic hilarity… Chaplin’s performance is the same in all these instances; it is only the public’s taste which changes with time. Even though bitterness does not take over Limelight, as will be the case with A King in New York (1957), where Chaplin appears as a shadow of himself (it is surely not by chance that the exiled king is called Shadov, a name whose Slavic echoes are not only obvious but also improbable), one reply is charged with stigmatising the blind masses amongst whom decent individuals can drown. 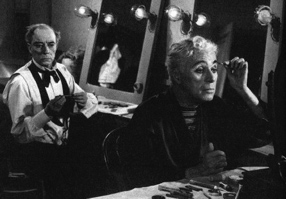 Limelight has sometimes been criticised for its degree of narcissism, because of the closeness between character and author. There is however a precise distance between the actor and the director. Chaplin’s generosity is no longer in question: he had already granted the best laughs to Martha Raye in Monsieur Verdoux; here, he gives up the end of the film to Claire Bloom, whilst he remains, face covered, in the background; earlier, he had accorded Buster Keaton a hilarious entrance, his first for a long time. But it is Chaplin’s own control over himself that is remarkable. His two most intense close-ups in the film also show him most distanced from his comic mask, and his acting is totally internalised: the shot where he wipes off his stage make-up after his failed comeback at the music hall, and the shot where, finding himself alone on the stage after Terry’s audition, he understands that a true artist has just emerged, that all that now remains for him is to disappear. The perfectly mastered pathos of these two precisely timed close-ups proves that for the director the film is more important than the actor’s vanity.

A film not quite in the present because of its mise en scène at the time of its production and release, a personal film in an era when first person perspective was not fashionable in the cinema, with the passing of time, Limelight has continued to establish itself as a great classic. It belongs to that category of works whose reputation the meanderings of rhetoric and the upheavals of society can only serve to further enhance. In Limelight, Calvero stops Terry from dying, orders her to live, teaches her to live; later he will die when she is strong with all that he had to pass onto her.

Perhaps, under the ashes of its beckoning byways, the history of cinema is also the story of a return to origins, of rereadings, of new definitions, of things passed on.