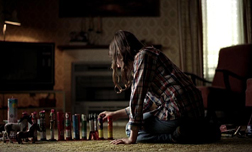 It was a neat piece of synchronicity which gave the opening of the annual St Kilda Film Festival added excitement. Programmed as part of the opening night selection at the festival, Glendyn Ivin’s Cracker Bag (2003) managed to achieve what had seemed the impossible by winning an award at the prestigious Cannes Film Festival only days before St. Kilda began. Festival Director Paul Harris clearly couldn’t have been happier with this turn of events. The local media coverage of the film in the wake of Cracker Bag‘s international success was both widespread and enthusiastic, and acted as a perfect lead-in to St Kilda, with its five-day program celebrating Australia’s short film industry. And whilst we might now lay claim to “our Glendyn” in the wake of Cracker Bag‘s success, it was his film and not the man himself that helped focus attention on the opening night of the St Kilda Film Festival in this, its 20th year.

Opening night proceedings got under way with a mixed bag of speeches. Judith Lucy, a comic not to everyone’s taste (but mercifully to mine) told some jokes and stories which helped keep the smile plastered to our faces while less engaging bureaucrats fumbled around for nice things to say about short film. This included one poor soul who tried to convince a packed Palais Theatre brimful of cinephiles that short films were indeed exactly like a box of chocolates (“This is a sweet one, that’s a hard one, this is a rough one…”). She persevered valiantly in the face of a restless and ultimately vocal crowd who had come to see interesting, challenging cinema and were suddenly confronted by the unholy spectre of Forrest Gump (Robert Zemeckis, 1994). But not even the surprise appearance of esteemed actor Rutger Hauer (who desperately wanted to say something at the opening, and then proceeded to say a lot of things – none of which were anywhere near this side of coherent) managed to alleviate the desire for the dimming of the lights and for the fest to commence.

The opening night films were, for the most part, safe but rewarding choices. Ivins’ Cracker Bag was certainly a highlight – not just of opening night but of the whole festival. It maintains a strong narrative and characterisation, but with an earthy, tangible sense of place and time. It possesses a palpable nostalgia not just for the excitement of the long-outlawed cracker night, but for the expectations of childhood. It works through the meticulous preparations of a young girl for the night, and uses the brilliance and the spectacle of the fireworks as a way of ending one stage of her life and beginning a new one. Whilst the film is located firmly in the suburban, there’s little of the cloying eccentricity that characterised mid-’90s Australian cinema – Cracker Bag uses the suburbs as a space to be worked within, rather than as an hysterical object of derision. Other opening night films were capable, if relatively unexceptional; most notably, Tropfest winner Buried (Tim Bullock, 2003) begins with a sense of the suburban eccentric but slowly twists the mundane into a more macabre absurdist comedy of errors, exhibiting excellent timing and a rough, immediate use of the camera.

The rest of the festival unearthed some exceptional filmmakers, but a relative dearth of good scripts. Many entries seemed obsessed with dreams, utilising fractured realities and shifting temporal spaces. Unfortunately, the ideas being explored through these devices were flat and bland, and the films buckled under the weight of their ominous voiceovers. Films like I Love U (Clayton Jacobson, 2002), Dupion (Dean Francis, 2002) and Sultana Meadows (Spike McKenzie, 2003), looked tremendous, but fumbled their painstaking mise en scène with blandishments about alternate states or dream lovers; the equally well shot She (David Manefield, 2002) churned out cliches to confront the overwhelmingly boring He Said She Said world of gender-based brain-space. These films seemed impressed by their own structures – the way they forced the spectator out of a more comfortable linear narrative. Yet the narratives themselves offered only the slightest of revelations about the most obvious things, and despite all the dream states and questioning of realities, the conclusions they reached seemed impossibly dull.

But this was by no means true of all the fiction films. One of the best screened was Shanti (2002) directed by Deepak Chopra. It employs comparable tactics to bring meaning to its narrative, but with a precise and evocative purpose. Telling the story of a young Indian woman married off to an abusive Indian-Australian (played, to my astonishment, by the manager of my very favourite local Indian take-away restaurant) Chopra does exceptional things with his use of the camera and of the spaces which trap and emancipate his heroine. Making judicious use of a Bollywood musical to connect her with her homeland and her virtually senile father-in-law, Chopra uses images of the past to forge space for Shanti in her new home. The jubilant conclusion to the film draws together the threads of the film, as with a few inspired sweeps of the camera Chopra turns a suburban park into an energetic, musical arena for freedom and optimism.

In terms of the short, one-joke comedies that proliferated, I was most impressed by Jeremy Weinstein’s Q (2002) which takes the chore of standing in line and constructs a brief, witty symphony of sound and movement, and Mark Warren’s The Advocate (2002), with its hero who hurls spin in a flurry of grotesque close ups and stream of consciousness damage control. The punchline is poorly delivered and a little obvious, but the journey to this flat conclusion is energetic, cheeky and engaging. Animations in the festival tended towards this punchline format, with Cane Toad (David Claton and Andrew Silke, 2002) the best of them, although in contrast Jonathan Daw’s Catch of the Day (2002) skillfully entwined sonic and near-subliminal visual cues to disturbing effect.

If the fiction films had problems with their scripts, then the documentaries often struggled with issues of focus and purpose. Some, like Simon Ozolins’ The Collection (2002) or more hopelessly, Michelle Prideux’s The Silent Scream (2002), found worthy subjects, then were unsure what to do with them. Prideux’s film in particular took an issue as grave as suicide and then blustered around interviewing non-experts who delivered uninformed advice but no insight. Considering the gravity of the subject, and the possibilities of approaching the issue in an incisive, revelatory manner, The Silent Scream doles out information like a mental health brochure and intersperses the man-in-the-street blather with black and white images of a woman inanely grabbing her hair as a sign of her anguish. 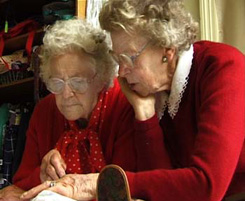 But whilst The Silent Scream typified the problems some had with finding a particular focus or story, these were in the minority. For the most part, St. Kilda featured a range of assured, confident and provocative documentaries, the best being The Meat Game (Shannon Sleeth, 2001), Breath of Fresh Air (Antony Balmain, 2002) and The Op Shop Ladies of Emerald Hill (Cath South and Stewart Carter, 2003). Here were three documentaries that took their basic subjects – slaughterhouse workers, chroming and the running of an Opportunity Shop respectively – and found greater narratives within, beneath, around them. While Ozolins’ The Collection gives us a woman’s obsession with videotape and leaves that as the only entry point, these others found a range of problems to face and issues to unearth. The Meat Game takes its central subject, a young boy earning a living at the meatworks in Poowong, and slowly uncovers a story far richer than we might expect. Less an investigation of a gruesome occupation, The Meat Game spreads out to take a snapshot of a small town community that is essentially trapped by its own size. Both Sleeth and the directors of The Op Shop Ladies work to create communities, a sense of place, and find the core of their subjects by pushing beyond the obvious attraction of their surfaces.

The other notable documentary in this year’s lineup was Mark Poole’s Birth of a Film Festival (2002), which looks at the beginning of the Melbourne International Film Festival when the first program was organised and screened at Olinda in 1952. The film does perhaps lose a bit due to its rather haphazard interviewing in crowded cinema foyers and its rather brisk investigation of the genesis of and impetus for the festival. But as a short, anecdotal history, Poole’s film manages to bring to light the roots of the film-festival culture in Melbourne, even if its analysis is cursory at best.

This of course, only covers a small section of the St. Kilda Film Festival, and there are many other films that are worthy of note, including Kurt Breitmeister’s Damo (2002), K. Brandstater’s Gravy (2003), Pierce Davison’s Medusa (2002) and Chris Eley’s The Vocabulary of Loitering (2002) (an all too rare essay film). Once again the St Kilda Film Festival has shown its relevance and importance to the local cultural landscape – and although the festival may not have been exactly like a box of chocolates, it is heartening to see attention focus on one of the more overlooked branches of our local film culture, and to discover such an impressive breadth of talent simmering just below the popular, mainstream, feature-dominated surface of our industry.