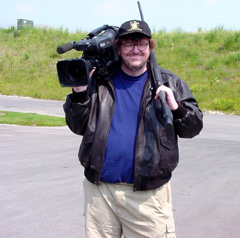 Michael Moore’s contentious new documentary Bowling for Columbine (2002) ponders the alarming question: why is it that America has such a high rate of shooting deaths per year? Are they just gun-ho or does their thirst for firearms fulfil a need that a free market economy just can’t satisfy? The statistics that Moore presents are quite astonishing. Consider this, Australia 65 shooting deaths per year, England just over 300, United States over 11,000! The answers and propositions Moore presents are hilarious, confounding and heartbreaking.

Anyone familiar with Moore’s work (Roger and Me [1989], The Awful Truth [1999]) would know that he is very much of the foot-in-the door school of filmmaking, which he uses to maximum effect in this documentary tirade. Moore’s journalistic tactics (mainly of the confrontational variety) might come off as sensationalist at times; he uses his ‘big lug’ everyman routine to get away with just about anything. So is he any different to say the snide finger-pointing ethos of “A Current Affair”? Or is he using the tools of vigilante journalism as an ironic comment on these very programs? In one unbelievable sequence Moore takes a group of survivors from the Columbine high school massacre on an excursion to Kmart in order to refund the bullets that have tragically left them paralysed and permanently maimed. This sequence could have easily come right out of local TV station, Channel Nine’s “A Current Affair”. How many times have we seen some shop proprietor harassed by a diligent reporter for selling dodgy products or ripping off customers? The marked difference of course is that it’s not some local corner store but super chain Kmart, while Channel Nine is owned by a ‘gentleman’ whose politics and values would make Pol Pot blush! So does Moore’s politics excuse him from using the same tactics? Personally I’m not going to lose any sleep over Kmart feeling hard done by or NRA President Charlton Heston feeling harassed by Moore’s niggling questions. Besides since when has having a political opinion ever been a neutral affair?

Through Moore’s exploration of America’s obsession with guns (would you believe a bank which gives you a free gun when you open up an account!) he presents a painful picture of a nation living in fear, fear of a foreign enemy, fear of a black planet and fear of themselves. One of the most affecting moments for me was the interview with the militia group that Timothy McVeigh belonged to. What Moore discovers is your garden-variety crackpot vigilante group. This group of armed to the teeth mercenaries would be something to get nervous about if they weren’t so god damn pitiful. These people are plain scared, a condition Moore speculates has more to do with the media drumming up hysteria via the nightly news and through dodgy ‘reality’ shows such as “Cops”.

Moore’s use of humour to present some pretty sobering facts is nicely caped off by a short animated sequence documenting the history of the NRA. Moore’s premise that fear of the black man is another reason white American civilians arm themselves is given credence in this wonderfully spiteful animated sequence provided by Matt Stone of “South Park” fame. In this segment we follow the history of the NRA, which coincidently was founded at the same time as the Klu Klux Klan. As we learn through the cheerful and anarchic animated bullet, America is still reaching for their revolver after the abolition of slavery.

One of my favourite moments in the film is Moore’s interview with shock rocker Marilyn Manson, who ends up delivering the most concise theory as to why America is splitting at the seams. This from a man who models himself on the anti-Christ! After the tragic shootings at Columbine High, the usual suspects came under fire by the American Right, namely heavy metal music, the Right’s favourite scapegoat. Manson in particular came under attack and ended up cancelling gigs in respect for the murdered students and their families. Manson puts the proposition across that it’s fear that drives the American public to maim and kill, fear that is drummed up by the media and the government. The American public then sooth the fear by consuming, keeping the capitalist machine rolling.

Moore points out that on the same day as Columbine, America dropped a massive arsenal of bombs on Serbia. This brutal show of force went pretty much unnoticed in the America media who failed to see the connection between the violence the American government propagates on other nations and the school shootings. Instead they chose to focus on a man who dons Goth drag as the scourge of American youth. Powerful insidious government with enough firepower to blow up the world ten times over or skinny white guy in fright wig, you decide.

There can’t be any more horrifying images than the aftermath of Hiroshima or the mass slaughter of Chilean civilians under Pinochet. All courtesy of the American government. As Moore goes through a depressing list of American sanctioned atrocities, boldly ending on the September 11 World Trade Centre bombing, you begin to get a picture of the real violence that is eating that country away. Hypocrisy and greed is America’s cancer and Moore’s brave documentary offers a tiny hope that at least a big guy from Michigan is keeping a close watch on the ‘stupid white guys’ in Washington.