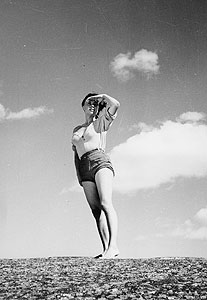 Summer with Monika is a standout early film in the massive oeuvre of Ingmar Bergman, surely the 20th century’s quintessential ‘art cinema’ filmmaker. Between 1946 and 1983 Bergman wrote and directed such international art-house staples as The Seventh Seal and Wild Strawberries (both 1957), Persona (1966), Cries and Whispers (1972), and Fanny and Alexander (1982), to mention only the most famous of almost 50 theatrically released films.

Along with Summer Interlude (1951) and Sawdust and Tinsel (1953), Summer with Monika represents the very best of Bergman’s first decade. He initially had trouble getting the film approved, largely due to a script with morally suspect elements (most notably adolescent sex and premarital procreation). Svensk Filmindustri finally approved a cheap shoot, however some scenes were later censored (notably a scene featuring drunken sex by the sea).

Harriet Andersson’s performance as Monika is as responsible as Bergman’s direction for this film’s impact through the years. The endlessly reprinted (most recently as the cover for the UK DVD release) low-angle image of the adolescent Monika, sitting on a sun-drenched rock with eyes closed and cardigan draped well below her shoulders, encapsulates what would become a cliché for Scandinavian cinema’s women – uninhibitedly sensual, assertive and ‘real’, compared to their Hollywood counterparts. Monika’s unshaven armpits, lack of make-up (in the island sequence of the film at least), and rebellious behavior importantly influenced the rendering of femininity in the cinema (especially in France), and Andersson’s performance prompted a very different idea of stardom.

Monika also plays out a textbook existential fantasy of revolt. Interestingly, this is figured not through an artist or intellectual, but working-class subjects and their milieu. The film portrays Monika’s attractive protean energy and raw sexuality as inextricably linked to a nihilism which drives her affirmations and rebellion, and which also comes to consume that which her boyfriend, and mainstream culture (including Monika herself), presume to be the goals of an aspirational bourgeois life.

The confronting depth of Monika’s character emerges slowly. At first she seems appealing in an unpretentious, erotically assertive way. Her unselfconscious sexuality is highlighted from the start of the film, when Monika perfunctorily checks herself in a mirror before walking into a grimy café, on the way nonchalantly adjusting her underwear from behind.

One also notices early that the urban scenes are largely studio-bound and carefully stylised, Bergman broadly rendering the idea of post-industrial working class life, rather than claiming to offer a precise sociological insight into such a milieu. The film thus emphasises the absurd ‘unreality’ of everyday existence in a drab socio-economic real. Performed within these theatrically rendered everyday spaces, Monika and Harry’s courtship is a broadly etched playing out of mimetic tropes. After their first date, Monika tries to copy the actors in the American melodrama they have just seen, proclaiming/pleading to Harry “we’re crazy about each other, aren’t we…?” Monika’s exaggerated enthusiasms seem centred around trying to transform herself and her situation through carrying out Hollywood fantasies of love and escape from a drab reality. (She is violently molested by her male co-workers, and lives in a hellish set-up with screaming younger siblings and a drunken father.) This foregrounding of Monika’s romantic behaviour as emanating from her intimate relationship to commercial cinema is a central element of the film’s reflexivity.

The most famous reflexive moment is when Monika sits in a café near the end of the film, having seemingly – almost inadvertently – rejected the conventional moral codes of the time (familial responsibility, monogamy, motherhood and a broadly Christian social contract). Godard and Truffaut, who would both later copy this image and the iconic narrative arc of the film, were enraptured by Monika as she sits smoking a cigarette, then slowly turns towards the camera to stare straight out at us. This shot is indeed radical in a fairly classical film, yet it merely makes explicit what pervades all of Monika‘s Stockholm scenes. It contains both the film’s surface (but reflexive and stylised) realism, then directly forces on the viewer the means of that textual construction via the stare straight to camera. Then Bergman theatrically blackens out a background world we thought was real, leaving only the abstracted surface of a woman’s face looking right at us in the dark.

Despite the formal-thematic interest of the Stockholm sequences, the experience of Summer with Monika is probably dominated by the lengthy island sequence in which Monika and Harry’s affair goes from rebellious euphoria to the chilly awakening from what he finally says has been a dream. It is perhaps best to resist describing the largely wordless rendering of this fantasy-idyll, wherein all Bergman’s Scandinavian ambivalence about nature and summer is intricately articulated by the multiple dissolve cuts and non-narrative compositions which make this film so visually sumptuous.

The island sequence is famous enough, but the journey to and from this sublime time and space also receives important attention in the film. We experience at some length the characters’ gleeful travelling from the city, and then following the end of summer, their doom-laden return. These sequences along the waterways of Stockholm (accompanied by each trip’s contrasting soundtrack) that bookend the island sequence, emotionally and aesthetically suture the viewer into the film’s world, further sealing our complicity (enforced by the later direct stares to camera) in the performances, desires and tragedies played out on-screen throughout.

Viewers who are uncomfortable with the more recognisably ‘Bergmanesque’ intensities of his most famous cinema might find much to enjoy in this film. There is here a powerful formal and thematic simplicity Bergman was rarely to achieve again. A still very fresh and subtly masterful work, Summer with Monika is the result of the protean youthful bravura in Harriet Andersson’s remarkable and iconic performance, and the disciplined clarity of Ingmar Bergman before he embarked upon his more ambitious masterpieces.