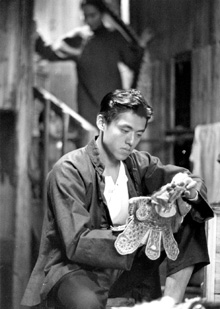 Since martial law was lifted in 1987, Taiwan has become one of the many vital sources of Asian cinematic development. Though his films have shamefully received virtually no commercial distribution in the West, Taiwan’s Hou Hsiao-hsien is now considered to be one of the world’s leading filmmakers. The Puppetmaster is the second in his trilogy of historical films that include A City of Sadness (1989) and Good Men, Good Women (1995). A City of Sadness covers the period from the Japanese surrender to the massacre of Taiwanese by government troops in 1947; The Puppetmaster, the time from the Japanese occupation to Japan’s surrender; and the third, Good Men, Good Women, the period after the Nationalists returned to Taiwan.

The Puppetmaster recounts the life of puppeteer Li Tien-lu from the time of his birth to his adult years, a life span roughly paralleling the years of Japanese occupation. Li Tien-lu, who played small roles in Dust in the Wind (1987) and A City of Sadness, and who plays himself in the film, has been the leading figure of puppet shows in Taiwan since the late 1940s. Presented as a series of personal events rather than as historical tableaux, the film dramatises both the fate of the Taiwanese people and the personal hardships of the characters, capturing the traditions that have been lost as a result of the Japanese occupation and the impact of Western values. In an interview Hou has stated that in this film he is “exploring the values of traditional culture which we have lost…. We have distanced ourselves from nature and man has become like a puppet – he has lost his power to be his own master. The Puppetmaster…represents the lament which I feel for the loss of our culture.” (1)

As The Puppetmaster begins, traditional Chinese music is heard and the narration establishes a historical context. We learn that “after Japan defeated China in the Sino-Japanese War, Taiwan and the Pescadores islands were ceded to Japan. This began 50 years of Japanese rule in Taiwan that lasted until the end of World War II.” 84-year old Li narrates the story in the ancient tradition of professional Chinese storytelling, a popular form of entertainment in medieval cities in which a story is told by a single performer in daily instalments over an extended period of time. The film intersperses Li’s narration with examples of performances and theatre, including Peking Opera, musical skits, puppetry and propaganda plays written for the Japanese. Hou utilises long static shots to convey the experience of distance, as if the viewer is watching a theatrical performance from the audience. In the words of author Yvonne Ng, “It is as if he is reluctant to intrude into the personal space of the characters, preferring to observe their actions as one would in daily interaction with others, from a socially acceptable distance.” (2)

Completely relaxed before the camera, Li interrupts the narrative several times to reminisce about his life and family. Some of the stories he relates are shown and others are not. According to Li, “The hardest things are separation and death” and in his life, Li had to face the death of his mother, grandmother, grandfather, father-in-law, and youngest son. He relates how his grandmother (Bai Ming Hwa) had a rough life because everyone she lived with died. This prompts his father (Tsai Chen-nan) to tell him to take grandmother to the hills and look after her. When she becomes ill, the doctor tells Li that she will remain alive as long as he stays with her. The minute he is called away from the house, however, the prophecy comes true.

Going against his father’s wishes, Li marries into a theatrical family and becomes an apprentice to a puppeteer named Mr. Li. Three years after the Japanese appoint a new Governor on the island, all outdoor performances of plays are banned and thousands of puppeteers lose their livelihood. Times are hard and commodities are rationed for the Taiwanese. Li is forced by economic realities to put on puppet shows for a Japanese propaganda troupe in Taipei. When the Japanese surrender, Li and his first apprentice return to Taipei where he performs once again on Bingyang Street as the Japanese occupation ends. As the spirit of the Taiwanese people is rekindled, Li once again has his own stage.

In The Puppetmaster mundane household activities and conversations about family and friends are equally important in providing an understanding of events going on in the background. In the scene where a Japanese officer comes to the family’s home and orders everyone to cut off their pigtails, there is little overt threat or resistance. Much of what is going on is implied in the expressions of resignation of the characters. Hou’s films, like a Chinese painting, are deliberately designed to incorporate the aesthetic of ‘liu-pai’ (opening the mind to what is not shown on screen). In this film, using dark interior shots with light coming only from the ceiling, Hou creates an abiding mood of nostalgia. According to the director, his interiors suggest “a mood of old China, its melancholia, its intimacy and density; its long history and sense of tradition.” (3)

The film is a haunting portrait of a people who have lost their way and are seeking to regain their cultural identity. In the words of the director:

Taiwan has inherited a legacy of influences from Japanese culture…. During the Korean War, we drew closer to America and imbibed its culture and influence. I feel our generation has a responsibility to conserve the beauty of our own traditions, and to disseminate them using the tools of our age and from our own perspective. In this way, the best and most worthwhile of our traditions will be passed on to the next generation. (4)

The Puppetmaster succeeds in giving us an insight into these noble traditions.