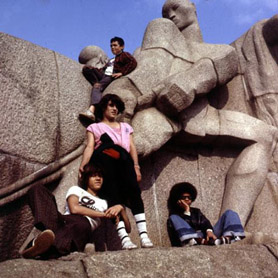 Hector Babenco’s Pixote has as its antecedents such works as Jean Vigo’s Zéro de Conduite (1933), Vittorio De Sica’s Shoeshine (1946), Luis Buñuel’s Los Olvidados (1950), and François Truffaut’s The 400 Blows (1959); the gun-toting youth of Barbet Schroeder’s Our Lady of the Assassins (2000) would certainly have been influenced by Pixote. The script was written by Babenco and Jorge Duran, from Jose Louzeiro’s novel Infancia dos Mortos.

The film begins as a documentary. Babenco addresses the camera, and states that 50 percent of the population in Brazil is under 21, and this includes three million homeless children. Brazilian law prevents anyone under the age of 18 to be prosecuted for criminal offences; older criminals thus prey on these youths. Babenco, standing in front of a slum area, then introduces Fernando Ramos da Silva, who lives there, as ‘Pixote’ in the film proper. Los Olvidados had a similar documentary beginning: it is used as a foregrounding of events to come, a merging of the real and fictional, so while we are witnessing events in the fictional story, we must, in fact, take them for truth.

Pixote is divided in two parts. The first details Pixote’s ordeals in a juvenile reformatory. He witnesses violence, rape, humiliation. As in the Hollywood prison genre (except in this case, the protagonists are children), the point of view is exclusively of the inmates, and emphasis is placed on power structures operating within personal relationships. Those in power (the guards, the police chief) are corrupt and violent. It is only when the lover of a 17-year-old transvestite, Lilica (Jorge Juliao), gets killed, that escape is necessary.

The second part of the film is set in the urban world outside of the reformatory. The narrative follows four of the protagonists (Pixote, Lilica, Chico and Dito) as they survive by pick-pocketing, drug-dealing, pimping for the prostitute Sueli (Marilia Pera), and robbing the johns whom Sueli brings back. Both Lilica and Sueli act as mother figures to Pixote. Both also sleep with Chico, the father figure and principal breadwinner. Possibly the most disturbing scene in the whole movie is when Pixote discovers Sueli’s dead fetus (aborted by her) in a waste-bin in the bathroom. This is directly linked to Pixote suckling on Sueli’s breast, at the end, after he accidentally kills Chico. This Oedipal triangle results in her pushing Pixote off (stating that she does not want a child), thus precipitating his aloneness in the universe.

Though Pixote was rejected by the American Academy’s Foreign Language Film Award Committee, the film garnered excellent critical reviews in the United States, winning best foreign film from the New York Film Critics Circle. Perhaps it was a reaction against the over-produced and over-budgeted U.S. epics at the time, which seemed to indulge Hollywood directors whilst only inviting critical derision (e.g., Heaven’s Gate, One From the Heart). Pixote, on the other hand, seemed to be influenced by Italian neo-realism, with its casting of actual people to play themselves, that is, non-professional actors (Marilia Pera was the only professional actor in the film), and then shooting on the locations where they lived and worked. Babenco used the children’s ideas to form almost half of the script. Critics such as Pauline Kael were also impressed by its raw, documentary-like quality, and a certain poetic realism:

Babenco’s imagery is realistic, but his point of view is shockingly lyrical. South American writers, such as Gabriel Garcia Marquez, seem to be in perfect, poetic control of madness, and Babenco has some of this gift, too. South American artists have to have it, in order to express the texture of everyday insanity. (1)

The film seemed to capture the spirit of the ‘arthouse’ cinema of Hollywood of the late ’60s and early ’70s, itself influenced by European art films and Italian neo-realism. Incidents in Pixote don’t seem to be set up for the cameras; the film seems to follow the characters no matter what they do or say.

The ending is genuinely tragic, more so because in reality da Silva was actually killed by police bullets in 1988, when he was 19. And so the ending seems to foretell his real death – after being rejected by the mother figure of Sueli, Pixote/da Silva is walking along a railway line, gun in hand, away from the camera, his figure disappearing in the distance, out of the film (documentary or fiction), and out of our lives.