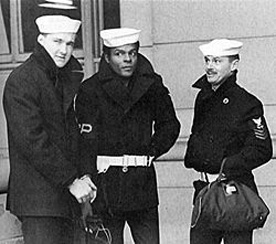 “This kid ain’t goin’ anywhere. On the outside too many bad things can happen to him. This way the worst part’s already behind him.”

One of the most interesting aspects of that era of generational change we now call ‘New Hollywood’ was the way American cinema seemed to become more ‘American’ in scope and content. The way films such as Bonnie And Clyde (Arthur Penn, 1967), Easy Rider (Dennis Hopper, 1969), The Last Picture Show (Peter Bogdanovich, 1971) and Paper Moon (Bogdanovich, 1973) looked and sounded evoked an American national cinema steeped in real histories and vernacular sensibilities. The “tight, clean, knowing” quality of The Last Detail comes across like a salty anecdote told by an ex-sailor in a New York bar. (1)

The film appeared during the closing moves of a Vietnam War that began in Cold War complacency and ended in face-saving withdrawal. Afflicted by war trauma, the Watergate crisis, and, for the first time since the 1941-45 conflict, economic insufficiency, the ’70s were difficult years for Americans. As a Souza-esque brass band theme plays behind the credits for Jack Nicholson, Robert Towne, Hal Ashby, iconic figures of that New Hollywood renaissance, you realize the patriotic zeal will be tinged with irony. The autumnal Norfolk, Virginia naval base from which three sailors embark gives way to snow and wind as they head north into increasingly desolate Washington, New York and Boston. Compare the pessimistic greys and blacks of Ashby’s film with the desultory blue-collar worlds of such contemporaneous works as The French Connection (William Friedkin, 1971), Rocky (John G. Avildsen, 1976) and Taxi Driver (Martin Scorsese, 1976).

As critic James Monaco observed in his Sight And Sound review, few American films treat working class life without condescension. Nominally evoking the studio GIs-at-liberty comedy typified perhaps by MGM’s On The Town (Stanley Donen and Gene Kelly, 1949), The Last Detail has none of the vivacity of a society in triumphant post-war overdrive. Less interested in the traditional metaphor for movie-going pleasure suggested by the MGM sailors’ hi-jinks, the prospect of ambivalent petty officers going on a hootenanny whilst escorting a rating to the brig is staged in a workaday society in the grip of quiet desperation. Ordinary Seaman Meadows (Randy Quaid) has never been drunk, stoned or laid. He is about to be incarcerated for trying to steal $40.00 from a polio donation can, losing the liberties that most young Americans take for granted. Meanwhile, after a brief respite Signalman 1st Class ‘Bad Ass’ Buddusky (Jack Nicholson) and Gunner’s Mate ‘Mule’ Mulhall (Otis Young) reluctantly return to duty that is all the more onerous for what Meadows’ innocence has revealed of their own status as navy ‘lifers.’ Whether in work or in trouble, working stiffs spend whole lives in debt to the system, savouring passion and intoxication in the narrow interstices of the day. Whilst On The Town revelled in a fantasy of off-duty love and anarchy, The Last Detail sees unremitting duty and unpitying authority as the average Joe’s American legacy.

Like other New Hollywood films, The Last Detail draws upon an unbeautiful American experience. For Peter Biskind, Quaid looks “like a cartoon character, a pasty-faced doll awkwardly fashioned out of soft cheese.” (2) We are reminded of those Brueghelesque rubes played by Michael J. Pollard and Gene Wilder in Bonnie And Clyde, so grotesque but so redolent of authentic American subways and diners. The boys fetch up at a party full of counterculture types who ask ‘Mule’ why there are not more black officers. Because they need a recommendation from a white man, comes the answer. At a Buddhist self-awareness group, the interlopers stand dumbfounded before an America so atomised Americans can barely understand each other. Alienated by their odyssey through this uncomprehending society, the boys decide to have a picnic in the middle of a snowbound park, its pointless benches standing in regimented rows around them. If Ashby’s Harold And Maude (1971) showed a director in sympathy with social incomprehension and outsider-hood, The Last Detail also responds to the protest sensibility of a new generation of filmmakers who railed against the rigid Hollywood establishment. A wilful iconoclast, Ashby promoted Michael Chapman – who in 1975 will shoot Taxi Driver – from camera operator to DOP for The Last Detail.

At the heart of the film’s complaint against established hierarchy is Buddusky. When we first see him, he is asleep, making Nicholson/Buddusky’s subsequent performance all the more dynamic, engaged. Coming on with the pugnacity of a James Cagney or the young Kirk Douglas, Nicholson/Buddusky is fuelled by frustration, rage and violence. See him trying to get Meadows to take a poke at him. See him strutting for some passing marines, poised somewhere between prize-fighter and prostitute. As he proudly declaims his ‘handle’ in public, the moment resonates with that then-recent anti-Hollywood manifesto of black rage Sweet Sweetback’s Baad Asssss Song (Melvin Van Peebles, 1971). If Jack Nicholson became infamous for overripe performativity in the ’80s, the actor comes alive as Buddusky because his performance is actually about something, a navy lifer’s need to keep his head amid the oppressive pedantry of service life and the apparent apathy of the civilians he serves.

Few films have such a sense of time running out, an obsession with finitude that renders each coarse naturalistic second poignant. When they take Meadows to the whorehouse, he must choose quickly and well. When he thinks he has fallen in love, the still-waiting camera urges him to speak up before it’s too late. When he tries to escape through the park, we pray that Buddusky won’t load his revolver in time. When the three men sprawl like schoolboys on the snowy ground, it is getting dark. Two years after The Last Detail, Jaws (Steven Spielberg, 1975) appeared, marking the emergence of the synergy-driven corporate blockbuster that would mean death to little New Hollywood junkets like this. In 1988 Ashby himself was dead.