Critical responses to the early films of Michelangelo Antonioni remain relatively scarce. In contrast to the films that brought him to international prominence in the 1960s (L’Avventura [1960] through Blow-Up [1966]) – which are each liberally seen, regarded and discussed – Antonioni’s first five features are still often neglected as inferior aesthetic and/or less satisfactorily auteurist works. (1)

As the film marking the end of this early phase, Il Grido has tempted a reductive critical inclination to position it as a locus of transition. Specific qualities evident in Il Grido are sometimes subordinated to the general task of inferring meaning from Antonioni’s subsequent meta-text. Probably the two most common symptoms of this methodology are confluent interpretations of Il Grido that stress the symbolic and psychological functions of its (a) accentuated bleak landscape and (b) narration of a protagonist’s physical journey. (2) Understood in this way, Il Grido might be treated as simply reflective of a more complex, opaque and profound system of expression evident in, especially, Antonioni’s middle period. 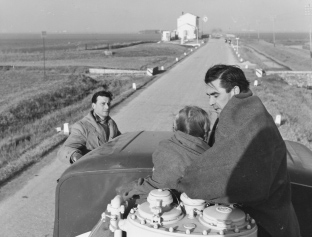 The two pages that Peter Bondanella allocates to Il Grido in his conventional text, Italian Cinema, exemplifies this broad and predictable approach:

The emotional impact of this work is achieved by completely understated methods. Very little musical accompaniment is employed and dialogue is often sparse or elliptical; silence rather than words accompanies the director’s stark images of alienation…. The result is an existential portrait of despair buttressed by a poetic evocation of the Po landscape always so important to Antonioni’s view of the world…. Little occurs in the film, but the viewer comes away from it with unforgettable memories of the flat, misty landscapes Antonioni photographs, where people alone stand out in sharp relief – solitary and sad figures whose tragedies seem reflected by their environment. (3)

Bondanella’s account perhaps sustains the imagination, but I wonder if his impression of “stark images of alienation” is experienced by other spectators? What can be grasped from his unfocused statements is that the construction of some kind of relationship between people and physical space is one of Antonioni’s dominant strategic intentions. By comprehending this dialectical arrangement in primarily a symptomatic fashion, however, tangible aspects of representation are overlooked in favour of other putative ideological, symbolic and psychological concerns. I consider this a prime factor in the lack of observation regarding Il Grido as first and foremost a depiction of a working class rural milieu experiencing the rapid encroachment of modernisation.

Aldo (Steve Cochran) is presented as a distraught man with three interrelated social burdens: he is powerless to sustain an unrequited heterosexual love affair; as a single father, he is erratic and lacking in affection; and, significantly, he displays extreme job dissatisfaction and hesitation. (4) If the narration of Il Grido is structured as a journey, it is principally for the sake of organising a sequence of separations concerning Aldo as he tries to escape from his problems. He flees the town of Goriano where his ex-lover, Irma (Alida Valli), resides. In one of the film’s most distressing moments, he severs paternal relations with his daughter, Rosina (Mirna Girardi), since she reminds him of Irma and impedes both his sexual autonomy and employment opportunities. Aldo’s major liability, however, is his fundamental resistance to steady labour. No less than five separations of Aldo from the workforce are enacted in varied ways throughout Il Grido, implying that the subject of itinerant labour to a large extent generates and shapes its form. Two moments in particular highlight his irrational behaviour and indicate his frustration. First, he attentively consults a guidebook and learns a few Spanish words (“Welder is soldador“) for a potential job in Venezuela. Pondering the situation mere seconds later, he flings the material onto the embankment of the river Po and strides away. Second, when Aldo sends Rosina back to Goriano he professes to her that “Papa can’t explain why he doesn’t want to work,” thus devaluing his recent efforts (he’s been pulling gas at a remote station). These small moments seem to intimate Aldo’s confusion with the elusive forces of change inflicted by modernity.

In this context, the oft-mentioned flatness and desolation of Il Grido‘s landscape obtains a different type of purpose. Over-exposed backgrounds, high horizon lines and 180º cuts and pans that reverse the field of vision contribute to an effect of enclosing characters within a barren space. What may then stand out in contrast are objects that breach the emptiness: the petrol station, speedboats, the dredger, the bus to Goriano, expensive cars (“What make is that car?” asks Rosina, “What’s it to you?” Aldo replies; later she is nearly run over on the highway) and various other trucks, motorbikes, cranes and so forth. Interestingly, all of these examples convey a locomotive utility; for Antonioni mechanical movement in and between spaces (with all its self-reflexive irony surely intentional) is a prime signifier of the modern. (5)

Aldo is incapable of adjusting to a new mobile lifestyle. The nomadic escape he seeks is ultimately unrewarding since he longs to return home and resume a traditional, family-centred, existence. Everywhere he turns in his search for a new job, and a new place to settle with a new soulmate, he discovers that modernity has ruptured and eclipsed his traditional principles. The petrol station only exists because its owner, Virginia (Dorian Gray), asked her father to sell their family farm. The brazen foreman of the dredger explains that money is easily made not through hard labour but simply by subordinating one’s self to financial superiors (or “by bowing” as he puts it). Andreina (Lynn Shaw) hits Aldo hardest of all. By showing him that she is willing to sell her body, he is faced with the rather naïve, but to him foreign, proposition that love alone is not enough to sustain life (“I’m hungry … and so are you!”). It is these kinds of revelations that affect Aldo’s sensibilities. I would argue that their expression in the mise-en-scene is tangible rather than ambiguous. Interpretative accounts that stress the metaphysical properties of space in order to grasp essential anthropocentric social and cultural meanings fail to properly acknowledge that Antonioni’s films, especially his early features, also question the functions of industry, institutions and the economy. In this respect, his work engages with myriad elusive and palpable discourses – its obviousness heightening its mysteriousness.