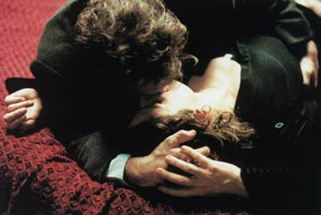 This piece was originally published in Sofa Issue No. 17. It appears here in English with permission.

Few cineastes have garnered as much attention in Sofa as Claire Denis. Because her films come out with a rhythmic regularity, of course, but above all because they are among the best the cinema can offer these days. The release of Denis’ latest film, Vendredi soir (Friday Night, 2002), is yet another occasion to renew a conversation with a very great director.

We said a lot of good things about Beau Travail (Sofa, No. 5), and even more about Trouble Every Day (Sofa, No. 11), what are we going to say about Vendredi soir, her new film, in this Sofa No. 17? (Note the amazing regularity.)

Vendredi soir is adapted from a book by Emmanuèle Bernheim that appeared several years ago. The book is a hundred or so pages, but the story takes up two lines: Laure (Valérie Lemercier) is about to move in with a man. Thanks to a transport strike, she meets Jean (Vincent Lindon). She spends the night with him.

Between Laure and Jean, almost no word is exchanged; almost no explanation is offered to us. This is Denis’s initial tour de force: succeeding in making us feel the emotions and the desires of her characters with recourse to neither dialogue nor voice-over. The gamble is a risky one, moreso than for Beau Travail or Trouble Every Day, where the brutality or the originality of the situations created a base that supported her cinema. Here, we are dealing with the oldest story in the world, “boy meets girl”, and as Denis has rightly said, one must place one’s entire confidence in the powers of the cinema.

Her primary support is always her actors. With Vendredi soir, Denis confirms once more her sense of casting – the word seems a vulgar one to describe the relation of this director to her players. Valérie Lemercier and Vincent Lindon are perfect, on the level of pure presence, of penetrating looks and lighting a cigarette. That is not all. When Beau Travail came out I wrote, “this director is on the side of what is expressed by images, metaphors, raw noise, music, all the evocative powers of languages which are not transmitted by weak words.” Actually, words in Vendredi soir, far from bringing things together, separate or deceive individuals – sometimes in a comic way, as during a surreal exchange between Valérie and a driver, perhaps the longest exchange of dialogue in the film: “How much? Pardon? How much for your car? 15,000. You must be off your head!”

“You must be off your head”, certainly. It is the body which is always at issue for Claire Denis. The body and the barriers erected against it: the preservation of self and of the other (Trouble Every Day), uniform (Beau Travail), age (US Go Home), social class (Chocolat). What is at stake in the films of Claire Denis is often this: connecting bodies (or territories – the notion of the stranger, the foreigner, acting as a bridge between the two in her films).

In Vendredi soir, it is windows, and car bodies which get in the way of any union, any circulation between individuals: the use of strikes and traffic jams is obviously not to be taken as an attempt at realistic contextualisation of the story, but rather as a car metaphor for desire. To be sure, you have to be careful with metaphors in film. It’s not enough to want to signify, you also need to know how to show – which this director does very well. When she films first the cars circulating in slow motion, without ever touching each other, and then Vincent and Valérie brushing against each other in slow motion on the stairs, the comparison is established in a neatly cinematographic way.

If Claire Denis is “areligious”, if she refuses all transcendence in her films, there is still in her work a whole mystique of desire. A belief in flux, in the impalpable, the invisible (which is why her films leave certain spectators clueless). This is the reason that her work accords such a prominent role to music – music, which they say would have been “the only instance of communication between souls” if language had not been invented. Consequently in Vendredi soir there is a whole network of images which are opposed to the smooth and hard surfaces of cars: exhaust fumes, air from driers, cigarette smoke, steam, all of which circulate freely and create a bond between individuals, between skin and skin.

Thus, as always with Claire Denis, to expose one’s skin is to put it in danger. An idea once again marvellously staged in the sequence where Jean takes the steering wheel. Suddenly he is overwhelmed by anxiety; it has to be overcome; it’s the price you pay for establishing contact. Desire is frightening, menacing, but it renders us a little less strange to each other.