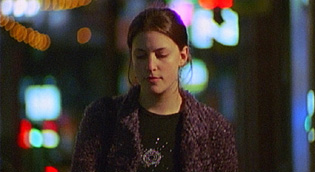 The most obvious lesson from the 2002 St Kilda Film Festival is that the definition of a film is more elastic than ever. Over half the inclusions in the main competition program were made on digital video; for every entry of this kind that offered a reasonably attractive, well-lit image (such as Masked Gannet [Josephine Wright, 2002]) there’s one where a potentially workable script is sabotaged by sheer visual ugliness (such as Hudson, Logan And Carter On The Case [Nicolas Bufalo, 2002]). Rhythms [Jake Robb, 2000] and Jetset [Jonathan Oglivie, 2001] used the drained, murky colours of video to evoke a feeling of drowsy numbness: Circadian Rhythms unfolds from within the consciousness of its depressed white-collar hero as he commutes back and forth from work, drugged with monotony to the point where “you simply dream of being awake.” (Comparable depths of anomie were sounded in the computer-animated Metal Army [Antonio Artese, 2002: a bored robot passes the time by playing computer games, escaping from one metal fantasy world into another.) Jetset belongs in the “why was this made?” category – it runs for about 50 minutes, all set in a symbolic airport where nobody ever leaves. The comic-portentous dialogue is atrocious, but there’s something fascinating about the enclosed, otherworldly setting, like an abstract stage set (the only aeroplanes we see are obvious miniatures). I doubt this torpid curiosity item would have commercial prospects even as a straight-to-video release, but it features a number of well-known actors (including David Field and Jessica Napier) and may originally have been intended as a feature. Oglivie has been making short films for well over a decade, without gaining much of a public profile; just possibly this fact has some connection to his artistic fascination with inaction, boredom and delay…

There’s a defensive awkwardness and self-mockery detectable in a few of these movies, as if their makers were asking themselves: do I really deserve to be called a film director? Often the question is moot. Several comedies seem to trade on their own embarrassment, as if it were automatically humiliating to be making films in Australia on a minimal budget. In Getting It Up In Cannes [Serge Ou, 2001] “comedian” Tania Lacy staggers through the Cannes Film Festival much as Jeremy Weinstein did last year in his embarrassing Looking For Harvey [2001]. Is it documentary? Mockumentary? Some horrifying blend of the two? After Lacy’s attempts to schmooze real celebrities come to nothing, she has to submit to the final indignity of being humoured by trash mogul Lloyd Kaufman, who doesn’t seem sure what movie he’s in but mugs to the camera anyway. Strangely, internal evidence suggests that the Cannes footage was shot back in 1998 – did it take three years to edit? Tragic Love [Gary Eck, 2002] addresses the celebrity problem in a different way, getting an impressionist to provide the voices of guest-stars Tom Cruise, Arnold Schwarzeneggar and Russell Crowe. Again, it’s presumed we’ll find humour in the unthinkably vast gulf between “real” filmmakers and local nobodies. Ziggy’s Fan [Gerard Cogley, 2001] has a similar theme, with a fictional David Bowie lover who goes to pieces at the very thought of meeting her idol.

Occasionally the scaled-down, quasi-home movie approach works wonders, as in Tanaka (Clayton Jacobsen, 2001), where delicate acting redeems a somewhat contrived and predictable basic story. A Japanese man comes to Australia for the funeral of his uncle, who (it transpires) lived for many years before his death in a relationship with another man; a dispute over the dead man’s ashes ends in new mutual understanding. The film has no major surprises in plot or tone, but works, paradoxically, just because of that lack of dramatic heightening; refusing to caricature Australian suburbia, the style has a neutrality that registers the limitations of the characters without judging them. Accepting an award for best achievement in video, Jacobsen explained to the audience that virtually all the dialogue was improvised by his actors from a basic outline. It’s not Mike Leigh, but it has a few of the same virtues – empathy, tape recorder realism, the very gentle comedy of shy, well-intentioned people fumbling towards communication. 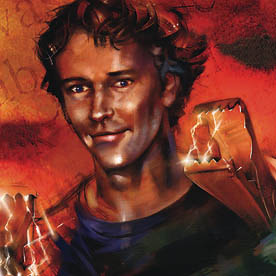 It’s become a critical cliché to complain that Australian short filmmakers (especially at Tropfest) are overly fixated on one-shot “gag” films. Actually there are relatively few of these at this year’s St Kilda Festival; more popular are blokey thrillers in a Tales Of The Unexpected mode. Often the genre is nominally “black comedy” but while the gruesome storylines obviously aren’t meant very seriously they aren’t necessarily funny either. The Host [Nicholas Tomnay, 2001], The Hitch [Michael Booth & Damon Herriman, 2002] and Stump [Robert Forsyth, 2001] all revolve around seemingly level-headed, middle-class characters who turn out to be capable of psychopathic evil. Attacking bourgeois values certainly isn’t the point – if anything, there’s a throwaway acceptance that psychopaths are basically like everyone else. Mostly the hammy or half-hearted performances attest that these films aren’t meant to be viewed as more than affectlessly “trashy” stylistic exercises. As such they have their moments. Late Night Shopper [Tim Bullock, 2001], using the not-too-original concept of a robbery/massacre in a 7-11, has zero emotional content beyond the filmmaker’s evident pleasure in designing a punchy action sequence around an everyday location. Wait Till Your Father Gets Home [Martin Wilson, 2001], about an retarded grave robber, is shot in 35mm and has a batty stylistic grandeur comparable with pre-Lord-Of-The-Rings Peter Jackson – there’s even an old-fashioned orchestral score, with violins ratcheting up and down hysterically during the climaxes. The Hitch, like a number of these films, has trouble locating an appropriate punchline, but the wordless opening sequence establishing the horrific back story of the lead character is worthy of Brian De Palma in its narrative fleetness and creepy lyricism.

The gender flipside of the black comic thriller – almost exclusively the province of male directors – is the talky, quirky “relationship film.” The most grating of these is Nice Guy (Karina Mathers, 2002) a monologue to camera by a sexually frustrated woman who insists on describing herself as “virile.” Contemporary Case Studies (Janet Mereweather, 2002) is a hit-and-miss series of quizzical vignettes on aspects of modern romance. It’s a highly studied, formalised film, using text and image as counterpointed graphic design elements in a way more familiar from TV advertising than narrative cinema; still, as other critics have noted, the basic idea owes an awful lot to Jane Campion’s Passionless Moments (1985). Both funnier and more conventional, Tram Stop (Jessica Muschamp, 2001) a highly self-conscious romantic comedy that suggests a more professionally scripted Strange Planet (Emma-Kate Croghan, 1999). Two cute young strangers fall into conversation while waiting for a tram, then map out every detail of their hypothetical future relationship. On the surface Muschamp offers a comically pragmatic view of flirtation and romance, as the characters weigh up pros and cons and cautiously navigate future pitfalls; yet beneath all this knowing irony there’s a barely disguised nostalgia for fantasies of perfect, eternal love (a motif wryly echoed in the animated High Stakes [Hilda Taugbol, 2000] where an old couple die, go to heaven and still won’t stop bickering).

The remarkable thing about China Face (Anna Jeffries, 2001), far and away the best film I saw at this year’s Festival, is that it starts from the same point as so many other Australia youth movies, yet takes us far beyond the usual signals of sophistication (it’s also much better than the only other film I’ve seen by Jeffries, the facile Ocean And Bird [2000]). The themes are familiar: boy-girl romance and self-discovery, groovy young things adrift in the contemporary city. Aged 18 or so, the heroine appears (mysteriously) alone in the world, equipped with a part-time job and her own apartment. She also paints, “just a bit,” and yearns after a boy who sings in a band. Playing a character who shares her own first name, Jo Rosenberg gives the kind of utterly open performance, that makes it impossible to separate conscious acting from natural behaviour. As the title suggests, the film is fascinated by the contradictions it sees in her round doll-like face, a mix of placidity and impatient desire. Underpinning Jo’s practiced self-possession is her barely-concealed delight in wielding the props of adulthood – learning to roll a cigarette, or turning the key in her manual car (“Automatics are a joke”). Jeffries’ nervous, jump-cut-driven style is a direct response to particular colours, sounds, performance rhythms; as with Wong Kar-Wai, the film aspires to the immediacy of a pop song, using sensual excitement to evoke complex, ephemeral emotion. Yet in the most sustained sequence, a mating dance between the two leads in Jo’s apartment, the camera carefully keeps its distance, letting us follow for ourselves the split-second gradations between degrees of grace and awkwardness, desire and panic. Jeffries is clearly a stylist; but she’s interested in “style”– cinematic and personal – less as a fixed set of traits than as a fluctuating process that allows for continual reinvention and discovery.