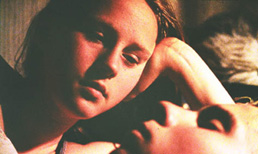 Translation by the author and Timothy Mathieson

A shorter version of this article and the interview below was originally published in German in filmtext.com and appears here with the permission of the author.

“I’ll die if I don’t see you”, Schöps mumbles into the security intercom. There’s a beep. “What? Can you say that again? The intercom isn’t working right”, is Nicole’s reply, emanating from the loudspeaker. But Schöps isn’t able to repeat a sentence like that; rather, he leaves. Nicole (Nicole Gläser) and Schöps (Christopher Schöps) are going out together, they are 15 or 16 years old and they live in Berlin.

This small scene marks the two poles of director Valeska Grisebach’s film Mein Stern (You are my Star, 2001): the lofty rhetoric of young love and the precarious relationship between love and rhetoric. It is such that an unfortunate circumstance or careless remark can shake feelings of love as can an embarrassing confession, comprised of three little words, reinforce it. But Nicole only risks saying “I love you” once Schöps has fallen asleep beside her.

Grisebach doesn’t approach her characters, Nicole and Schöps and their feelings for each other, with any particular sentimental predisposition. Rather than place demands on her characters, she merely observes them. With humor but without irony. She is never calculating so as to exploit emotions. No one needs to fight or fondle passionately for feelings to surface. Nobody needs to have a pound of steel thrust into them or to speak slang in order to illustrate a lifestyle. Tattoos are painted with waterproof markers. Grisebach’s characters are apprenticed at a bakery chain “cause it smells awesome”; their choice careers are: “a commercial clerk or tiler”.

Mein Stern avoids all the stock themes to which the narrative of youth culture generally conforms. The film does not explore drug problems, outcasts, or even the socially disadvantaged. The director described her intention as follows:

Of course, there are a lot of dangerous things in the world of the adolescent, but I felt – especially considering the way the cinema spectator is conditioned – I didn’t want to take up the youth culture of drugs etc. The normal, the quotidian interests me. I didn’t want to make a film with any generic statements about youth in the year 2000 but rather to capture a timeless and perhaps even old-fashioned moment.

It is in fact astonishing how petty bourgeois the portrayed love- and life-story is. Schöps doesn’t move in with his buddies, but proudly lives alone as the sole presider of his first single apartment. Thirteen year-olds discuss “who broke up last”, before staging another wedding. Nicole’s younger sister dreams of a Prince Charming while firmly embracing her N’Sync pillow. Nicole and Schöps want to stay together “forever”.

However conservative they might appear, the dreams of the youth and the reality from which they emerge has rarely been represented more carefully or beautifully in German cinema. This is the result of thorough preparation. The film team spent half a year looking for actors and used the casting process to interview young people. Some scenarios in the film are adopted from this research material. During the shooting Grisebach worked with a combination of improvisation and pre-direction: “There was prepared dialogue and there was dialogue provided in large part by the two protagonists, where they gave me a great deal.” 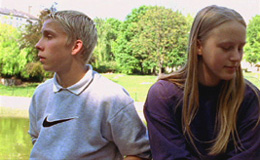 Consequently Mein Stern focuses largely on the actors, on Nicole Gläser’s quiet Modigliani visage; the way she tucks her hair behind her ear; the singular way she disco-dances. And on the many faces Christopher Schöps assumes, while rehearsing a manliness he cannot sustain. Nevertheless it would be wrong to see in this a documentary earnestness, or herald the old chestnut ‘authenticity’. With astute discipline, the director maintains her distance from the actors – literally. Close-ups are only used to register the gap between verbal and mimetic expression. In all other respects, the camera remains in the middle distance, resolutely phlegmatic, panning only when there is no other option.

Grisebach doesn’t adhere to the facile formula that equates the visually and emotionally intimate. She has no need to, her expertise being in listening to others and at letting others speak. Nicole and Schöps are sitting at the table. She would like to know some more about his ex-girlfriends. How the last one was — “different from me?”

– “Everybody’s different”, is Schöps’ evasive disclaimer. And Nicole? What about with her?

Next time they meet, Schöps is feeling uncomfortable: “Something’s not right”, he says.

What’s worrying Schöps and what Nicole suspects – we already have a pretty good idea of.

Gifts – An Interview with Valeska Grisebach

Urs Richter: Valeska, how many younger sisters do you have?

Valeska Grisebach (laughs): I have one younger sister. In fact, just today I was out hunting for a Christmas present for her.

UR: You grew up in Berlin and in 1993 you began studying film in Vienna. Why film and why Vienna?

VG: It had been clear to me, even if only in a diffuse sense, that film would play a role in my life. It was just that I always thought, now is not the time to be going to film school. Initially, Vienna was a sort of chance happening. It all started because a girlfriend of mine was infatuated with the city. Then, I sat an entrance exam and got in. Just in the last three years I have begun finding my way back home, to Berlin.

UR: Considering films by Angela Schanelec and Thomas Arslan, one can almost speak of a “Berliner Schule” (Berlin School), which is turning away from the so-called ‘fun society’ toward a new seriousness. Do you count yourself in this movement?

VG: I really like the films of Schanelec and Arslan. Thus I’m happy if I’m permitted mentally to roam about in their neighbourhood. It is a small miracle that the right people meet at the right time and mutually affect and benefit each other. Though I would also say that we are all very different, even if we profit from one another. There is a need to comprehend such a group as a group publicly. I wouldn’t say that we programmatically represent the same ideas or goals; that would be going too far.

UR: Mein Stern does not treat migrant youth or drug problems or the socially disadvantaged and thus excludes the conventions used to depict tales of adolescence. Why did you withdraw from the customary approaches?

VG: The ordinary and everyday interested me. On the one hand I was moved by the orientation on traditional values, the copying of adult rituals. Of course, there are a lot of dangerous things in the world of the adolescent, but I felt – especially considering the way the cinema spectator is conditioned – I didn’t want to take up the youth culture of drugs etc. The normal, the quotidian interests me. I didn’t want to make a film with any generic statements about youth in the year 2000 but rather to capture a timeless and perhaps even old-fashioned moment.

UR: In the film there are some marvellous moments of dialogue like: “Has anyone ever told you that you’re as beautiful as the seventh wonder of the world?” Did your lay actors come out with such sentences during the casting?

VG: The shooting was a mixture and an adventure. On the one hand you insist upon a certain form and you know a whole lot about what you are doing. And on the other hand you are not so sure. Instead of a complete script, we worked with a draft, which partially looked like a treatment. There was prepared dialogue and there was dialogue provided in large part by the two protagonists, where they gave me a great deal. Some of these gifts I received during the casting and others during the shooting. As for the scenes themselves: the two actors weren’t supposed to learn their dialogue by heart, the text was always hidden. In the dialogue that they knew, there were gaps where I could say: Schöps, please make up a beautiful compliment for her. And that was that. 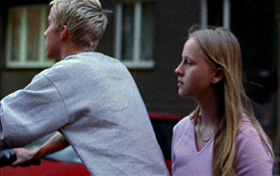 UR: The lifestyle ideals of these characters, the way in which they imagine their relationships, comes across as quite dutiful. Is that something you picked up from the amateur actors, these 15 or 16 year olds? Or did you make this conformism something the film was to take a stand on?

VG: For me what was important was to capture the moment when young people assume adult roles, whether that be in love or elsewhere. Certainly, it touched me during casting, how traditional, one can even say, conservative, such ideals of happiness are. Between the ages of 13 and 18 that undergoes rapid change, ending in the most disparate plans. I am now speaking of things of which I know too little, but I can imagine that at 14 it’s the greatest, the most radical thing to imagine oneself in the “grown-up world”, but perhaps at 16 one already has different dreams.

UR: Are girls more intelligent than boys during puberty? For example, Schöps cannot cope with Nicole telling him about her ex-boyfriends, it obviously makes him feel uncomfortable, although he brought up the topic.

VG: While we were shooting this scene, I thought that Nicole proceeded more like a child, more playfully. She finds it risky talking about her ex-boyfriends, it’s exciting territory she’s stepping into. At the same time Schöps already knew more about the possibility of getting hurt. He also retreated, in the sense of: “Before I get hurt, I’d rather do the hurting”. That’s where it’s getting at, somehow. In the end I had the feeling that she was more courageous than he was. Besides that, I cannot answer the question, I think (laughs), it’s a big mystery.

UR: What did the actors say after the opening night? Do they like their own characters? After all they are named after them.

VG: At first they suffered, they went through the classic incredulity in having to hear and see themselves. Then they got accustomed to the movie. On the one side they are, of course, very familiar with it, because it is “the film”. On the other side they surely expected it to be much more cool. The way the movie was told was at first estranging for them.

UR: Finally, the obligatory question: Can you tell us anything about your next project?

VG: I’m on the trail of something. Recently, I’ve just finished work experience at the Bureau for Unemployment, sitting next to a work placement woman. For the moment I am hunting and gathering. But whether anything will come of it, I can’t yet say. Otherwise, Mein Stern is keeping me busy. When it’s finally off my hands I’ll be able to concentrate on something new.