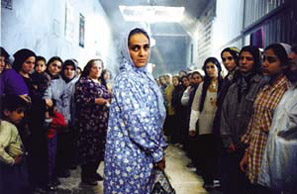 In 2002, a remarkable number of Iranian films focused on the lives of girls and women. This stress on the distaff side across genres signalled a diverting switch from years past when the mere depiction of women characters was subject to stringent regulation. Now, with fewer censorship hoops to jump through, Iranian filmmakers find themselves more able to address issues pertinent to their female viewers. Several films, however, stretch this freedom to its limits. Foremost among them is Women’s Prison (2002), the much-anticipated feature debut of veteran producer, Manijeh Hekmat.

Composed of three segments (set in 1984, 1992 and 2001), Women’s Prison deals with turbulent times in Iranian history and sensitive topics such as crime, corruption, prostitution, drug addiction and homosexuality. A compelling sociological portrait, it also satisfies the conventions of the prison film genre. The story follows the charged (and changing) relationship of Tahareh, the prison’s new chief warden, and Mitra, a one-time student of midwifery now serving a long sentence for the murder of her stepfather. When chador-clad Tahareh starts her job, she is depicted as representing some of the grimmer values of the Revolution. Her goal is to gain control over the unruly inmates and she views non-conformist Mitra as an obstacle to be broken. Mitra is played by Roya Nonahali, who Hekmat calls “a brilliant actress.”

The three segments also depict Mitra’s friendship with a young prisoner whose character represents different strata of Iranian society. All three are played by Pegah Ahangarani, Manijeh Hekmat’s daughter. In the first section, she portrays a political prisoner, coded to be from a wealthy family. As the episode ends, she is removed from the prison in a blindfold, probably on her way to execution. In the second section, she appears as a hard-working innocent from an impoverished background who is raped by another woman. In the last section, she emerges as street-wise Essy, whose birth in the prison we witness in the first segment. Hekmat notes, “The three characters illustrate the changing situation of young people over the past 23 years.”

Teenage Pegah, whose previous film was The Girl In The Sneakers (1999, produced by Manijeh Hekmat), typifies a new generation of young Iranian actresses. Like her peer Baran Kosari (the daughter of director Rakhshan Bani-Etemad), Pegah trained in master classes taught by seminal actress Golab Adineh (star of Under The Skin Of The City, Bani-Etemad, 2001). Proud mother Manijeh says that she and Pegah “had a friendly and professional relationship on the set.” Pegah also accompanied Hekmat during the research phase of the film.

The in-depth research behind Women’s Prison generated one of its most chilling scenes—when the prisoners react to the death sentence passed on drug-addicted prostitute Mahin. Hekmat says soberly,

soon after the Revolution, the red light district in Tehran was totally demolished. Most of the prostitutes were living at that place and many of them were imprisoned, and some executed. The Revolution should have saved these women, but the authorities executed them. Since the executions were held very early in the mornings, we found that prisoners kept vigil through the night, staying awake with the woman who was to be executed.

Although Hekmat has been in the film business for 20 years (as producer, first assistant director and production manager), she faced many problems in making Women’s Prison. “As a first-time director, I had to get a particular permit from the Iranian Society of Film Directors and they denied granting such a permit, although I was qualified for the Society’s conditions.” Eventually, she obtained the permit in the name of her husband Jamshid Ahangarani (the film’s art director). Financing, too, was a big barrier. “On the one hand, nobody dared to finance my project, and on the other hand, I never agreed to reduce the quality of my movie for financial reasons.” Ultimately, she financed it herself, with producer Sirius Taslimi joining her mid-shoot.

We could not build a jail as a set because of our tight economic situation. Therefore, we had to convince the authorities to let us work at real jails. We referred to the Judiciary authorities and they immediately rejected our proposal. I was not disappointed at all and I had 42 different meetings with authorities in three months and eventually I got the jail.

The prison setting she used is part of a very well-known and still active Tehran prison built at the time of Reza Shah. The shoot took 75 days. “Everyday, at 6 a.m., when I was turning from the main street toward another street where the prison is located, I was quite concerned to see my crew behind the closed ports of the prison and I had this nightmare of being deprived of the location all the time”.

Ironically, Hekmat almost found herself on the wrong side of the prison bars in February. When her controversial film was excluded from Tehran’s 2002 Fajr Film Festival, many foreign guests clamoured to see it. She was threatened with arrest if she dared to arrange a private screening. Ultimately, tapes of the film made their way to selectors from various international film festivals and the director’s cut of Women’s Prison made its world premiere in competition at the Venice Film Festival in September 2002.

With pressure from reformists in the Iranian government and support from many members of the Majlis and President Khatami himself, a censored version of Women’s Prison finally opened in Tehran on August 7, 2002. In spite of not being allowed to have television teasers, the film set new box office records for an opening in the post-Revolutionary era.