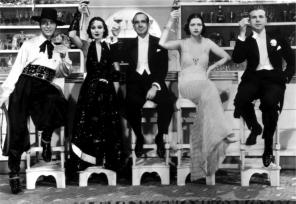 Wonder Bar is a sterling example of Classical Hollywood cinema’s late, ‘decadent,’ so-called Pre-Code phase which occurred in the short run-up to the stricter imposition of a revised and strengthened Production Code in July 1934. Other significant films emerging from the studios at the time included such baroque – even perverse – works as The Black Cat (Edgar G. Ulmer, 1934), The Scarlet Empress (Josef von Sternberg, 1934), Mandalay (Michael Curtiz, 1934), Blood Money (Rowland Brown, 1933) and Murder at the Vanities (Mitchell Leisen, 1934). At virtually every level of its narrative and mise en scène, Wonder Bar, like these other films, affronted the standards of good taste and conventional morality inscribed in the 1930 Production Code which was in effect at the time the film was made in November and December 1933. For that reason, Bacon and Berkeley’s collaboration was, and still remains, one which flirts with transgression, and stupefies and delights in equal measure. Moreover, the film combines 20th century elements (Art Deco styling, jazz and tango music, liberated sexual mores, and a non-moralizing narrative resolution) with modes of popular entertainment more associated with the 19th century (vaudeville, Yiddish “tummler” tradition, waltz music, and black-face performance). Wonder Bar is both modern, even socially progressive, in ways that provide a frisson of pleasure for its audacity, as well as retrograde, in ways that make us cringe in embarrassment for its completely misguided ambitions.

It was considered by contemporary audiences to be yet another triumphal entry in the popular series of Depression-era musicals produced by that most pro-New Deal studio, Warner Brothers (e.g. 42nd Street, Footlight Parade, Gold Diggers of 1933). This series married broad comedy, helmed by such contract directors as Mervyn LeRoy and Lloyd Bacon, with extravagantly cinematic musical numbers conceived and directed by Busby Berkeley. Unlike its predecessors, however, Wonder Bar‘s European setting freed the studio from their previous musicals’ immersion in the New York proletarian and showbiz milieu, enabling the filmmakers license to depict the amoral high life of Parisian nightlife. The film’s amorality challenged the official overseers of content at the Studio Relations Committee, recently headed by Joseph Ignatius Breen (to be renamed the Production Code Administration in mid-1934). By simply not responding to the Committee’s objections, studio head Jack Warner unleashed Wonder Bar on the market in the spring of 1934. Even in script stage, the SRC objected in particular to the “irregular sex relationship” between Harry (Ricardo Cortez) and Ynez (Dolores del Rio), discerning in it strong intimations of sadomasochism, which became overt on screen. (1) As Mark Vieira also relates, the musical number “Goin’ to Heaven on a Mule” was not even shown to the SRC, since executive producer Hal Wallis assured the Committee that “there was nothing to worry about” in this and another musical interlude. (2)

This now notoriously extravagant ‘tribute’ to African-American culture serves as a key illustration of the laxity of official overseeing and governance of content in Hollywood films before the middle of 1934. No doubt entirely defensible to its creators, this long musical number climaxing the film is only different in degree to the many ways in which mainstream American popular culture appropriated black culture and distorted it through a racist lens which was ostensibly ‘affectionate.’ As Eric Lott argues, “blackface minstrelsy has seemed a form in which transgression and containment coexisted, in which improbably threatening or startlingly sympathetic racial meanings were simultaneously produced and dissolved.” (3) Thanks to his performance in The Jazz Singer (1927), Al Jolson was associated with blackface performance traditions originating as far back as the 1830s. This number was a kind of apotheosis of Jolson’s blackface star persona, but Berkeley also intended the number to be a fashionable reflection of the Harlem Renaissance’s verve, as well as a utopian vision of material plenitude for deprived Depression audiences, regardless of their racial-ethnic identity. While we find the grotesque elaboration of racial stereotyping in the number appalling today, Wallis and Lord also must have known, deep down, that the unfettered breach of taste inherent in the number wouldn’t fly past the SRC, hence their unwillingness to screen it for the Committee. (4)

Wonder Bar also crystallizes a trend, existing for the duration of the Pre-Code era, in what the showbiz rags like Variety nicknamed “panze humor.” Aside from the now well-known gag involving Jolson and two men on the dance floor early in the movie (5), homosexual characters are consistently stereotyped as tailors (as they are routinely in Warners’ films dating back at least as far as William Wellman’s Public Enemy, made in 1931). This stereotype even makes it into “Goin’ to Heaven on a Mule,” possibly serving as a testament to its warped impulse for inclusive social representation. In general, Wonder Bar depicts a panoply of non-normative sexual identity and behavior, in flagrant violation of the 1930 Production Code, which specified: “The sanctity of the institution of marriage and the home shall be upheld. Pictures shall not infer that low forms of sex relationship are the accepted or common thing.” (6) Jolson’s musical number “Vive la France,” by stereotypically displacing such “low forms” onto a country with a well-established reputation for sexual license, rhetorically asks husbands “why do you leave your wives at home?” to come to France, “where kissing lasts much longer.” The hilarious subplot involving Mrs. Pratt and Mrs. Simpson, who weren’t left at home, expands the scope of the question raised by Dubin and Warren’s witty song by depicting middle-aged female friskiness in “gay Paree.” Obsessed as it is with marital infidelity, the commodification of sex (with innocent, but tipsy, Babbitt-like American provincials especially susceptible to predatory ‘gigolos’ and ‘belles de nuit’), and ‘perverse’ gay male and straight sadomasochistic relations, Wonder Bar is a wonderfully prurient movie. Yet its prurience is, contradictorily, coupled with a general refusal to moralize in any serious way. The film is content to satirize instead – which is, ultimately, even more effective at reinforcing norms which the film delights in simultaneously contravening.

But the mere representation of loosened sexual mores was enough to flout the 1930 Production Code, which also explicitly stipulated standards for “Crimes Against the Law.” Wonder Bar‘s most transgressive aspect involves the disposition of cases of homicide and suicide; both are neatly ‘resolved’ by pushing a car over a cliff and making both acts seem like a single accident. The Code insisted that crimes “shall not be presented in such a way as to throw sympathy with the crime as against law and justice.” (7) But Ynez’s passionate and fatal stabbing of Harry in their whip dance is deemed necessary since Harry is the villain of the piece, and it goes unpunished. Indeed the crime is concealed from the ineffectual forces of law and order (which can be distracted by a single bottle of wine) and the criminal impulses of the hot-blooded offender (del Rio’s Mexican origins being exploited for the role) are seemingly reformed by the adoration of an archetypal peppy American ‘go-getter’ (played by Berkeley stalwart Dick Powell). Captain von Ferring’s intended suicide is never prevented, merely pooh-poohed, and is never subjected to the kind of condemnation as a mortal sin articulated by the 1934 Production Code revision, which was fostered by the American Catholic Church and its lobbying organizations such as the Catholic Legion of Decency.

A fascinating and repellent mélange of a number of popular entertainment traditions from both the stage and cinema, Wonder Bar remains a limit text of what the Hollywood studio system could and would do in the face of inconsistent official oversight at a time when the gathering forces of organized morality were gaining strength to control more effectively the content of American cinema.