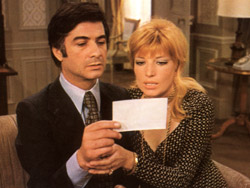 Coincidence is the great master of things. I feel a special tenderness toward The Phantom of Liberty, perhaps because it tackles this difficult theme.

The Phantom of Liberty is one of the most audacious and unconventional films in cinema history. Directed by Luis Buñuel, The Phantom of Liberty may very well be the most accomplished, ambitious and surrealist work of his 54-year film career. Indeed, this is a film that comprehensively challenges traditional narrative conventions. At the same time, the film deals with a variety of transgressive subjects and presents an intense criticism against established social institutions. It is a complex, paradoxical, subversive and radical film, which has promoted endless debates and encouraged a variety of readings.

A devoted surrealist, Buñuel acknowledged in his films the presence of potent subconscious forces, of a violent and sexual nature, that reside inside all human beings. (2) His films, and in particular The Phantom of Liberty, show how these forces, which represent the true human nature, are repressed by moral, religious and social codes. In The Phantom of Liberty, there are virtually no social institutions left untouched by Buñuel’s ironic and surreal criticisms. The police and the schoolteachers fail to notice an allegedly missing girl, who is directly in front of them all the time. Some religious monks play a game of cards and they wager with an assortment of religious artifacts. The army is engaged in hunting foxes, using an armored tank. A physician offers a cigarette to a patient whom he had just diagnosed with pulmonary cancer. The judicial system leaves a mass murderer free. Finally, the bourgeoisie is portrayed as fetishistic, incestuous and ultimately so far removed from reality that they suffer bizarre hallucinations. In Buñuel’s surrealist world, society is comprised of irrational, oppressing and decadent institutions.

The Phantom of Liberty is an extremely complex film. It has more than 60 speaking parts and features characters from two historical periods (the Napoleonic Wars to the present day). It deals with a variety of transgressive themes such as fetishism, necrophilia, incest, mass murder, sadomasochism, and pedophilia. No less important, this film relies on a variety of storytelling devices and narrative forms, such as narrative painting, the gothic tale, the incest story, the letter, the dream, the flashback, the omniscient narrator, and the horizontal wipe. (3)

Nevertheless, the most striking feature of The Phantom of Liberty is its unconventional narrative structure. The film comprises roughly 12 distinctive episodes with separate protagonists. These episodes are linked together in a unique way. For example, the film opens with some events that take place at the time of the Napoleonic Wars. Then, we discover that a nanny is reading these events from a book. The nanny works for a bourgeois gentleman’s family, who is having hallucinatory dreams. He in turn, goes to see the doctor, whose nurse has to go to see her dying father. On the nurse’s way to her father’s home, she encounters other characters and the storyline continues like this until the very end. The Phantom of Liberty resembles a relay race, where the narrative’s center of attention is passed, baton-like, from a character in one sequence to a character in the next.

As Buñuel stated in the quote that opens this essay, coincidence is the driving force of The Phantom of Liberty‘s narrative. It is true in this film that the evolution of the narrative depends on the ‘coincidental’ encounters between the many characters. If two consecutive characters had not met, we would have a very different film, most probably following different protagonists in other situations. The apparently liberated structure of the film is actually subjected to the tyranny of coincidence, which is usually regarded as a purely random event. Therefore, as Michael Wood suggests, the threat presented by the film is the issue of living in a random world without a specific purpose in life. (4)

The extremely unconventional narrative of The Phantom of Liberty has been extensively studied, discussed, and analyzed by several authors. Susan Suleiman, for example, considers the film’s narrative to be mainly made up of coherent connecting sequences, which do not make a complete and consistent story (as the term ‘story’ is traditionally understood). (5) Suleiman concludes that the structure of the narrative is similar to schizophrenic thought, and that the film is a linear narrative by means of the excessive and exaggerated linearity of each constitutive segment. Marsha Kinder, on the other hand, considers the circularity of the narrative established by the film’s conclusion. (6) By using the concept of the phallus, Reynold Humphries discusses how the film continually reverses the expectations of the viewer. (7) Carlos Clarens identifies the narrative structure with the concept of ‘death.’ (8) Finally, James Tobias tries to provide a unified view of previous readings by considering The Phantom of Liberty as a “maximally free” or “impossible” narrative, which is structured as a series of interconnecting narrative networks. (9) This approach allows for viewer-dependent readings, which do not contradict each other.

Besides having an unusual narrative construction, The Phantom of Liberty has a distinctive thematic structure. Each sequence is so uniquely constructed, and so full of subtexts, that they provide fertile ground for analysis and discussion on their own. Nevertheless, there is a common, unifying theme that permeates the narrative of this film.

The Phantom of Liberty seems to take its title from the opening line of Karl Marx’s Communist Manifesto. (10) However, this film is neither about Marx nor Communism. Instead, it presents how freedom is a ghostly entity, which seems to be at hand, but is always ethereal and unreachable. Buñuel showcases the severe limitations of human freedom in a world full of seemingly arbitrary social codes and norms. (11) The arbitrariness of these conventions is overtly showcased and ridiculed in the scene where a well-dressed couple arrives at a party. Surprisingly for the viewer, all the guests are sitting on toilets around a table. At some point, one of the guests excuses himself from the table and goes to a private room, where he is served dinner. Both, defecating and eating, are natural human functions, but one of them is shunned by society.

The characters in The Phantom of Liberty seem to be completely free, and it is this unbound independence that leads to an irrational society, comprised of oppressing and decadent institutions. These institutions, in turn, obliterate the apparent freedom of the characters. Paradoxically, the characters’ unrestrained freedom ends up enslaving them. (12) Consequently, freedom is presented as a concept as absurd and surrealistic as the images presented in the film. The Phantom of Liberty is a very complex film, rich in detail and symbolism. The surrealist images range from the comical to the profane, from the rational to the absurd, and from the ambiguous to the poetic. The film questions our perception of freedom. However, as with all great artists, Buñuel did not provide any answers, he just posed the questions. This film is likely to leave the viewer in doubt, thinking about its meaning and trying to decipher its intricate iconography. As with many great films, The Phantom of Liberty stays with the viewer long after its ending.