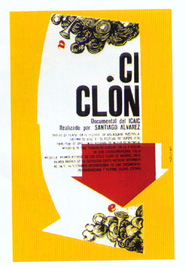 It is no slight irony that Santiago Alvarez first appeared on the radar of world cinema under the force of a hurricane. Ciclon (1963) was the first Cuban film to be recognized beyond the shores of the island itself. Alongside the key achievements of the Cuban new wave, it may appear to our eyes a rather slight document. Yet it would be an error now to revise Ciclon‘s importance downward. Alvarez was the pioneer of Cuba’s revolutionary cinema: the first to produce works of inarguable importance, the first to exhibit them widely abroad. The early films of Santiago Alvarez alerted the world to something vital gestating in the corridors of the ICAIC (the Cuban film institute). And Ciclon was, in a quite literal sense, the turning point in his expansive career.

Alvarez was born in 1919 in the working-class barrio of Colon in Old Havana. His early childhood was moulded by the imprisonment of his father on charges of anarchism. While still in his teens, Alvarez was compelled by his family’s needs to leave school and begin working. A dearth of options in 1930s Cuba soon forced him to migrate north in search of a job. Working first as a dishwasher in New York, and later as a coal miner in Pennsylvania, his years in the United States would prove to be the unlikely catalyst for his life-long radical outlook. With the outbreak of WWII, he returned to Cuba, and soon joined the ranks of the Communist Party. While working as a music librarian for radio and television, he intensified his political activity. Alongside the future key figures of the new Cuban cinema (including future ICAIC chief Alfredo Guevara, and the filmmakers Tomas Gutierrez Alea and Julio Garcia Espinosa) he began to attend the semi-clandestine film screenings organized by the Nuestro Tiempo group. (1) By the time of the triumph of the July 26th movement on New Year’s day 1959, Alvarez had become a trusted political ally of the victorious movement. Surprisingly, it was precisely this measure of trust that would ultimately afford Alvarez the opportunity finally to fulfil his unspoken ambitions.

The first cultural decree of the revolutionary government resulted in the founding of the ICAIC. In 1959, several foreign newsreels still operated in Cuba, creating and exhibiting films that betrayed an unmitigated hostility to the young Revolution. Among the ICAIC’s most pressing priorities was the creation of a regular newsreel favorable to the ongoing political and economic transformations. From these purely utilitarian beginnings, Noticiero ICAIC was born. Because of his political fidelity, Alvarez was appointed temporary director of the newsreel. He had no training whatsoever, nor had he worked on a single film. He was also 40 years old. By the time of its final discontinuation amidst the economic woes of “the Special Period,” Alvarez had directed more than 500 instalments and supervised the production of some 1000 others. (2) As the sole director of Noticiero ICAIC during its long and celebrated history, he transformed the pedestrian newsreel into a dynamic factory of radical innovation. Even his comrades at ICAIC were unprepared for what he would achieve. Alfredo Guevara would later admit, “We simply knew he was energetic and could be trusted. It never even occurred to us that he might have talent.” (3)

The unique temporal and material conditions of newsreel production would operate as a highly accelerated film education. As he would later put it, “I learned the job fondly handling millions of feet of film.” (4) The demands were daunting to say the least. He was assigned to produce a film every week, each addressing some or other aspect of the rapidly changing Cuban society, as well as its connections to global events. The earliest examples of the Noticiero were merely functional, created according to the existing codes of the common newsreel.

Alvarez quickly grasped that the existing conventions were utterly inadequate in describing Cuba’s daily reality, then in perpetual motion. He later described the precise moment he would commence his experimental trajectory:

I used to imitate the old style [of newsreels]. But within a few weeks I found that very boring…. Then I had to cover the funeral of a famous and popular Cuban musician [Benny Moré] whom I had known very well and loved very much. I was very moved by the occasion. And I thought that I would take a great risk. His music was always very happy, not solemn at all. But I illustrated the pictures with it instead of the dirges we know so well. It was a revelation – my personal discovery of the importance of sound. I have never forgotten the lesson. (5)

Undertaken weeks later, Ciclon afforded the opportunity to broaden and amplify the lessons learned from the earlier newsreel. The film, which itself began as a standard newsreel, documented the devastation wrought by Hurricane Flora upon the eastern provinces of the island, as well as the vigorously coordinated response of the energetic young regime. The film is by no means among his most enduring. Yet it remains the first of his longer films to manifest traces of nearly all of his key signatures. The film is at once informative and poetic. It displays a bold graphic style. It matches sound to image in provocative pairings. Some sequences are joined by nothing but silence. It fuses new live footage with found materials in an effective harmony. It uses all of the means at its disposal.

Indeed, one is struck by the manner in which the film, in a linear order, retraces the very path of his creative development. It begins with a traditional voiceover, delivered with typical authority. This voiceover soon gives way to an altogether different form of narration, conveyed through the sharp interplay of intertitles, images, music and silence. It is always exhilarating to witness an important artist first discovering his voice. Ciclon represents precisely this moment for Santiago Alvarez. As the film unspools before our eyes, it’s as if he’s uncovering (for himself most of all) his eventual style. He’s become an altogether different artist by the film’s closing images than the one we encounter in Ciclon‘s opening frames.

The films that followed would confirm this subsequent reading. Within two years he had created the first of his masterpieces: the stunning (and very brief) Now (1965). Cerro Pelado (1966) would follow closely on its heels. A handful of months would expire before the appearance of a film that would indisputably confirm his position within the history of the medium: Hanoi, Tuesday the 13th (1967). Thanks to the restless efforts of this unlikely cineaste, the world would now be forced to take notice of the new Cuban cinema. An awareness that would soon be rewarded by the appearance of the dazzling films of its golden age.