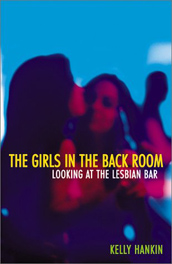 This book explores the representation of lesbian bars across various genres of film and in popular US television series. A book-length study of this specific locale, which has made brief appearances in a handful of mainstream films, television episodes and low budget documentaries, initially struck me as a rather obscure, albeit intriguing, inquiry. Yet Hankin quickly reveals the broader cultural significance of this topic in the first chapter by demonstrating the “remarkable trans-historical continuity”(p. 3) that popular cinematic and televisual representations of lesbian bar culture have with their historical precedents in popular literature. Arguing that such representations foreground co-option and control by heterosexuals, she goes on to analyse contemporary cinema’s fascination with the lesbian bar then, in Chapter Two, further supports her claims with a detailed case study of the production history of the first mainstream cinematic depiction of a lesbian bar (in The Killing of Sister George [Robert Aldrich, 1968]).

While the first section of The Girls in the Back Room traces the recurring ideologically-driven themes that inform lesbian bar representations in the commercial media, in the second Hankin turns her attention to alternative film and video production by lesbians and/or directed at lesbian audiences. In Chapter Three, she looks at the production of oppositional readings of mainstream representations of gender, sexuality and race through a close textual analysis of Etang Inyang’s experimental video Badass Supermama (1996)—a work that performs ‘celluloid surgery’ (p.83) on a lesbian bar scene from Foxy Brown (Jack Hill, 1974). Finally Hankin compares four low-budget documentaries produced by lesbians about aspects of lesbian bar culture in the United States, arguing that heightened interest in this subject within queer filmmaking in the early to mid-’90s points to the “continuously vexed relationship of lesbians to the public spatial realm”(p.115).

As an iconic masculine space in Westerns, Film Noir and other classical Hollywood genres, the cinematic bar has traditionally been a locale where the presence of women is problematised. Women who frequent bars in these genres are narrowly coded as ‘fallen’, ‘deviant’ or sexually promiscuous, transgressing conventional gender expectations. As Hankin states, the bar stands as “one of the central locations through which films tell ideological stories about the relationship of gender and sexuality to space”(p. x). Doubly transgressive because of its usurpation of a space usually reserved for homosocial bonding and its domination by women with non-normative sexualities, the lesbian bar has provided rich source material for representing sexual identity in the public sphere.

While the first depiction of a lesbian bar in mainstream American cinema did not occur until 1968 with the release of The Killing of Sister George, and it was seen only on rare occasions during the ’70s and ’80s, by the ’90s it was a common motif in both film and television. Films such as Henry and June (Philip Kaufman, 1990), Basic Instinct (Paul Verhoeven, 1992), Boys on the Side (Herbert Ross, 1995), The First Wives Club (Hugh Wilson, 1996), Bound, (Wachowski Brothers, 1996) Chasing Amy (Kevin Smith, 1997) and Living Out Loud (Richard LaGravenese, 1998), and television series including Roseanne, Ellen, Law and Order, Xena: Warrior Princess and Sex and the City have all featured scenes central to the narrative thread that are set in lesbian bars. Hankin places these contemporary representations in an historical context by surveying written descriptions of lesbian bars that take the various forms of academic accounts, pulp fiction and semi-factual, sensationalist exposes that appeared between 1940 and 1970. In the process she reveals a “stubborn persistence of conventions”(p.3) that link these earlier accounts with more recent visual representations.

Hankin identifies a number of recurring themes in popular representations of the lesbian bar that she claims contribute to the ideological project of heterosexual surveillance, control and consumption of public space claimed by lesbians. These include an emphasis on narratives of illegality, the portrayal of lesbian characters as sexually available to straight men and women, and the use of the lesbian bar and its patrons as a device to further the emotional trajectory of heterosexual characters. A further convention noted by Hankin that works to increase the verisimilitude of lesbian bar representations and naturalise the ease with which heterosexuals move through lesbian bar space is an obsession with authenticity.

Unlike other commonly referenced spaces on film and television, such as hospitals or police stations, authenticity in this case is not related to the achievement of aesthetic realism. Rather, this “compulsion to authenticate”(p.22) functions voyeuristically by presenting documentary evidence of a sub-culture that otherwise falls below the radar of mainstream heterosexual public culture. Hankin’s fascinating study of the production history of the lesbian bar scene in The Killing of Sister George, which Aldrich insisted on filming on location in an actual lesbian bar in London despite the fact that the rest of the film’s interior scenes were shot on the soundstage of his new Hollywood studio, exposes the homophobic roots of this impulse in the exploitation genre of film and literature.

While it comes as no surprise that mainstream representations of lesbian bars reinforce hetero-normative visions of sexuality and space, Hankin’s identification and tracking, in the first half of the book, of the particular ‘ideological stories’ (p. x) that circulate ad infinitum, is both insightful and thorough. Yet, as Hankin stresses in her introduction, despite their potency, not all viewers will buy such depictions or respond to them in the same way. Her attention to lesbian produced alternative media in the second half of the book aims in part to address the complex responses that lesbian spectators have to such images. Like much recent cultural studies scholarship on popular media forms, Hankin is at pains to find a balance between theories of ideological effect on the one hand and spectatorial agency on the other. For her, the value of Inyang’s video work Badass Supermama, in which the videomaker explores her desires and identifications as a black lesbian cinefile to interrogate the racial and sexual politics of blaxploitation films, lies in its “attention to both the agency of the spectator and the force of the image”(p.110). She concludes from her analysis of Inyang’s film that even while lesbian viewers are performing oppositional or resistant readings on popular representations of the lesbian bar they are also usually complicit to some degree with the ideologies such representations promulgate.

While I understand Hankin’s demand that we continue to pay attention to the ideological power of images and their influence on spectatorial positions as a corrective to making overblown claims for the active audience, her conclusions in this chapter leave little room for lesbian viewers interacting with popular cinematic and televisual texts to move. By referring exclusively to Badass Supermama to frame her discussion of lesbian spectatorship, Hankin limits the degree to which she can explore complex or ambivalent responses that may not be categorised as either complicit with or resistant to dominant ideological messages. The assertions she makes in this chapter beg to be tested by returning to the texts she analyses in the first half of the book to consider the pleasures and displeasures that lesbians may draw from a hetero-normative visions of sexuality and space.

In her discussion of lesbian made, low-budget documentaries aimed at a lesbian audience in the final chapter of the book, Hankin concludes that while they may construct nostalgic and romantic histories of lesbian bar culture, such representations are valuable because they address “utopian desires for a place we hope to have, a place that ‘can and perhaps will be’”(p.155). I would argue that mainstream representations of lesbian bars can also evoke such utopian longings in lesbians which can be enjoyed in ways that do not involve complicity with their ideological intent. While lesbian bar spaces may function in mainstream popular representation primarily as exotic locales which further heterocentric narratives, lesbian viewers can and do derive pleasure from the fact that they have a presence on the screen and an ongoing life that can be imagined beyond the demands of the plot.