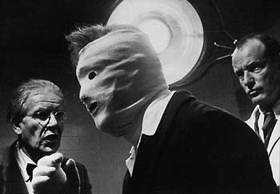 Seconds (John Frankenheimer, 1966) is a disturbing film to watch. With its unresolved, horrific ending, it’s possibly one of the most depressing films ever made. (Blinder, 212) Essentially based on the premise that a part of everyone’s life is unfulfilled and that we all have a “key unturned” (Blinder, 213), Seconds focuses on the hallucinatory nightmare of Arthur Hamilton (John Randolph), who takes dramatic and desperate action to fill the empty void in his life. He undergoes plastic surgery to alter his physical appearance in the mistaken belief that this will also improve his psychological well-being. However, Hamilton makes the fatal error of turning the key and changing his identity to Tony Wilson (Rock Hudson) without knowing what he is looking for on the other side of the door. (Blinder, 213) What Hamilton does discover when he becomes Tony Wilson is a world that is just as disillusioning and constricting as the one he has left behind.

Seconds upset a lot of people in its day, its unsettling and disturbing subject matter possibly striking a little to close to reality for many viewers, both critics and public alike. Additionally, there may have been other reasons why Seconds failed so miserably at the box-office in 1966. It contains a perplexing mixture of disparate elements that don’t quite gel as a whole. Part psychological horror film, part science fiction film (with the theme of transformation through plastic surgery), and part “search-for-one’s own identity” film which gained prominence in the late 1960s and early 1970s, many viewers (then as now) would find Seconds hard to categorize as belonging to one specific genre. Moreover, in 1966, many viewers were unwilling to see a film with Rock Hudson (who had made a successful career as a romantic Hollywood leading man), play a very atypical character like Tony Wilson. (Blinder, 212)

When Seconds was released in 1966, 36-year-old John Frankenheimer was a member of the new breed of directors trained in the medium of television (Sidney Lumet being another notable example). Through his work in television drama, he had developed a complex and visually innovative style for the big screen, beginning with The Young Stranger (1959) and then progressing with an impressive array of features including: The Young Savages (1961), All Fall Down (1962), The Birdman of Alcatraz (1962), Seven Days in May (1964), and The Train (1965). Also, of particular importance in relation to Seconds was The Manchurian Candidate (1962), a political thriller which focused on the mind of a brainwashed man. This film combined a plot that centred on paranoia, with the creative use of baroque black-and-white photography and elaborate production design (LoBrotto, 99) that was to provide Frankenheimer with a visual and narrative framework for his later work on Seconds.

Seconds was based on a novel by science-fiction writer David Ely. Both the novel and the screenplay by Lewis John Carlino had a surreal quality, which suggested an extreme visual approach to Frankenheimer.

Perhaps Frankeheimer’s most important directional decision with Seconds was his request that James Wong Howe act as director of photography. Howe was the ideal choice to visually realize Frankenhiemer’s ambitious and surreal vision in Seconds. One of the great cinematographers, Howe had a wealth of impressive credits stretching back over a fifty-year career. These included: Body and Soul (Robert Rossen, 1947) and the incomparable Sweet Smell of Success (Alexander Mackendrick, 1957), as well as the Academy Award for Best Black-and-White Cinematography for his superlative work on Hud (Martin Ritt, 1963). Although he was in his mid-sixties when he worked on Seconds, Howe always sought to bend the rules and express a story in vivid visual terms (LoBrutto, 100).

Most importantly, the theme of distortion is central to Seconds. This theme is considerably enhanced by Howe and Frankenheimer’s experimentation with a 9.7 mm fisheye lens. (LoBrutto, 100) The camera is used not only as a recording device, but also as an expressive tool. Through distortion and exaggeration, Howe and Frankenheimer attempt to reveal the mind of a man who is struggling to break free of his emotional straightjacket. (LoBrotto, 103) This theme is immediately evident from the ominous opening credits by noted graphics designer Saul Bass, an extreme close-up of a man’s distorted face (presumably Hamilton’s) (LoBrotto, 100), overlaid with Jerry Goldsmith’s wonderfully eerie and disquieting score. Frankeheimer elaborated on this theme of distortion a few years after the film was released:

In Seconds, the distortion was terribly important. The distortion of what society had made this man, what the Company then turned him out to be, and finally when he was going to his death, everything had to be that complete distortion of reality and the fact that it was all just utter nonsense. Not the film, the irony of it. (Prately, 145)

A perfect example of this distortion of reality is displayed in a sequence created by production designer Ted Haworth. After Hamilton is drugged by the Company, he dreams of molesting a young woman in a bizarre bedroom chamber. Frankenheimer wanted this drug-induced hallucination to be “almost psychedelic”, a physically and optically distorted perspective, with the floor undulating beneath black-and-white checkerboard tiles. Haworth’s brilliant sets, combined with Howe’s innovative cinematography, creates a surrealistic, discomforting, and stomach-churning effect (LoBrotto, 101). 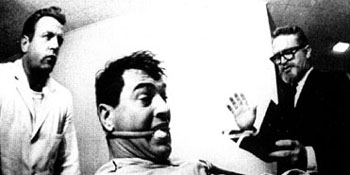 Seconds certainly has its weaknesses and has been criticized over the years for trying to convince audiences that John Randolph (as Arthur Hamilton) could emerge after plastic surgery in the guise of Rock Hudson (as Tony Wilson). Frankenheimer acknowledged this potential difficulty: “We knew we were going to have a terrible problem getting audiences to believe that the man who went into the operating room to have plastic surgery could emerge as Rock Hudson”. (Prately, 143) Possibly, the use of an unknown actor in place of Hudson may have made for a more convincing Tony Wilson. However, the real weakness with Seconds is the exploration of Wilson’s character in the second half of the film. Frankenheimer later admitted: “I think the problem with the film was that we had no second act. In other words, we didn’t make it clear why he didn’t enjoy his new life. If the second act had been more successful, then the transition between John Randolph and Rock Hudson would have been smoother and less noticeable”. (Prately, 143) The first half of Seconds is intense and tightly scripted, achieving a delicate balance between Frankenheimer’s creative and ambitious vision, and Howe’s experimental and distorted camera work. In the second half of the film, this delicate balance begins to falter. Several scenes veer towards self-indulgence, with clumsy and meandering direction from Frankenhiemer, and unnecessarily overwrought camera work by Howe.

Two scenes exemplify this over-indulgence. The first scene takes place after Arthur Hamilton (now Tony Wilson) is relocated to Malibu where he encounters Nora Marcus (Salome Jens), an appealing woman who turns out to be a Company employee (these initial scenes between Wilson and Nora are perplexing and poorly conceived). Nora then attempts to break down Wilson’s straight-laced middle-class inhibitions. They both end up cavorting inside a large wine vat, mingling with other revelers (mostly uninhibited non-actors on hand for the festivities), stomping grapes and celebrating their nudity and free spirits (these scenes were actually shot at the Feast of Bacchus, a festival held every year in Santa Barbara, California). (LoBrotto, 103) Frankenheimer has stated that he wanted this scene to display the cathartic “freeing up” of Tony Wilson, (Prately, 148) a concept which does have merit. However, although initially entertaining, the execution of this scene by Frankenheimer and Howe is over-emphasized and prolonged, eventually becoming more of a comical farce, than a genuine moment of liberation for Wilson.

The second scene takes place at the cocktail party that Wilson holds for his neighbours (actually Frankenheimer’s own private beachfront home). During the festivities, Wilson, in a drunken stupor (Hudson was actually intoxicated during this scene) alludes to his secret past, much to the growing displeasure of several guests whom he learns are, like him, fellow Company “reborns”. (LoBrutto, 102) This scene is overlong and clumsy. Howe’s camerawork is so over-stylized that it aptly demonstrates what a fine line it is between creative and innovative cinematography and overwrought self-indulgence.

However, it must also be noted that one of the most poignant and emotionally heart-wrenching scenes appears towards the end of the film. Wilson, in a desperate and futile attempt to re-connect with his “past life”, returns to his old home and former wife. This scene between Hudson and Frances Reid (Emily Hamilton) is beautifully played by both actors. With controlled and expressive camerawork by Howe (in particular, the finely detailed close-up of Wilson’s hands), overlaid with Goldsmith’s melancholy score, this scene manages to be simultaneously sad, touching, and surreal.

In spite of its obvious weaknesses, Seconds is an extremely complex, innovative, and ambitious film. It paints a frightening picture of a dehumanised and controlling world. (Prately, 134) What happens to Hamilton in his second life and how he comes to realise too late how he ruined his first one (due to the frantic race for self-advancement and materialistic gratification) is the essence of Seconds. (Prately, 135) As Arthur Hamilton/Tony Wilson bitterly remarks to his old friend and fellow “reborn” Charlie Evans at the end of the film: “I had to find out where I went wrong. The years I’ve spent trying to get all the things I was told were important. That I was told to want. Things, not people or meaning, just things. California was the same. They made the same decisions for me all over again, and they were the same things really.” Finally, the tragic and horrifying ending comes for Arthur Hamilton/Tony Wilson when he is pushed, kicking and screaming along the sterile corridors of the Company headquarters into the operating room, this time never to re-emerge. (Prately, 139) Frankenhiemer himself provided a chilling epitaph to the fate of Arthur Hamilton: “When we talk about life my philosophy is that you have to live your life the way it is. You can change it but you can’t change who you are or what you’ve done before. And you have to live with that. I think that point was very well brought out in Seconds, that’s what the film is all about”. (Prately, 148)

The disturbing themes that resonate throughout Seconds – the consequences of the frantic and self-absorbed pursuit of self-advancement and materialism; the dire warning that a desire to improve one’s physical appearance with the use of modern technology (e.g., plastic surgery) won’t automatically improve one’s psychological state – are even more valid and relevant today than they were when Seconds was released in 1966.