The Montreal World Film Festival (August 23rd to September 3rd, 2001) offered a cozy low-stress complement to the high-powered frenzy of the Toronto International Film Festival that followed a week later. The Festival district in the heart of downtown Montreal served as a gathering point within the city itself, hosting musical and theatrical events, and including rows of tents housing book and music vendors. The open-air concerts of Emir Kusturica’s “No Smoking Orchestra” drew throngs that filled the city square. Even indoors, one got the sense that this was an event that belonged more to the general public than to the industry, the press or even film buffs.

This 25th edition of the Festival featured over 200 films. In addition to the customary Official Competition, World Greats, World Cinema, Cinema of Tomorrow, and Canada programmes, there were special tributes to German and Latin American cinemas, Sophia Loren and Francisco Rabal (whom the film world lost just days later). The Festival jury was headed by Emmanuelle Beart. Though recognizable names were not in short supply (new films by Godard, Breillat, Scorsese, Ming-Liang, Gitai, Hermosillo, Kusturica, Miéville, Ruiz, Wertmuller, and Scola, among others), the defining characteristic of the films that I saw here was their modesty. If bold stylistic experimentation was not generally the order of the day (as it might have been, for instance, in a typical Rotterdam programme), the offerings at Montreal endeared themselves to us by their quietness and smallness of scale.

A few recollections then, in capsule form.

Written On The Body Of The Night (Jaime Humberto Hermosillo, Mexico, 2001)
A delightful comic melodrama and billet-doux to cinema from one of Mexico’s best directors. Hermosillo was also on the jury at the Festival and the subject of a recent Cinémathèque Quebecoise retrospective in Montreal. The film begins with a director premiering his new autobiographical film about his family. Following the premiere, instead of joining his friends at the after-party, he is moved to visit the apartment he lived in as a teenager. This visit triggers a series of flashbacks, which fill the remainder of the film and consist of memories of his youth spent with a frighteningly neurotic mother, a steely though wise grandmother, and their voluptuous tenant, who is clearly using a pseudonym (Adele H.). Being in love with movies (he begs his grandmother for spare change to see a Hitchcock double bill and has a photograph of Truffaut above his bed), he sees through the volatile “Adela” immediately. Written On The Body Of The Night playfully demonstrates how the raging years of adolescence can combine with the tornado-like temperaments of three mercurial women under one roof to provide a filmmaker with a lifetime’s worth of movie raw material. Loving allusions to films streak by: a marquee announcing Amores Perros; or a cinephilic conversation about famous eye-patched directors (Ford, Lang, Walsh) and about how they preferred to use just one eye in order to simulate seeing a two-dimensional image.

Secret Love (Christoph Schaub, Switzerland, 2001)
In this German-language film set in Zurich, a deaf-mute nun falls in love with a raffish Lithuanian pickpocket. Schaub takes this potentially incendiary premise and turns his intense attention on the details. The film is a model of anti-sensationalism. The lead actress Emmanuelle Laborit is herself hearing- and speech-impaired, and her fiercely subtle performance and arresting presence are situated at the film’s center. Schaub is a fluent and sensitive director. (It takes a certain assured finesse to stage with understatement a scene in which a nun and her lover are kicked out of a hotel room because she is too noisy during love-making). Most of the dialogue is in subtitled sign-language.

Comment J’ai Tué Mon Père (Anne Fontaine, France, 2001)
The highlight of this Bergman-like family drama is a complex performance by the veteran actor Michel Bouquet. He plays a doctor/father who abruptly abandoned his wife and family decades ago and fled to Africa to dedicate his life to saving lives there. A crisis is precipitated by his return to Versailles to see his two sons, one a successful doctor and the other an unsuccessful stand-up comedian who also works as his brother’s chauffeur. The weight of the past hangs over these characters like an African elephant, and the film tackles the difficult issues of moral responsibility and loyalty. Its stripped-down style enables an intense psychological examination, and the abundance of close-ups seems to urge the characters to yield up all their secrets. (Thankfully, they never do—not completely or reliably anyway). Bouquet reminds us of his wonderful performances which were crucial to the films of Claude Chabrol’s great 1968-1973 period, like La Femme Infidele (1969) and Juste Avant La Nuit (1971). (Chabrol regarded him as a key inspiration and even dedicated Les Biches [1968] to him). Natasha Regnier convincingly plays Bouquet’s passive and tentative daughter-in-law, a radical departure from the brittle ferocity she incarnated in Dreamlife Of Angels (Erick Zonca, 1998) or Criminal Lovers (François Ozon, 1999).

Shrapnel In Peace (Ali Shah-Hatami, Iran, 2001)
The film opens with a woman, draped entirely in black, in a desert on a scorching day by the side of a crashed-and-burned-out jet fighter aircraft. She proceeds to dig a hole in the ground and gets into position right below the aircraft, lifting up an entire wing on her shoulders. She then moves it, Atlas-like, to the local scrap-metal dealer. Using long takes and a slowly examining camera, Shrapnel In Peace follows the interconnected lives of a group of battle-scrap scroungers, old and young, who live off the detritus of war and adapt such dangerous found objects to use in their own lives, living in abandoned and rusted-out boats or cooking their food in discarded, upturned helmets. By the time the inevitably tragic minefield denouement rolls around, the weight of symbolism has become a bit too much for the film to bear. Nevertheless, an impressive and visually confident film. Just when Western viewers were becoming familiar with the style and method of a decade-long cornucopia of Iranian cinema, comes another unique voice and approach to catalogue for future reference.

Fifteen (Yoji Yamada, Japan, 2001)
Young Daisuke, all of fifteen, runs away to take a trip to the southern tip of Japan to see an extraordinary 7000-year-old cedar tree. 70-year-old veteran director, Yamada, underlines this innocently mythic quest by contrasting it with Daisuke’s rigid and conformist environment at school and home. Over the opening credit sequence, the camera moves past a row of classrooms, students obediently hunched over their notebooks. Meanwhile, every encounter Daisuke has on his pilgrimage is with a character somewhat out of step with the norms and expectations of society. And it is these marginal people who teach him most about life. At one point in the film, a woman truck driver gives Daisuke a lift and then invites him to spend a few days with her family. He bonds with her unusually silent and precocious son, who writes Daisuke a farewell poem that likens the two of them to ronin, the masterless samurai. Fifteen is comprised of such contemporary ronin figures, too odd and modest to be recognized as exceptional by others, but revealing them to be quiet heroes nevertheless. The directness and humanism of this unsentimental film recalls Renoir and his assertion that as one grows older, one tends to value the eternal and the classical. A lesson in simplicity.

Delbaran (Abolfazl Jalili, Iran, 2001)
To once more attest to the staggering diversity and quality of contemporary Iranian cinema comes this strong film. Quite unlike his fellow directors (Kiarostami, the Makhmalbafs), Jalili’s style is audaciously montage-driven and furiously elliptical. The film focuses on a young boy, an Afghani refugee who works at a service station/inn and helps the elderly owner and his wife. The inn is located in a remote and arid mountainous region near the battle-wrought Afghan border. In a hostile world marked by vast distances between people and places, means of transportation (cars, trucks, motorcycles, all battered and dust-caked) are like veins and arteries. When they choke up or break down, they disrupt the most basic activities of life. Delbaran is comprised of everyday events and work, small chores and assignments – daily challenges that may appear amusing and risible to the Western eye but are in fact Herculean in the environment that the film is set. Delbaran is not so much interested in telling a story of one protagonist as it is in observing the lives and moments of people who are somehow connected by one place, Delbaran Inn. Its experimentalism and rigorous remove may prove an obstacle in securing distribution, which would be a shame. 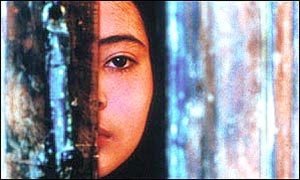 Baran (Majid Majidi, Iran, 2001)
This film is, like the previous one, about the plight of Afghanis in Iran. In terms of narrative style, the two films are polar opposites. Baran is as resolutely linear and deeply concerned with story as Delbaran is fragmented and uninterested in conventional narrative. At a construction site that largely employs illegal Afghani refugee labor, a young Iranian worker falls in love with a co-worker who is pretending to be male but is actually a woman. The love story occupies center stage, and the difficulties of Afghani families living and surviving undetected in Iran provides a poignant context for the courtship. Majidi’s films, if lacking in the rigor and complexity of other Iranian cinema, are possessed of great narrative pulse and a poetic touch. He also brings something new to this film, a scrambling physical comedy that recalls Buster Keaton or Kiyoshi Kurosawa. Although one fears for the commercial future of Delbaran, it is likely that no such struggle awaits Baran. (It turned out that Baran was the hit of the Festival, walking away with its top prize).

De L’amour (Jean-Francois Richet, France, 2001)
Richet’s first film, État des Lieux (1995, winner of the Cyril Collard prize in France for best first film), was a tract of Marxist provocation. De L’Amour, his third, is approximately equal parts working-class youth romance, police brutality exposé and revenge melodrama. Karim and Maria both work unrewarding factory jobs, her volatile personality contrasting with his relative solidity. Virginie Ledoyen brings an electric presence to Maria, demonstrating how a movie star can enhance the emotional impact a character can effect on an audience. In one scene in which Maria unsuccessfully attempts to shoplift lingerie, Ledoyen sparks with impatience and restlessness, making us believe every snap and twitch of her face and body. Equally convincing as her Muslim boyfriend is Yazid Ait, who also co-wrote the screenplay with Richet. Modest in ambition and style, and free of the swagger and gratuitous attitude that might have burdened some of its American indie counterparts, De L’amour insinuates itself into our graces precisely because of these humble virtues.

Après La Réconciliation (Anne-Marie Miéville, France/Switzerland, 2001)
For most of the duration of this film, a couple (played by Miéville and longtime partner Jean-Luc Godard) spend a day mostly in conversation with each other and with a younger man and woman. If one were asked to recall specific lines of dialogue upon first viewing, one would be hard-pressed to do so, and yet this was the most moving film I saw at the Festival. The film has a prologue, shot in digital video, in which Miéville interviews children about the meaning of language and speech, setting up the rest of the film in which torrents of words, ideas, formulations and negations function to accomplish two things: make sense of our existence through words, and thus simultaneously celebrate our existence obliquely, through poetry. Also contributing to the film’s power are the nuanced and affecting performances, most notably by Godard. An interesting example of how much a film can be saturated with choices that are anti-cinematic (heavy reliance on dense dialogue, “literariness”, functional camera setups, invisible montage, theatrical use of space and setting) and yet alchemize these choices to produce great cinema. The next time we propose a dogma about what makes great cinema, a film such as this serves to remind us that practice keeps ahead of theory. For every cinema-rule we formulate, a film proposes an exception.