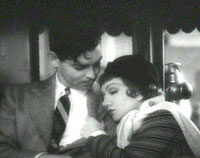 The grandparent of the screwball comedy sub-genre, and arguably Frank Capra’s best film, It Happened One Night set the pattern for many Hollywood comedies featuring the escapades of madcap heiresses that followed in its footsteps. The film’s trendsetting story starts when Elly Andrews (Claudette Colbert), daughter of immensely rich patriarch Alexander Andrews (Walter Connolly), just as stubborn as her “old man”, goes on a hunger strike after he has her abducted during her attempt to elope with playboy/aviator King Westley (Jameson Thomas). Elly and King are already married when Andrews’s people grab her, but the old boy is planning to have the marriage annulled because he considers the groom a lightweight fool. When push comes to shove, and Andrews in exasperation slaps his recalcitrant daughter, Elly cannot forgive his abuse. She jumps off the yacht on which she is being kept a prisoner and swims to freedom. Never before on her own, the lovely and spoiled Elly discovers working class Depression America and Peter Warne (Clark Gable), a proletarian journalist. They join forces, he to get her story and she to get his help in finding her way back to King. At first she finds neither Peter nor working class Depression America to her taste, but she discovers in both ultimately the sense of fun, capacity for loyalty, and pure guts that she has always found lacking in her own class. Warne can’t help being captivated by Elly’s charm, beauty, and pure guts despite his contempt for her uppity ways. After they realize they are in love, pride and misunderstanding threaten to part them, but irascible Mr. Andrews turns out to be “all right” in the end, as he clears up Elly’s misconceptions about Peter’s feelings about her and paves the way for true love to conquer all.

It Happened One Night revolutionized romantic comedy and men’s underwear. America was captivated by its feisty heroine and the film killed the sales of men’s undershirts when Gable took off his shirt to reveal an appealingly bare chest. It is full of classic scenes that have been imitated in subsequent films and television shows. Probably the most famous scene in the movie is the one in which, on their travels, Elly and Peter are forced to share a one-room motel cabin overnight and Peter, ever resourceful, hangs a blanket on a some rope to provide the debutante the privacy and respectability she demands. The by-play of Elly and Peter’s reactions on the separate sides of the blanket are brilliant evocations of what lies behind the facade men and women show one another in romantic situations. The old Hollywood, black and white film stock is particularly gorgeous in this scene, as Capra uses minimal light bounced off shining eyeballs and haloed hair. (One of the most widely seen allusions to this scene was in the immensely popular Luke and Laura story on American daytime television serial General Hospital in the early ’80s.) Almost as famous is the hitchhiking scene, in which macho Gable gets his comeuppance from ladylike (but naughty) Colbert. Reduced to walking the highways for a ride, Peter gives Elly a lengthy lecture on the art of hitchhiking only to be passed by a procession of automobiles staggered with brilliant comic timing by Capra. Elly then gives it a try, “and I won’t use my thumb.” Elly hitches up her skirt, bringing the first car to pass to a screeching halt with her lovely legs, leaving Peter with egg on his face. In a sense, the film is ahead of its time in gender definition. Elly will stand for no patriarchal control over her life. But as the story unfolds, it becomes clear that Elly cannot follow up on her bold words and gestures. She certainly has spirit, but she needs Peter to take care of her “in the real world.” She may be willing to take off on her own with nothing but the clothes she stands in (and the expensive jewelry) but she is ridiculously naive about money and cannot fend for herself. Without Peter to protect her, she is terrified, and often comes shrieking into his arms for protection, minutes after protesting her self-sufficiency. And she ultimately needs papa to tell her what she really wants.

There are also problematic class issues here. At first the film seems to be satirizing the very wealthy, criticizing their lack of social responsibility and sincerity and lauding the spirit of the average man. Indeed writer Robert Riskin in his long collaboration with Capra became known as the chronicler of the nobility and decency of the “ordinary Joe.” But Riskin’s reputation rings hollow now, as does the lip service given to democratic philosophy in It Happened One Night. There is much attention paid to the camaraderie of the “little people,” particularly in a charming scene on a long distance bus trip in which the passengers spontaneously get involved in a communal singalong. But tellingly, the bus driver’s participation causes inattentiveness to the road and the bus ends up in a ditch. Working class solidarity doesn’t get anyone anywhere, however charming it may appear. In the end, only the power elite has the real drive to accomplish and hold things together. Elly is just slumming. There is nothing but relief when she is reunited with papa and consequently will never again have to face the rigors of ordinary life. Moreover, if Peter has been appealing as a proud, peripatetic, proletarian king of the road, the film nevertheless asks us to be gratified that marrying Elly bumps him up to First Class on the passenger list of life.

It Happened One Night won the Academy Award for best picture of 1934 and was immensely successful in its time, as it continues to be. The film consolidated Gable’s screen image as a tough/tender independent cuss with sex appeal to spare. It rescued Colbert from typecasting as a big-eyed, half-naked vamp and led to many roles for her as a vivacious romantic comedy heroine. But the road to fame and fortune was full of twists and turns. The casting of Elly was particularly problematic. Colbert was not Capra’s first choice. Many actresses had turned the role down by the time Columbia pictures turned to her. Myrna Loy, one of the stars who rejected the part, claimed when she saw the script it was not the witty, spirited romp that eventually found its way to the screen, but a badly written, forced, and unpleasant hodge podge that contained not one character that rang true to life. It is not clear who was responsible for the resuscitation of the project, but the final cut of the film is a clever and insightful example of old Hollywood’s ability to speak meaningfully about the battle of the sexes, the constraints of the Production Code notwithstanding.