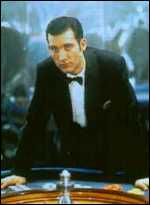 Clive Owen plays Jack Manfred, an aspiring writer who lives in a Chelsea basement flat with Marion (Gina McKee), his fetching roommate, who works as a department-store security agent.

Jack’s father (Nicholas Ball) calls one day to tip his son to a possible job at a flashy gambling casino, the Golden Lion. Although Jack has learned to be a croupier (dealer) in his South Africa homeland, he is reluctant to return to the pit, since he does not want to compromise his writing career. Jack takes the job, becoming once again familiar with the callous, parasitic conduct of a good croupier: be unfailingly polite but never engage customers in meaningful conversation; watch for cheating; wear black and white, no colors; offer no mercy. It is the ethics of humiliation, and provides director Mike Hodges the opportunity to explore the psychology of gambling, and the cold-blooded cultivation of greed and stupidity, as well as the exploitation of human weakness, desperation and credulity.

Ironically, the gambling lords expect heroic morality from croupiers. No cheating, no dates with customers or fellow employees, report violations or you go down with the violators. Jack scrupulously obeys only to learn while bumming a ride home with a fellow dealer, whom Jack observes skimming money to customers by returning winnings in more expensive chips than were originally bet, that sex, drugs, card-games, and all-night carousing is common within the industry.

Much worse, Jack is attracted to a beautiful customer, Jani de Villiers (Alex Kingston), whose table techniques suggest near expert knowledge of wagering, but oddly plays only occasionally. Eventually, she lures Jack into a scheme to rob the casino, the resolution of which provides viewers with a nice surprise ending without resorting to car chases, karate fighting, lurid sexual encounters, or sophomoric moralizing.

Mike Hodges, whose previous directing credits include Get Carter (1971), The Terminal Man (1974), Flash Gordon (1980), Prayer For The Dying (1987), and Black Rainbow (1990), raises the issue of an artist’s relationship with his subject. Jack Manfred is repelled by the exploitive nature of dealing cards, but at the same time is drawn irresistibly to it as a primary source of plot material for a novel. He turns out an anonymous novel, “I Croupier”, based on his recent job experiences, but can only tolerate continuing to work in the casino by detaching himself emotionally from the miserable ease of taking money from the gullible and desperate. In effect he reverses the artist/subject relationship, withdrawing from those whose sins have made Jack the successful writer he has long aspired to be.

This gives Croupier a decidedly counter-modernist theme. Jack finds no redemption in art. He finds success, but his work does not critique social ills, does not create a transcendent artistic vision, and does not offer a story of personal salvation or affirmation through creativity. In Croupier we must dine on Darwin not Joyce or Thomas Mann.

Even so, this ambivalence about the redemptive value of art does not efface the authorial voice of the film. It explores the psychology of Jack Manfred, whose internal musings structure the film and carry the narrative. His comments, criticisms, observations, excuses and private dialogue with himself are imposed on top of the events of the film. In effect Croupier is a novel in the making. Jack Manfred, as author, sets down the crucial events of his life in order of importance, ignoring what does not seem to point him in the direction he has chosen, while elevating what he thinks is significant to a place of prominence.

Of course, exactly what he has chosen is open to the interpretation of viewers, just as would happen in reading a novel. Does he immerse himself in gambling esoterica, lightly outwitting the fools who flock to the tables to give away their money? Does he remain aloof from the hardscrabble world of cheating one’s fellow man, to create art, to write novels, to comment upon humanity? Does he cultivate Marion’s stubborn, demanding love, wallow on the floor with willing female dealers who dress and undress in front of him in the employees’ locker room, or become a rip-off artist and criminal by joining in the plot to rob the casino? As viewer/reader we are not certain, and can easily get lost in Jack’s art versus life dilemma. Sometimes Jack interprets his experiences in ways that seemingly contradict the obvious. But we must check our urge to impose our opinions on what Jack goes through, because as with all art, what it means depends on how you look at it.

Croupier has a hard edge I associate with Mike Leigh (Naked 1997; Career Girls 1999). It is compact, gritty, realistic, and psychologically taunt. The women are simultaneously users and used, eliciting pity and shame at their misuse, but sober reflection from their participation in dubious emotional attachments, dangerous sexual liaisons, and deceit.

I enjoyed the London setting, reminding me of early 1980s days working on a dissertation in the circular reading room of the British Library. But the London of Croupier is not Great Russell Street. Instead, it is a city of kick-butt reprisals, money-driven, survival-of-the-fittest relationships, and pandering to human greed and hopelessness. No one visits the homeless outside Blackfriars Station or passes out gospel tracts to East End heroin addicts. Croupier London is an arena of tragedy, human failure, and disappointment, where one person lives off the pathetic aspirations and sinful desires of incompetent punters and amoral moneygrubbers.

Croupier is an interesting film. It came out in 1998 but raised no flags on this side of the pond. In Germany, reviewers wrote about it as though another Fassbinder or Herzog had appeared, but it is not that alarming or ominous to deserve such attention. It is worth the time to view. It will baffle Anglophiles and provide psychology majors and cinema buffs much to talk about.

Croupier is distributed in the U.S. by The Shooting Gallery, a Loew’s film series of independent and foreign films released initially in multi-screen outlets.