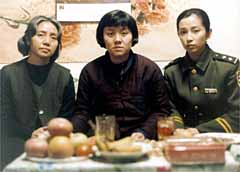 There are two films at this year’s festival by Zhang Yuan, a leading member of the Sixth Generation of the Chinese cinema. He demonstrated his considerable powers as a filmmaker in the explosive East Palace, West Palace (1996), a profoundly unsettling account of an encounter between a conscientious policeman and a provocative young gay man who loiters in a Beijing park and pursues the policeman obsessively. This director’s ability to build up dramatic tension slowly but surely, to elicit moving performances from his actors, and to use both outdoor and indoor settings very tellingly is demonstrated again in Seventeen Years (1999), a family melodrama about the return to the parental home after 17 years in prison of a daughter who has murdered her step-sister. The difficult family reunion is faced with the help of a sympathetic young female prison warden. Seventeen Years, which screens in the Regional Focus of this year’s Melbourne International Film Festival, is a moving film that is beautifully wrought but ultimately quite hermetic in comparison with both East Palace, West Palace and Crazy English (1999), the other Zhang Yuan film showing at this year’s Festival.

Like Zhang’s Beijing Bastards (1993) and The Square (1994), Crazy English is a documentary. It introduces us to Li Yang, a madly successful teacher of conversational English who conducts mass teach-ins all over China in all manner of public spaces – sports stadia, campus auditoria, school assembly yards, the Great Wall of China, the Marco Polo Bridge – and in all weathers to primary, secondary and tertiary students, to the personnel of the People’s Liberation Army, to teachers, bureaucrats and businesspeople. He has them beaming, gesturing and shouting in unison snatches of English conversation – “How are you?”, “Thank you!”, “You’re welcome!”, “Good, better, best”, “Beautiful!”, “I want to be somebody some day!”, “You had better study hard!”, “No pain, no gain” – as well as the defiant assertion, “I enjoy losing face!” In interviews and public appearances, he promotes the learning of English as a patriotic duty and a means of self-improvement, a way for China to gain “international muscle” and make money so that they can take over the three major international markets of Japan, the United States and Europe. A dynamic and motivational demagogue and teacher, Li Yang is a self-made man, an academic failure, whose phenomenal success is educationally instructive if disturbing in its political overtones. Audiences respond to him as they do to a pop star or a charismatic political dictator – they follow the leader with passion and zest. This is a fascinating film – for China watchers, for educators and for fans of the documentary film – and is an absolute must for festival patrons.

Aficionados of ghost stories (known in Japanese as Kaidan) should take the opportunity to see Nang Nak (1999), a Thai version of this traditional East Asian genre. Those of you familiar with Kwaidan (Kobayashi, 1964), Ugetsu Monogatari (Mizoguchi, 1953) and sundry Chinese ghost stories will know that the ghost is nearly always a beautiful young woman who has been deserted by her errant or faithless husband and comes back to wreak havoc on the living; and that the Buddhist monks alone know how to exorcise her spell. This Thai ghost is a clinging vine who thoroughly dupes her husband and gives the monks a very hard time. Its insidiously languorous mood and its remote and isolated rural river-bank setting, far from the modern world, give this film a timeless quality well suited to the genre.